TEWKSBURY, MA -- Both Rangers squads were back in action this past weekend as the EHL team dropped their first game of the week, but won both matchups at the showcase, outscoring their opponents 10-3 in the process. After the weekend, the EHL squad sits in 6th place in the New England Conference with a record of 3-2-0.

On the other end, the EHLP team took care of business in both of their games over the weekend, bringing their record up to 4-1-0 and moving them into 3rd place in the conference.

On Friday, the Rangers traveled down to Hyannis for the first of four matchups against the Seahawks Hockey Club this season. The Seahawks grabbed the early lead in the 1st period, then added another goal in the 3rd, and won the game by a final score of 2-0. Billy Girard was solid between the pipes, stopping 36 shots in the loss.

The first EHL Showcase of the 2019-20 season kicked-off on Sunday, and the Connecticut Roughriders were the day #1 opponent. Joey Schaefer got the Rangers on the board first, with a goal around the 13:00 mark of the frame. Just over a minute later, Andrew Keith made it a 2-0 game with a goal on Rangers first power-play of the contest. However, the RoughRiders responded with a pair of power-play goals of their own, just 32 seconds apart, and knotted up the game at two goals apiece. Brent Rickett gave the Rangers back the lead just a minute later though to give the squad the 3-2 advantage into the break. The power play units continued to click for the Rangers in the 2nd half, as Will Fisher notched a pair of goals on the man advantage, putting them at 75% (3/4) for the day. Both Connor Galloway and Connor Bizal also added 2nd half goals, as the Rangers cruised to a 7-3 win. Girard stopped 28 shots and also had an assist in the winning effort. Connor Doherty collected a trio of assists in the win, while Mitchell Haight and Galloway both earned a pair.

On day #2 of the showcase, the Rangers squared off against the Philadelphia Jr. Flyers for the first and only time this season. Jake Blackwell got things going with a goal near the end of the 1st half to give the Rangers the lead. Not long after, Doherty made it a two-goal game for his 4th point of the showcase. Jonah Nash added an insurance goal in the 2nd half and the Rangers walked away from the first showcase winning both of their matchups. Girard had 22 saves in the 3-0 shutout win, giving him three total wins now on the young season.

On Saturday, the EHLP team traveled to Worcester to kick off a six-game season series against the Railers Jr. Hockey Club. After going down 1-0, the league’s leading scorer, Johnny Malandruccolo, tied things up with a power-play goal near the 11-minute mark of the frame. The Railers responded with a pair of power-play goals themselves though, to take a 3-1 lead into the intermission. Derek D’Arcy cut the lead in half at the 14:15 mark of the period, but the Railers added another power-play goal to take the two-goal advantage back. Just a couple minutes later however, Ryan Bailey made it a 4-3 game and the Rangers trailed by one heading into the final intermission. Around the 14-minute mark of the 3rd, Jackson Drysdale squared things up at four with Malandruccolo on the assist. The Railers took a penalty at the halfway point of the period, and Bailey capitalized a minute into the power-play to lead the Rangers to a 5-4 win. Cam Libby stopped all 14 shots he faced in relief for the win.

On Sunday, the Valley Jr. Warriors came into town for the first of six matchups this year. Matt McPherson gave the Rangers the early lead with a goal at the 15:24 mark of the 1st period. After a scoreless rest of the frame, the Warriors tied the game early in the 2nd period, but it was short lived as Max Stephens gave the squad back the lead near the 12-minute mark. Bailey added two more goals later on in the period to give the Rangers a 4-1 lead heading into the 3rd. The Rangers then added five more goals in the final 20 minutes and cruised to a 9-2 win. Quinn Shepard, Stephens, Malandruccolo (2), and Drysdale had the 3rd period tallies, while Libby stopped 22 shots for his 2nd win of the season.

Both Rangers squads are back in action this weekend as the EHL team will travel to Bedford this afternoon for a matchup against the East Coast Wizards at 1:00pm, followed by a game on Saturday night against the Railers Jr. Hockey Club at Stoneham Arena at 8:30pm.

The Premier squad is back in action on Sunday at 11:00am against the Railers, with the game also being played at Stoneham Arena. 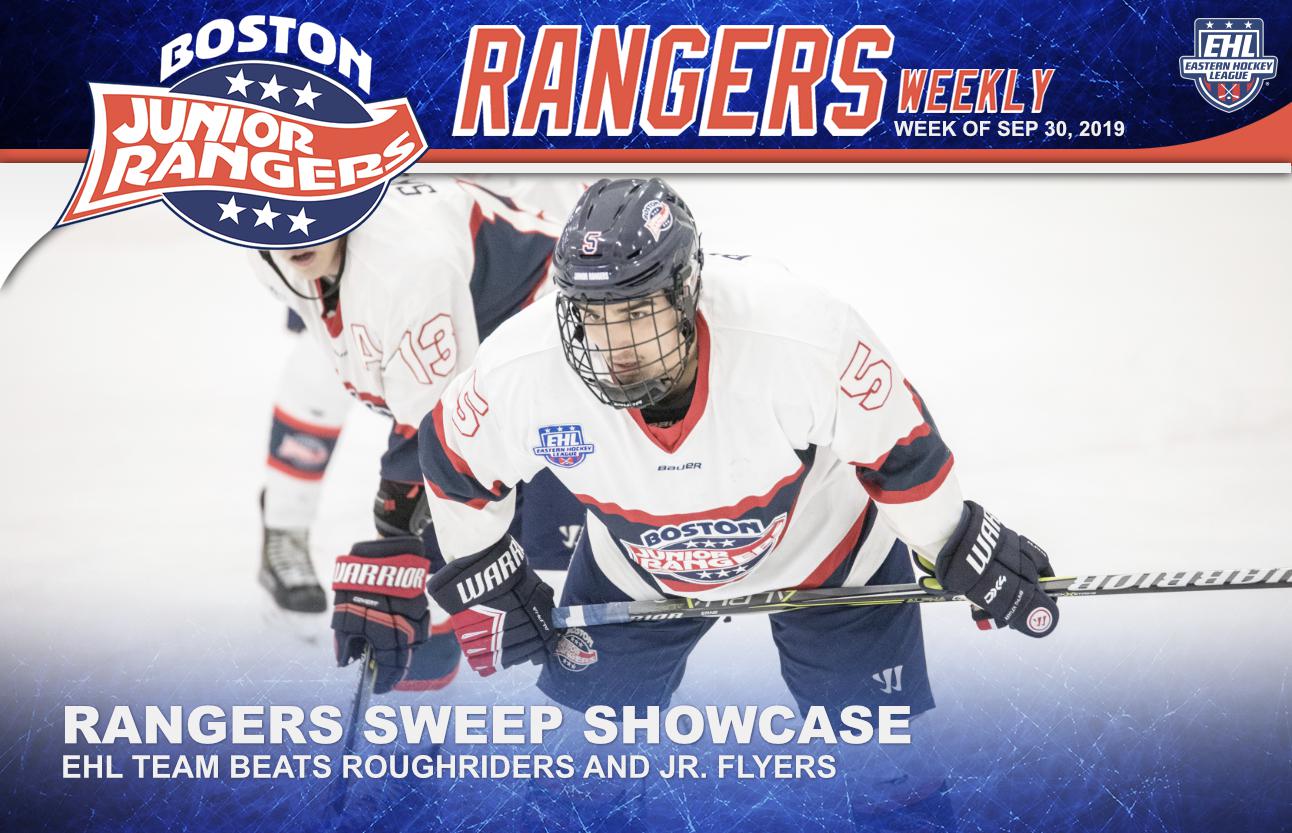