TEWKSBURY, MA -- Both Rangers squads posted perfect records at each showcase this past weekend down in Pennsylvania. The EHL team extended their winning streak out to six games with a pair of wins, and then made it seven in a row with a victory over the Valley Jr. Warriors on Wednesday. The Rangers' top team heads into the weekend with a record of 8-2-0, which is good for 4th place in the New England Conference.

As for the EHLP team, they are now on a five-game winning streak thanks to a pair of huge victories down in West Chester. The Rangers are currently 7-1-0, and in 4th place as well in the New England Conference.

Sunday marked the first day of the second league-wide EHL Showcase of the season, and the Rangers had their hands full on day #1 with a matchup against the New Jersey 87s. The 87s came into the showcase ranked #2 in the EHL Power Rangers, and were ready to go for the only regular season matchup between the two teams this year.

Connor Bizal gave the Rangers the early lead just over three minutes into the game on the power-play, for his first of five goals on the weekend for the Minnesota native. The 87s answered back with a goal just 44 seconds later, to even things up, but Nathan Young gave the boys back the lead near the 16-minute mark of the half. Brent Rickett then found the back of the net just a few minutes later, and that to put the Rangers up by two. After a scoreless rest of the half, Bizal converted on the power-play once again, early in the next frame and gave the Rangers a commanding 4-1 lead. Nate Matthews added an insurance goal later in the half for his first tally of the season, and the Rangers cruised to a 5-2 win. Both Connor Doherty and Tom Skold collected a pair of assists, while Billy Girard stopped 27 shots for his 5th win of the year.

On day #2 of the showcase, the Rangers squared off against the North Carolina Golden Bears. Rickett and Mitch Gillespie scored two quick 1st half goals and the Rangers didn't look back from there as the goals kept on coming. Young, Connor Galloway, and Nick Weaver also found the back of the net in the frame and the Rangers took a 5-0 lead into the break. The 2nd half didn't play out any differently, as Bizal completed a hat-trick, scoring three times in the frame. Galloway, Mitch Haight, and Andrew Keith added three more goals in the period, and Rangers went on to win by the final score of 11-0. Karlis Reinis-Riba stopped six shots for his 1st win and shutout of the season.

Fast-forward to Wednesday and the Ranger's All-Star netminder was back between the pipes. Girard was excellent against the Warriors, turning aside all 29 shots that were sent his way. The veteran netminder is one of three Rangers players set to join the EHL All-Star Team next week, and he'll be joined by Connor Doherty and Mitchell Haight. It's also worth noting that Haight, a three-year veteran defenseman, will serve as one of the team's assistant captains.

On the first day of the showcase, the EHLP team faced-off against the New York Bridgemen, marking the first and only matchup against the Mid-Atlantic opponent this season.

It didn't take long for things to get going as Matt McPherson got the Rangers on the board with a goal just 36 seconds into the game. Javen Heidergott followed up with another goal just a few minutes later, and the flood gates opened up from there. Johnny Malandruccolo scored four times while both McPherson, and Derek D’Arcy each notched a pair. Stephen Johnson, Daniels Docenko-Svirido, and Nick Snyder also had goals in route to a 12-0 win. Matt Morrison stopped all 13 shots that he faced for his 1st win and shutout of the year.

On Monday morning, the Rangers matched up against the Connecticut Chiefs for the 1st of five meetings against their conference opponent this season. Johnson got the boys off to a hot start, scoring twice in the 1st half and gave the Rangers a 2-0 advantage. Ryan Bailey added a short-handed goal near the end of the frame, followed by a Snyder tally to extend the lead out to four goals. The 2nd half was also all Rangers, as they found the back of the net six more times and cruised to a 10-0 victory. Logan Palmer joined the group of Rangers goalies with a shutout this season, stopping 13 shots along the way.

Both Rangers squads are back in action this weekend as the EHL team is set to face-off against the New England Wolves in a home-and-home series on Saturday and Sunday. Saturday’s matchup is scheduled for a 6:30pm puck drop in Laconia, NH, while Sunday’s game will be played at the Breakaway Ice Center at 2:00pm.

The Premier squad on the other hand, will host the New Hampshire Avalanche on Saturday night at Stoneham Arena starting at 8:30pm, followed by a game the next morning against the Wolves at 11:00am, which will also take place in Stoneham. 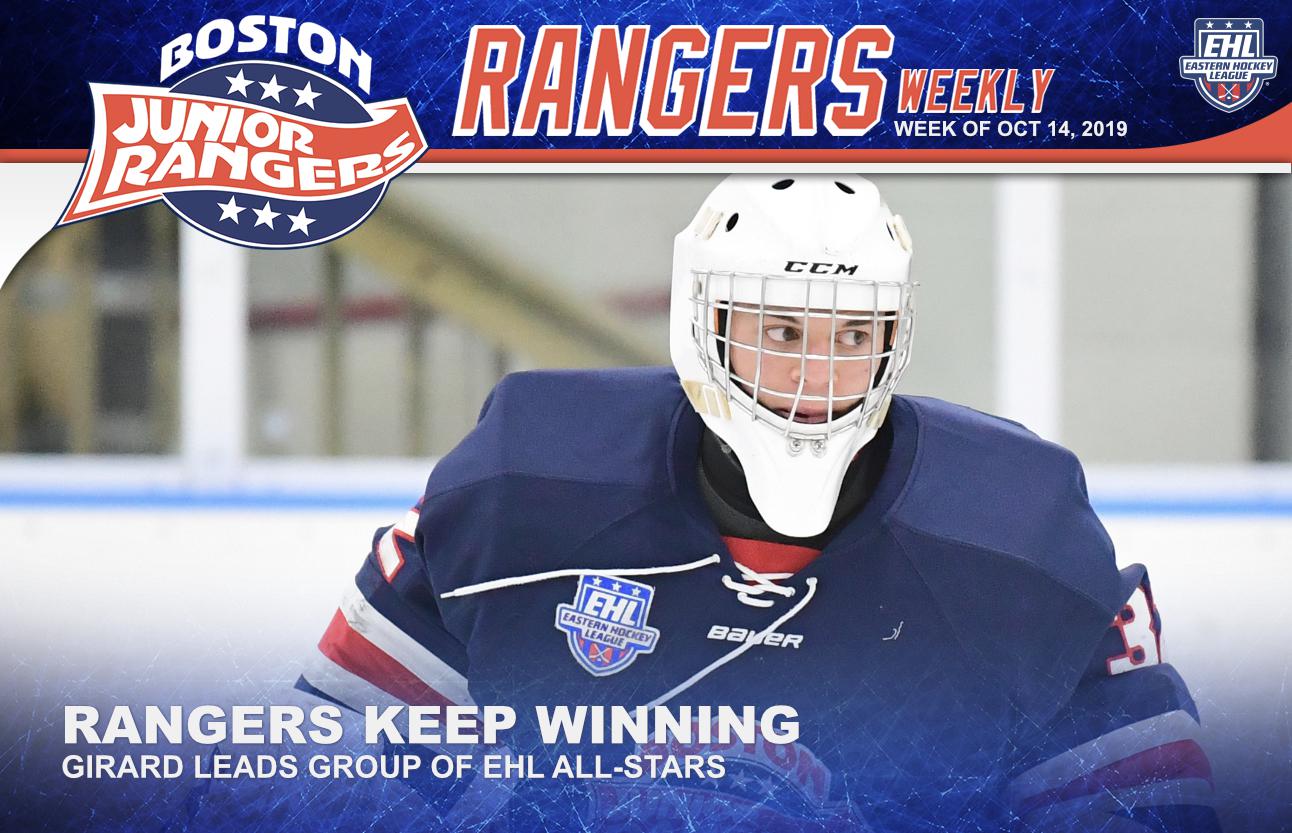