TEWKSBURY, MA -- Both Rangers squads were back in action this past week, as the EHL team went 2-1-0 over their three games and stayed in 4th place in the New England Conference with a record of 9-3-0.

The EHLP team saw their five-game winning streak come to an end last Saturday, but bounced back with a win the very next day to remain in 4th place in their conference with a record of 8-2-0.

On Wednesday, the EHL squad traveled to Haverhill to face-off against the Valley Jr. Warriors for the second of four matchups this season. The Rangers won the first game between the two teams back on the very first game of the season by a score of 2-1. Brent Rickett got things started on Wednesday, giving the Rangers the lead on the power play in the winding seconds of the 1st period. Tommy Carr scored his first goal of the season 15 minutes into the 2nd frame to give the boys a 2 goal advantage. Martin Pietraszek put the game out of reach with a power play goal at the halfway point of the 3rd followed by another insurance goal from Rickett and the Rangers cruised to a 4-0 win. Connor Doherty found the scoresheet 3 times with a trio of assists in the win while Jake Blackwell collected a pair. Billy Girard stopped all 29 shots that he faced in route to his 2nd shutout of the season and the Rangers extended their winning streak out to 7 games.

On Saturday, the Rangers traveled to Laconia for the first game of a home and home series against the New England Wolves. Saturday’s matchup marked the first of three games against their divisional opponent this season. After a scoreless 1st period, Nathan Young put the Rangers on the board first with his 3rd goal of the season just 1:15 into the 2nd frame. The Wolves tied things up with a power play goal just a couple minutes later but Rickett gave the Rangers back the lead at the 12:39 mark of the period. After the Wolves took a pair of penalties near the 9:00 minute mark, both Mitchell Haight and Blackwell scored power play goals to put the Rangers ahead 4-1 after 2 periods. Doherty found the back of the net halfway through the 3rd for his 4th point of the night and Haight added another goal a few minutes later to put the game out of reach. Girard stopped 30 shots in the 6-2 win for his 7th victory of the season.

On Sunday, the squad returned to Tewksbury for the second leg of the home and home series and fell behind just 1:12 into the contest. Blackwell evened things up though at one goal a piece near the 9:00 minute mark of the period for his 4th tally of the season. However, the Wolves converted on the man advantage near the end of the frame and again in the 2nd period to take a 3-1 lead. Just 8 seconds after the 2nd Wolves’ power play goal, Connor Bizal scored off the ensuing face-off to cut the deficit down to one goal. The Wolves were able to hold on in the 3rd despite being outshot 15-8 and beat the Rangers by a final score of 3-2. Girard stopped 31 shots in the losing effort.

On Saturday, the EHLP team squared-off against the New Hampshire Avalanche for the second of five matchups between the two teams this season. The Avalanche won the first game 6-2 back in September and got off to an early start on Saturday, scoring 3 times in the first period to take a quick 3-0 lead. Johnny Malandruccolo put the Rangers on the board just 1:24 into the 2nd frame, followed by another tally from Jackson Drysdale to cut the deficit down to one goal. However, the Avalanche responded with a a goal late in the 2nd period and another early in the 3rd to take the two goal advantage back. Despite a late tally from Matt McPherson, the Rangers fell by a final score of 5-3. Logan Palmer stopped 30 shots in the loss.

On Sunday, the Rangers hosted the Wolves for the second of four matchups between the two teams this season. The Premier squad won the last matchup against the Wolves in overtime back in September. After falling behind 1-0, Malandruccolo evened things up at the 12:28 mark of the 1st period. Max Stephens found the back of the net with a shot from the point near the end of the frame to give the Rangers a 2-1 lead going into the break. Ryan Bailey gave the Rangers a two goal advantage just under 4 minutes into the 2nd period but, the Wolves responded with a pair of quick goals to knot the game up at 3 goals a piece. McPherson gave the Rangers back the lead near the end of the 2nd and Stephen Johnson followed with another goal early in the 3rd to make it a 5-3 game. After the Wolves made it a one goal game again, Malandruccolo gave the Rangers some insurance with just over 3 minutes reaming in the game with a highlight reel goal and his league leading 19th of the season. Palmer was busy between the pipes, stopping 35 shots for his 5th win of the season.

The EHL team is off this week for the EHL All-Star Break, as Connor Doherty, Billy Girard, and Mitchell Haight get set to represent the Rangers in the three games against NCAA Division III opponents. Haight, a three-year veteran defenseman, will serve as one of the assistant captains for Team EHL.

The EHLP team on the other hand, will just play one game this Sunday at Breakaway Ice Center against the Walpole Express at 1:50pm. 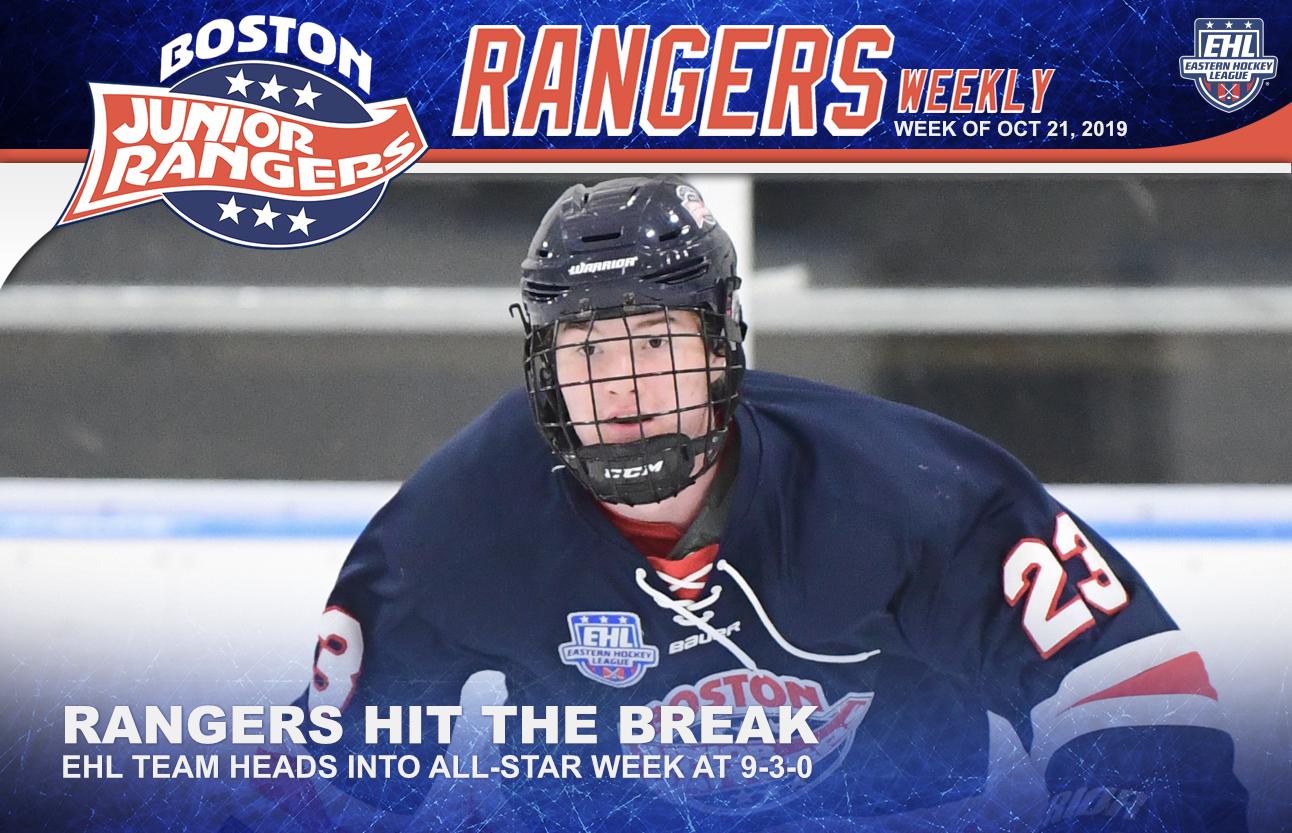