TEWKSBURY, MA -- Both Rangers squads were back in action this past week after the All-Star break as the EHL team won both of their games to move them into a tie for 3rd place in the New England Conference with a record of 11-3-0.

The EHLP squad also took care of business winning all 3 of their games, and now sit in a 3-way tie for 2nd place in their conference with a record of 11-2-0.

On Friday the 1st, the EHL squad traveled up to Exeter to face-off against the Seacoast Spartans for the first time this season. Friday’s matchup marked the first of four games against their conference opponent for the year. Jonah Nash put the Rangers on the board near the 9 minute mark of the 1st period. Just under 2 minutes later, Martin Pietraszek, made it a 2-0 game after converting on the man advantage. After a scoreless rest of the frame, The Spartans bounced back with a pair of goals just 26 seconds apart early in the 2nd frame to knot up the score at 2-2. However, Andrew Keith gave the Rangers back the lead near the halfway point of the period for his 5th goal of the season. Connor Galloway and the rest of the Rangers dominated the 3rd period as Galloway notched a pair of goals in the frame including a power play tally. Mitchell Haight, collected assists on both of Galloway’s 3rd period goals and Nash added some insurance late in route to the 6-2 win. Billy Girard stopped 21 shots between the pipes in the victory.

The Rangers returned back home on Sunday afternoon for a matchup against the Valley Jr. Warriors. The EHL squad held a 2-0-0 record against the Warriors this season coming into Sunday, beating them by a combined score of 6-1 in those 2 games. The Warriors took the early lead in the first period on an unlucky bounce, but Galloway continued his hot weekend with a goal in the first minute of the 2nd period to tie the game at 1-1. After the Warriors took the lead again, Galloway responded yet again with a short handed goal this time, to even things up at 2 goals apiece with around 13 minutes remaining in the contest. Will Fisher gave the Rangers their first lead of the game on the power play near the halfway mark of the frame and they didn't look back from there. Both Haight and Connor Bizal added insurance goals late in the frame and the Ragners went on to win by a final score of 5-2. Girard made 22 saves in route to his league leading 9th win of the season.

Last Sunday on the 27th of October, the EHLP squad kicked-off their 3-game series against the Walpole Express in Tewksbury. The Rangers beat the Express on the first matchup of six between the two teams by a score of 5-1 back on the very first game of the season. Ryan Bailey put the Rangers on the board first with a power play goal just under 7 minutes into the game. October’s EHLP Forward of the Month, Johnny Malandruccolo, made it a 2-0 game near the halfway point of the period and the Rangers didn't look back from there. Nick Snyder added another goal near the end of the frame and then both Jackson Drysdale and Derek D’Arcy scored a pair of quick goals early in the 2nd period to make it 5-0. The Express responded with a pair of power play goals, but both Baily and Snyder scored in the 3rd to put the game out of reach. Chance Settles notched his 1st goal of the season in the winding minutes as the Rangers cruised to an 8-2 win. Cam Libby stopped 24 shots for his 3rd win on the year.

On Saturday the 2nd, the Rangers traveled down to Rodman Arena in Walpole for game #2 of the 3 game set. It didn't take long for the Rangers to get going as Malandruccolo gave the boys the early lead just 33 seconds into the game. The Express fought back with a pair of goals later on in the frame to take a 2-1 lead into the 1st intermission. Around the halfway point of the 2nd period, Malandruccolo scored his 2nd goal of the game, this time on the man advantage to knot up the game at 2-2. At the 6:48 mark of the frame, Bailey scored 2 goals just 11 seconds apart to give the Rangers a 4-2 lead. However, the Express responded with a power play goal in the final minutes of the 2nd and another goal late in the 3rd period to force overtime. The overtime period only lasted one minute though, as Malandruccolo completed the hat trick for his league leading 23rd goal of the season. Matt Morrison stopped 35 shots in the 5-4 win for his 2nd victory of the year.

On Sunday the 3rd, the Rangers aimed for the 3-game sweep of the Express and got off on the right foot with a trio of 1st period goals by D’Arcy, Matt McPherson, and Quinn Shepard. Bailey scored his 14th goal of the season and put the Rangers ahead 4-0 with a goal just 17 seconds into the 2nd frame. Emils Zelcs scored his first goal of the season in the final minute and the Premier squad won by a final score of 5-0. Logan Palmer stopped all 29 shots that he faced for his 2nd shutout and 6th win of the season.

Both Rangers squads will get back to work this upcoming week with busy slate of games. The EHL team will face-off against the Railers Jr. Hockey Club tomorrow in Worcester at 11:30am before the 3rd league wide showcase of the season which is set to kick-off on Sunday in Haverhill. The Rangers will matchup against the New York Applecore at 2:20pm on Sunday, followed by a game against the Philadelphia Little Flyers on Monday at 10:50am.

On the other end, the EHLP squad will face-off against the Connecticut Chiefs on the road on Friday at 7:40pm before their own league wide showcase which is set to start on Sunday at the Chelmsford Forum. The Premier team will play the New Jersey 87s at 12:10pm and then the Philadelphia Revolution at 8:00pm on Sunday and will finish the showcase against the Philadelphia Little Flyers on Monday at 2:45pm at the Lawerence Valley Forum. 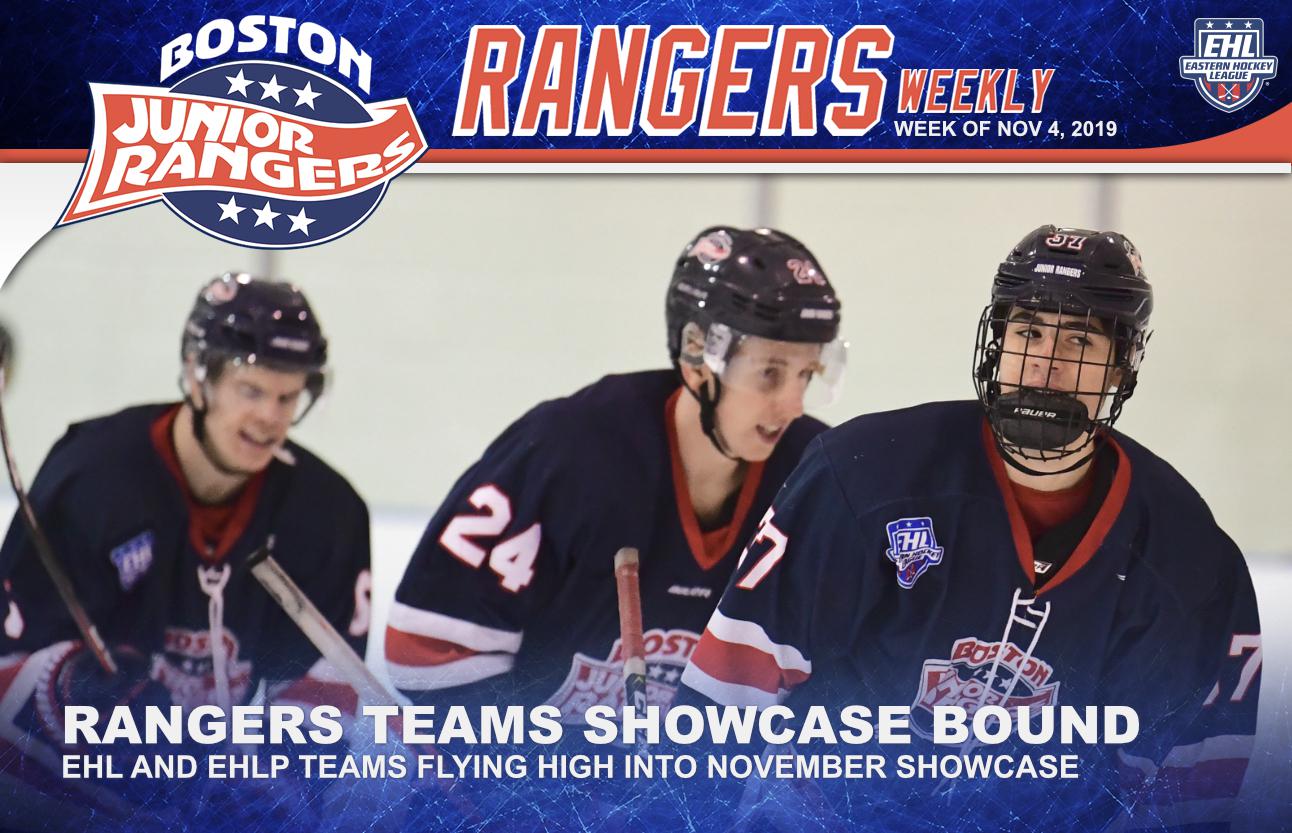