TEWKSBURY, MA -- Both Rangers squads were back in action this past week as the EHL team took over the top spot in the recent EHL Power Rankings, after winning all three of their games. With the wins, the Rangers now sit in 1st place in the New England Conference with an overall record of 17-4-0.

The Premier squad posted a 1-1-0 record for the weekend, and are now currently in a tie for 3rd place in their conference with a record of 15-4-0.

On Thursday, the EHL squad welcomed the Seacoast Spartans into town for an afternoon game. Last week’s matchup marked the 2nd of 4 games between the two conference opponent this season. The Rangers won the first battle by a score of 6-2 back on the first day of November and were looking for a similar result on Thursday. Just over 3 minutes into the game, Nick Weaver beat the Spartans goalie on the backhand in the slot for his 3rd goal of the year to give the Rangers the early lead. Brent Rickett rifled a shot in from the point on the power play near the end of the frame to give the boys a 2-0 advantage. Around the halfway point of the 2nd period, Joey Petronack scored his first goal of the year and extended the lead out to 3-0. Joey Schaefer added an empty net goal in the final minutes as the Rangers cruised to a 4-0 win. Ben Greenlee stopped all 24 shots that he faced for both his 1st shutout and win of the season.

On Saturday night, the Seahawks Hockey Club came into town for the 2nd of 4 matchups between the two conference opponents this season. The Rangers dropped the first game against the Seahawks back in September on the road. After a scoreless 1st period, Andrew Keith, put the Rangers on the board first just 48 seconds into the 2nd frame. The Seahawks tied the game up later on in the period but Keith scored again early in the 3rd, this time on the power play, to give the Rangers a 2-1 lead. However, the Seahawks tied the game up again just 37 seconds later but took a penalty in the closing minutes of the 3rd to put the Rangers up a man. On the man advantage, Connor Bizal found the back of the net for his 12th time this season and was credited with the game winning goal as the Rangers won by a final score of 3-2. Billy Girard was solid between the pipes, stopping 26 shots in the win.

On Sunday afternoon, the EHL squad capped off their week with a matchup against the East Coast Wizards. Going into Sunday’s game, the Rangers have already played and beat the Wizards once this season, dating back to early October and are scheduled to play their conference opponent two more times next month as well. The Wizards took the lead early in the 2nd frame after a scoreless 1st, but Will Fisher responded with a power play goal from the point to knot the game up at 1 goal a piece. Schaefer gave the Rangers the lead near the end of the frame with a shot from the high slot for his 7th goal of the season. Tanner Coleman potted his first goal of the season in the 3rd period to extend the Rangers lead and Keith added an empty net goal in the final minute as the Rangers won by a final score of 4-1. Girard stopped 29 out of 30 shots in net for his league leading 12th win of the year.

Yesterday, the Rangers faced-off against the Seacoast Spartans again for the 2nd time in as many weeks. Jake Blackwell put the Rangers on the board first with a goal near the end of the 1st period, but the Spartans rallied for a pair of quick goals not long after to make it a 2-1 game. However, Blackwell found the back of the net yet again, this time near the 6 minute mark of the 2nd period to knot up the game at 2-2. Nash tacked on another goal late in the frame to give the Rangers a 3-2 advantage. The Rangers kept up the pressure in the 3rd period with a trio of goals and won the game by a final score of 6-3. Rickett, Weaver, and Malandruccolo collected the 3rd period tallies. Karlis Reinis Riba was solid in net, stopping 23 shots for his 3rd win of the season.

On Friday night, the EHLP squad traveled to Haverhill for a matchup against the Vally Jr. Warriors. The Rangers beat the Warriors back at the end of September and have 4 more matchups against their conference opponent after Friday’s game. Matt Noe scored his first goal with the Rangers around the halfway point of the 1st to give the boys the early lead. However, the Warriors responded with a pair of goals before Nick Snyder found the back of the net for the 9th time this season to square things up at 2-2. The EHLP’s leading scorer, Johnny Malandruccolo, gave the Rangers the lead on the man advantage near the end of the 2nd frame and also added some insurance with another power play goal in the 3rd to lead the Rangers to a 4-2 win. Malandruccolo had 4 points and both Synder and Ryan Bailey each collected a pair of assists in the win. Matt Morrison stopped 14 shots between the pipes for his 3rd win of the year.

On Sunday afternoon, the Rangers traveled to Worcester for a matchup against the Railers Jr. Hockey Club. The Premier squad already beat the Railers in two close battles this season and have 3 more games against their conference opponent after Sunday’s matchup. After falling behind 2-0 early in the 1st period, Stephen Johnson, cut the deficit in half with a goal around the midway point of the frame. However, the Railers responded with 3 answered goals and took a 5-1 lead into the final intermission. Despite 3rd period goals from both Matt McPherson and Malandruccolo, the Rangers fell by a final score of 6-3 to their conference opponent.

The Rangers will get back to work this upcoming weekend with a matchup against the the New Hampshire Avalanche on Saturday at 4:20pm, followed by a matchup the very next day against Walpole Express at 2:00pm.

On the other end, the EHLP team will host the Connecticut Chiefs at home this Saturday at 7:45pm, and then will turn around and travel to Laconia on Sunday to face-off against the New England Wolves at 2:15pm. 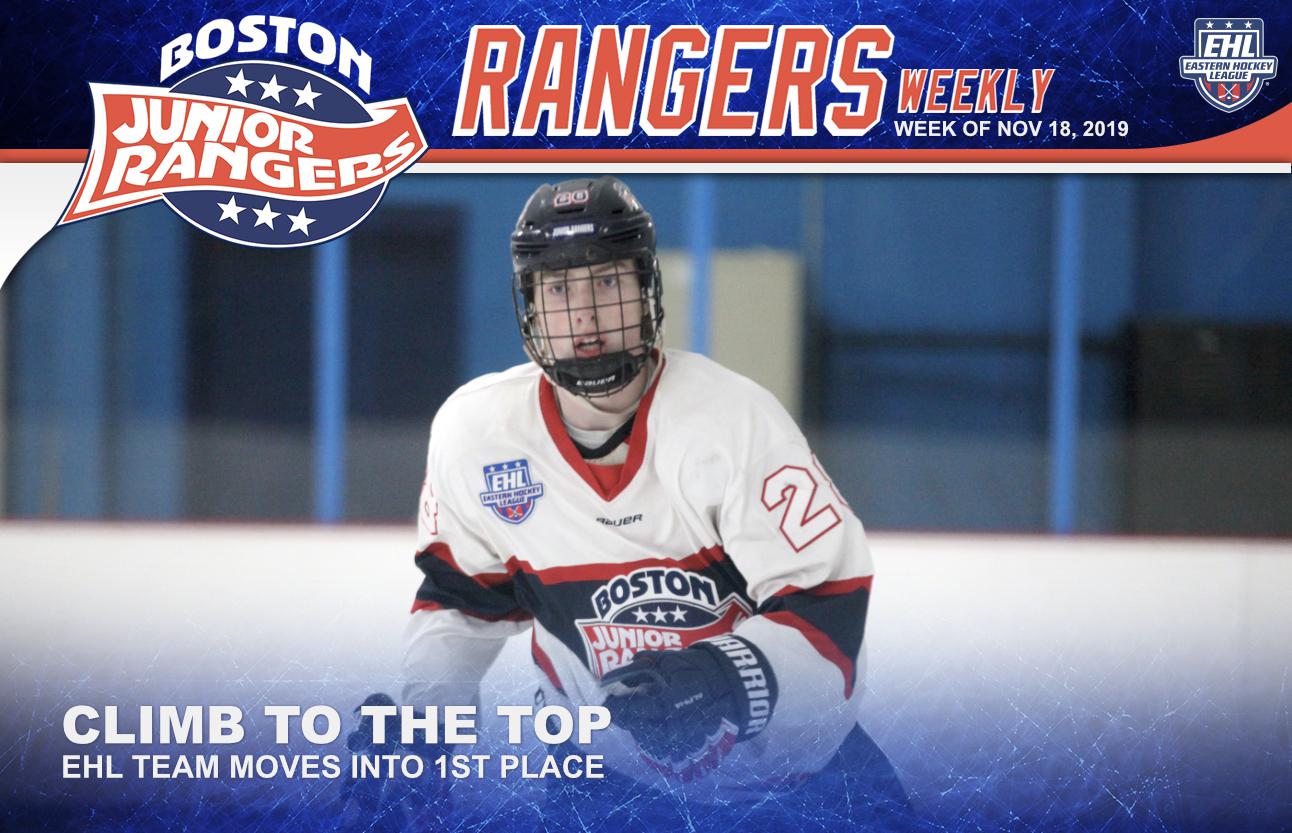