TEWKSBURY, MA -- Both Rangers squads were back in action this past week as the EHL team extended their winning streak to 6 games with a pair of wins and still sit at the top of both the EHL Power Rankings and the New England Conference with an overall record of 19-4-0.

The EHLP team also took care of business this past week by winning both of their games by a combined score of 12-4 and now sit in 3rd place in their conference with a record of 17-4-0.

On Saturday night, the EHL squad traveled to Hooksett for a conference matchup against the New Hampshire Avalanche. Saturday’s game marked the second of four matches between the two teams this season. The Avalanche won the first matchup back in October and got off to a quick start this past weekend, scoring the games first 3 goals. Jake Blackwell got the Rangers on the board near the 7 minute mark of the 2nd period and Nathan Young added a goal near the end of the frame as well, to cut the lead down to 3-2. Just passed the 14 minute mark of the 3rd, Martin Pietraszek evened up the score with a power play goal and his 5th of the season. Connor Doherty gave the boys the lead with just 5:52 on the clock and Brent Rickett added an insurance goal in the final minute to lead the Rangers to a 5-3 comeback win. Billy Girard was terrific between the pipes, stopping 37 shots in the winning effort.

On Sunday afternoon, the Rangers were back in action down in Walpole for a matchup against the Express. Sunday’s game marked the first of four matchups against their conference opponent this season. Andrew Keith put the Rangers on the board first with his 11th goal of the season just over 5 minutes into the contest. The Express scored the game’s next 2 goals however, but Doherty found the back of the net with just 7 seconds remaining in the period to knot the game up at 2 goals apiece. Just over 2 minutes into the 2nd frame, Connor Bizal gave the Rangers the lead followed by a Rickett power play goal later in the period and the Rangers took a 4-2 lead into the final intermission. Rickett added an empty net goal in the final minutes of the 3rd and the Rangers cruised to a 5-2 win. Girard stopped 33 total shots for his league leading 14th win of the season.

On Saturday night, the EHLP squad faced-off against the Connecticut Chiefs for the 3rd time this season. The Rangers won the previous 2 matchups by a combined score of 17-2 and Satruday’s game followed a similar path. Both Stephen Johnson and Derek D’Arcy found the back of the net in the 1st period and Chance Settles scored just 49 seconds into the 2nd frame to give the boys a 3-0 advantage. The Rangers added 3 more goals in the period and took a commanding 6-0 lead. Ryan Bailey, Jackson Drysdale, and Johnson had the tallies. Joey Jamison held off the Chiefs for the rest of the game for his 1st shutout and win of the season as the Plattsburgh, NY native stopped all 25 shots that he faced.

The Rangers returned to action the very next day in Laconia with a matchup against the New England Wolves. Going into Sunday, the Rangers already played the Wolves twice so far this season, beating them both times in two very close games. The Rangers got off to a quick start this past weekend though as Bailey put the Rangers ahead just over 1 minute into the contest. Both Emils Zelcs and Matt McPherson also added goals in the 1st period and the Premier team didn't look back from there. Zelcs scored another in the 2nd frame and McPherson, Brad Mackin, and Javen Heidergott all found the back of the net in the 3rd as the Rangers cruised to a 7-2 win. Cam Libby stopped 17 shots and now holds a perfect 5-0-0 record on the year.

Both Rangers squads will enjoy a well-earned week off for the Thanksgiving Holiday. The EHL squad will get back to work next weekend with a home-and-home series against the East Coast Wizards that starts in Bedford on Friday, December 6th at noon. Next Saturday’s game will be played at Breakaway Ice Center at 7:45pm.

On the other end, the EHLP team won’t play again until December 7th at 4:30pm against the Railers Jr. Hockey Club at Breakaway Ice Center. 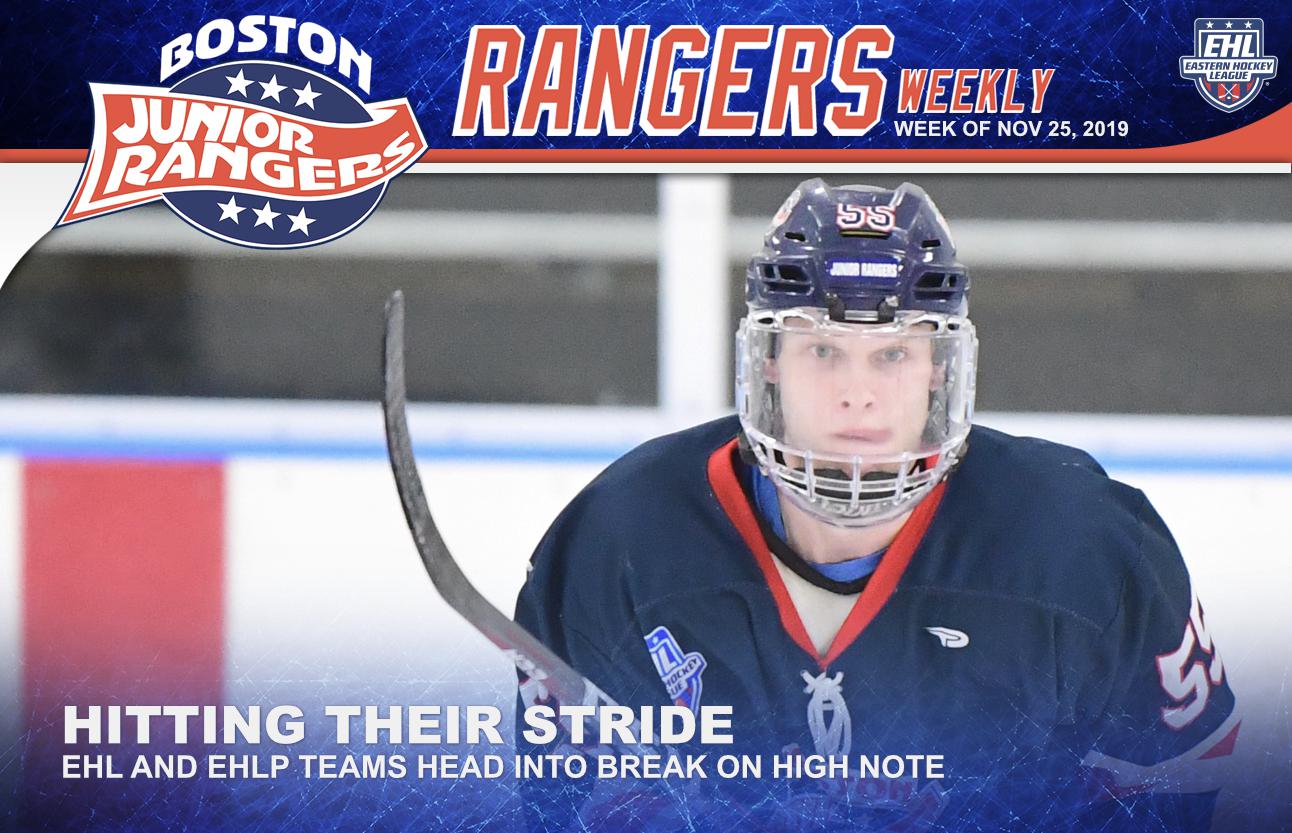