TEWKSBURY, MA -- The Boston Jr. Rangers organization continues to roll as the EHL team extended their winning streak out to 12 games with four wins over the past week. After the wins, the Rangers still have the most points in both the New England Conference and the entire EHL with an overall record of 25-4-0 for the year.

On the other end, the EHLP squad went 1-1-0 over the weekend and currently sit in 3rd place in their conference with an overall record of 19-5-0. They trail the Railers Jr. Hockey Club for 2nd place by just one point.

On Wednesday, The EHL squad traveled down to the Newington, CT for the 4th league-wide showcase of season and faced-off against the Seahawks Hockey Club on the first day. Coming into the matchup, both teams have already beaten each other once this season and the Seahawks were not far behind in the New England Conference standings. Connor Bizal put the Rangers on the board just over 2 minutes into the contest and Nathan Young followed with another goal not long after to give the boys an early 2-0 lead. After the Seahawks responded with a goal later in the frame, both Martin Pietraszek and Bizal answered with goals just 1:02 apart to give the Rangers a 4-1 advantage. The Seahawks got a goal back at the end of the half, but Tommy Carr made it a 3 goal game again with a goal on the other side of the half. However, the Seahawks responded with 3 answered goals to tie the game but Nick Weaver scored the game winning goal for the Rangers late to lead them to a 6-5 win. Billy Girard stopped 31 shots in the winning effort.

On Thursday and day #2 of the showcase, the Rangers squared-off against the Philadelphia Revolution for the first and only time this season. Christian Snyder put the Rangers ahead first on the power play just after 9 minutes into the game. Just a few minutes after, the Rangers leading scorer, Brent Rickett, notched his 40th point of the year and 21st goal of the season and made it a 2-0 game. The Revolution got a goal back in the 2nd half but that is all that they would get as the Rangers held on for the 2-1 win. Girard stopped 21 out of 22 shots in net.

On Saturday night, the Rangers returned back home for a matchup against the Walpole Express. Saturday’s game marked the second of four matchups between the two divisional rivals this season with the Rangers winning the first battle by a score of 5-2 back in November. The Express got the game's first 2 goals this past weekend but Bizal cut the deficit in half near the end of the 1st period on the man advantage. Pietraszek evened things up in the 2nd period and after a scoreless 3rd, the game headed into overtime. With just 33 seconds left in the extra time, Jake Blackwell scored off a breakaway and gave the Rangers the 3-2 win. Girard was busy between the pipes, stopping total of 41 shots in the victory.

The EHL squad wrapped up their busy week on Sunday afternoon with a matchup against the New Hampshire Avalanche. Going into Sunday, the Rangers held a 1-1-0 record against the Avalanche and won the last game back a score of 5-3 last month. Both goaltenders stood on their head in net, each not allowing a goal through the first 3 periods and the overtime. Connor Doherty scored the only goal of the shootout in sudden death and the Rangers came away with the extra point. Girard stopped all 31 shots that he faced for his 3rd shutout and league leading 20th win of the season.

On Saturday night, the EHLP team traveled up to Laconia to wrap up their season series against the New England Wolves. Going into last weekend’s game, the Rangers held a 3-0-0 record against their divisional opponent so far this season and won the last matchup by a score of 7-2 back at the end of November. The Wolves got on the board first but Nick Snyder answered just a couple minutes later to knot up the game at 1-1. The Wolves responded back with a goal late in the 1st, followed by another early in the 2nd frame to take a 3-1 lead. The Rangers came right back though, with 4 unanswered goals in just over 3 minutes not long after to take a 5-3 advantage. Jackson Drysdale (2), Javen Heidergott, and Johnny Malandruccolo had the goals. However, the Wolves responded with 5 unanswered goals later in the period and took a 8-5 lead. The high scoring offense continued in the 3rd as Malandruccolo scored on the power play just 22 seconds into the frame. The Wolves responded just 16 seconds later though, but Heidergott cut the deficit down to 9-7, 46 seconds after that. After the Wolves extended their lead out to 3, Malandruccolo and Drysdale scored late power play goals but the Rangers came up just short by a final score of 10-9.

The Rangers got back to work the very next day with a matchup in Newington, CT against the Connecticut Chiefs. Sunday’s game marked the 3rd game between the two divisional opponents this season with the Rangers winning all 3 by a combined score of 23-2. Ryan Bailey gave the Rangers an early lead just 4:21 into the game and Heidergott followed up with a power play goal just a few minutes later to give the boys a 2-0 lead. However, the Chiefs answered back with a pair of goals in the 2nd frame to knot up the game a 2 goals apiece. Stephen Johnson gave the Rangers back the lead on the man advantage around the halfway point of the period but the Chiefs responded again with a goal in the 3rd to force overtime. After a scoreless overtime, the Rangers took the extra point by winning the shootout. Matt Morrison stopped 32 shots for his 4th win of the season.

Both Rangers squads will enjoy some well deserved time off for the holidays ahead as the EHL team won’t play again until the January league-wide showcase in Exeter, NH starting on January 12th.

The EHLP team is off until the weekend of January 11th, where they are scheduled to play an important two-game series against the 1st-place New Hampshire Avalanche. 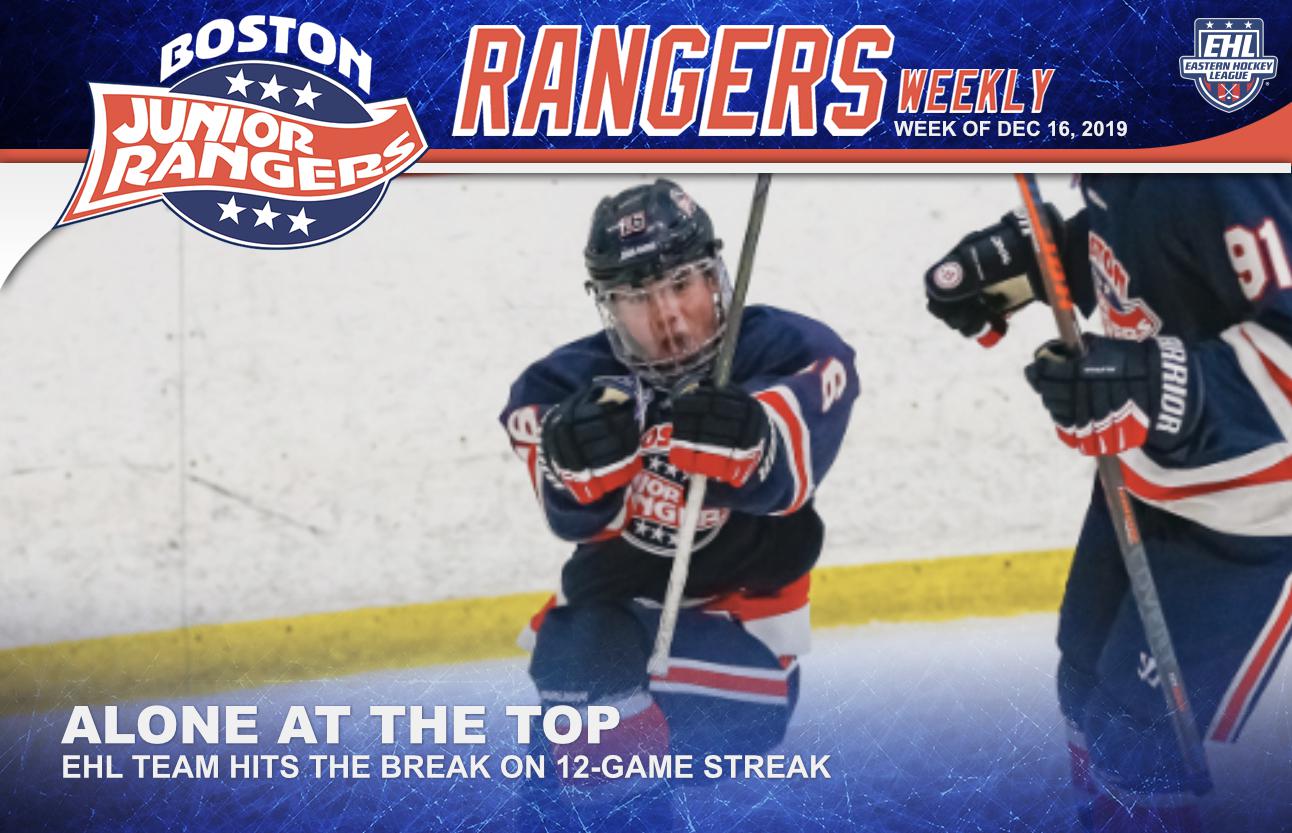