TEWKSBURY, MA -- Both Rangers EHL and EHLP squads were back in action this past week after the long holiday break. The EHL team swept the 5th and final league-wide showcase of the season, and extended their winning streak out to an impressive 14 games. They currently still remain at the top of the New England Conference with an overall record of 27-4-0.

On the other end, the Rangers EHLP team posted a 1-0-1 record over last weekend and still sit in 4th place in their conference with a mark of 20-5-1.

On Sunday, the EHL squad traveled to Exeter, NH for the 5th and final league-wide showcase of the season. On Sunday, the Rangers matched-up against the Connecticut Chiefs for the first of three games against their conference opponent this season. Andrew Keith found the back of the net first, around the 12-minute mark of the frame. In the winding minutes of the half, Jake Blackwell gave the Rangers a 2-0 advantage. Martin Pietraszek then gave the boys some more insurance in the 2nd half, with his 8th goal of the season. Billy Girard was able to hold off the Chiefs for the rest of the game to earn his 4th shutout of the campaign by stopping all 19 shots.

On the second day of the showcase, the Rangers squared-off against Team Maryland for their first and only time this season. Blackwell scored his 11th goal of the year just under three minutes into the contest, to give Boston the early lead. The recent Elmira College commit, Mitchell Haight, gave the Rangers a two-goal advantage near the end of the half. However, Maryland scored in the very last second of the 1st half and again early in the 2nd frame, to knot the game up at 2-2. The Rangers leading scorer, Brent Rickett, gave the boys back the lead with his 41st point of the year. But Maryland responded again though, scoring two quick goals and took a 4-3 lead with around 10 minutes left. Just a couple minutes later, around the eight-minute mark, Joey Schaefer tied things up at 4-4 and then in the final minute, Nathan Young scored the game-winning goal. Girard turned away 26 shots for his league-leading 22nd win of the year. After the wins the Rangers finished with an impressive 9-1-0 showcase record for the season.

On Saturday, the EHLP squad welcomed the 1st-place New Hampshire Avalanche to town for a pair of games over the weekend. Going into the weekend, the Rangers had already lost to the Avalanche twice this season, but had a different attitude coming out of the break. After a scoreless 1st period, the Avalanche scored twice in the 2nd frame to take a 2-0 lead. However, Nick Snyder cut the lead in half with 4:29 left on the clock for his 11th tally of the year. Just a couple minutes later, Ryan Bailey took the puck end-to-end and finished to tie the game up and send it to overtime. After a scoreless overtime period, the Rangers unfortunately fell in the shootout, but outshout the Avalanche by 20 total shots. Logan Palmer stood tall in net, stopping 27 shots in the shootout loss.

After a scoreless first period on Sunday, Matt McPherson, found the back and gave the Rangers a 1-0 lead. Just a couple minutes later, the EHLP’s leading scorer, Johnny Malandruccolo, lit the lamp on the power-play and gave Boston a 2-0 advantage. Matt Noe gave the Rangers some insurance with a goal in the 3rd period, and both Malandruccolo and Bailey Doust added empty netters to put the game out of reach, as the Rangers won decisively by a final score of 5-0. Logan Palmer stopped all 37 shots that he faced for his 4th shutout and 10th win of the season.

Both squads will get back to work this week as the EHL squad just has one game on Friday in Worcester at 11:30am, against the Railers Jr. Hockey Club.

On the other hand, the EHLP squad will travel down to Worcester for three games at the 3rd and final league-wide showcase of the season. The Rangers are set to face-off against the Railers Jr. Hockey Club on Saturday at 9:00am, followed by a pair of games on Sunday against the Vermont Lumberjacks and the New Jersey Renegades at 8:00am and 5:10pm respectively. 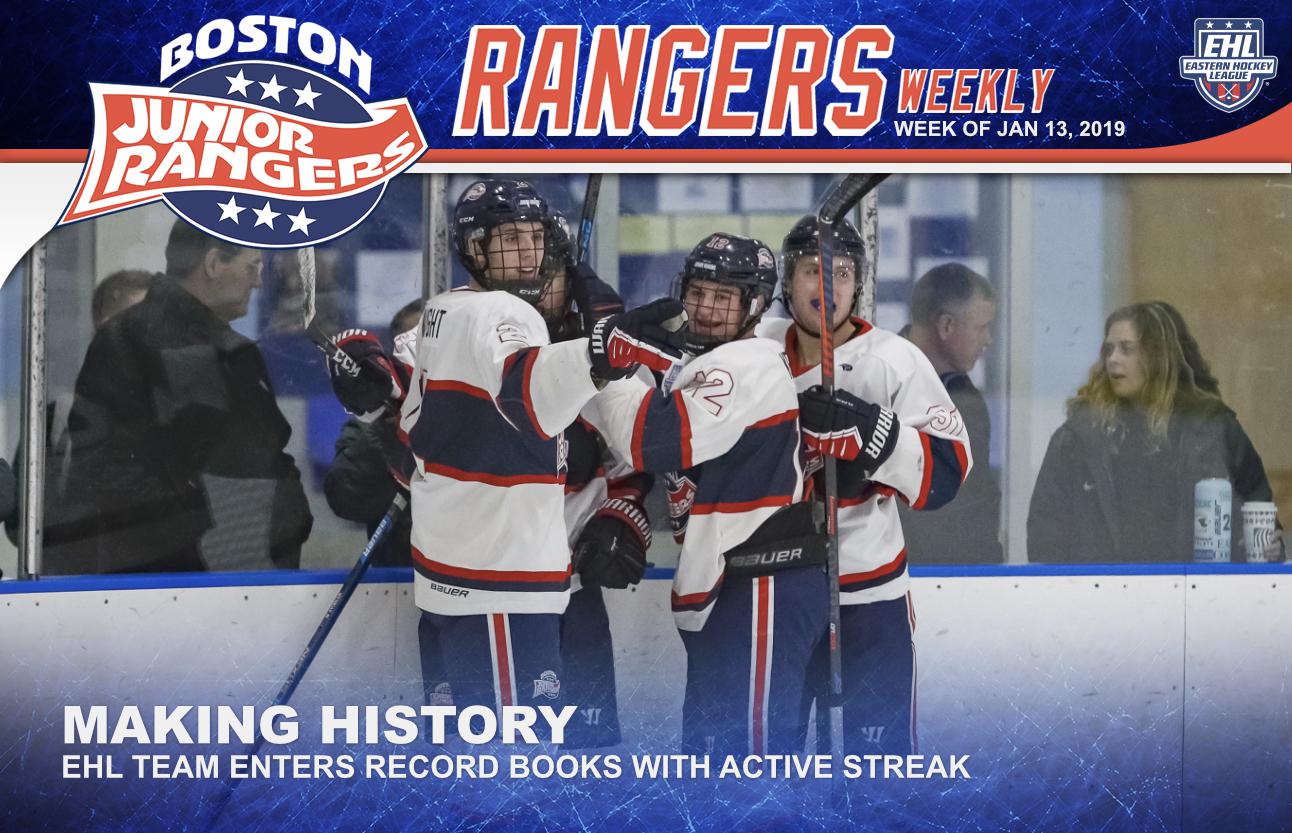