TEWKSBURY, MA -- Both Rangers’ squads were back in action this past week. The EHL team extended their winning streak out to 15 games with a win last Friday, and still sit in 1st place in the New England Conference with the best record in the EHL at 28-4-0.

On the other end, the EHLP team won all three of their games at the 3rd and final league-wide showcase of the season. They currently sit in 3rd place in their conference with a record of 23-5-1.

This past Friday, the EHL squad traveled to Worcester and squared-off against the Railers Jr. Hockey Club for a 3rd time this season. The Rangers won the previous two matchups by a combined score of 22-9.

Connor Bizal put the Rangers on the board first with a short-handed goal near the end of the 1st period. Just under two minutes into the 2nd frame, Brent Rickett, gave Boston a two-goal lead on the man advantage. Both Nick Weaver and Joey Schaefer scored just 55 seconds apart not long after that to put the Rangers ahead 4-0. Jake Blackwell potted his 12th goal of the year near the end of the frame to give the boys a commanding 5-0 lead into the final period. Schaefer added some insurance in the 3rd for his 10th goal of the season, and the Rangers cruised to a 6-1 win. Karlis Reinis Riba turned away 18 shots for his 4th win of the season.

Last Saturday and Sunday, the EHLP team took part in the 3rd and final league-wide showcase of the season in Worcester and faced-off against the Railers in the first contest. Going into the matchup, the Rangers held a 3-1-0 record against their conference opponent and trailed them by two points in the standings. The Railers scored the game’s first goal, but Kyle Sintiris scored his first goal as a Ranger and tied the game up at 1-1. Ryan Bailey gave Boston the lead just over a minute later and Nick Snyder added some late insurance on the power-play to lead the Rangers to a 3-1 win. Cam Libby was solid between the pipes, stopping 21 shots in the win.

On the second day of the showcase, the Rangers matched up against the Vermont Lumberjacks for the first of five games this season between the two teams. The league’s leading scorer, Johnny Malandruccolo, gave the Rangers the early lead and they didn't look back from there, scoring four more times in the half to take a commanding 5-0 lead. Tyler Wilson, Stephen Johnson, Malandruccolo, and Jackson Drysdale had the other goals. Wilson completed the hat-trick in the 2nd half with a pair of power-play goals from Bailey and Johnson and the Rangers cruised to a 9-1 win. Libby turned away 12 shots in net for his 7th win of the year.

Later on Sunday, the Rangers faced-off against the New Jersey Renegades for the first and only time this season. Both Wilson and Sintiris scored just 11 seconds apart in the opening minutes of the game and gave the Rangers a quick 2-0 lead. Chance Settles added another goal just 52 seconds later, which extended the lead out to 3. Snyder, Malandruccolo (2), and Bailey added 2nd half goals and the Rangers finished the season with a 7-1-0 showcase record. Matt Morrison stopped all 10 shots that he faced for his 5th win and 2nd shutout of the season.

Both the EHL and EHLP squads will get back to work this week with a busy slate of games ahead. The EHL team will face-off against the Walpole Express at Stoneham Arena on Wednesday at 12:00pm, before hosting the 2nd-place Vermont Lumberjacks on both Friday and Saturday at Breakaway Ice Center. Friday’s game is scheduled for 4:30pm, while Saturday’s will be played at 2:55pm.

On the other end, the EHLP squad will also host the Lumberjacks on both Friday and Saturday at 7:40pm and 11:45am respectively. The Rangers will then wrap-up the week with a game at home against the Valley Jr. Warriors on Sunday at 2:00pm. 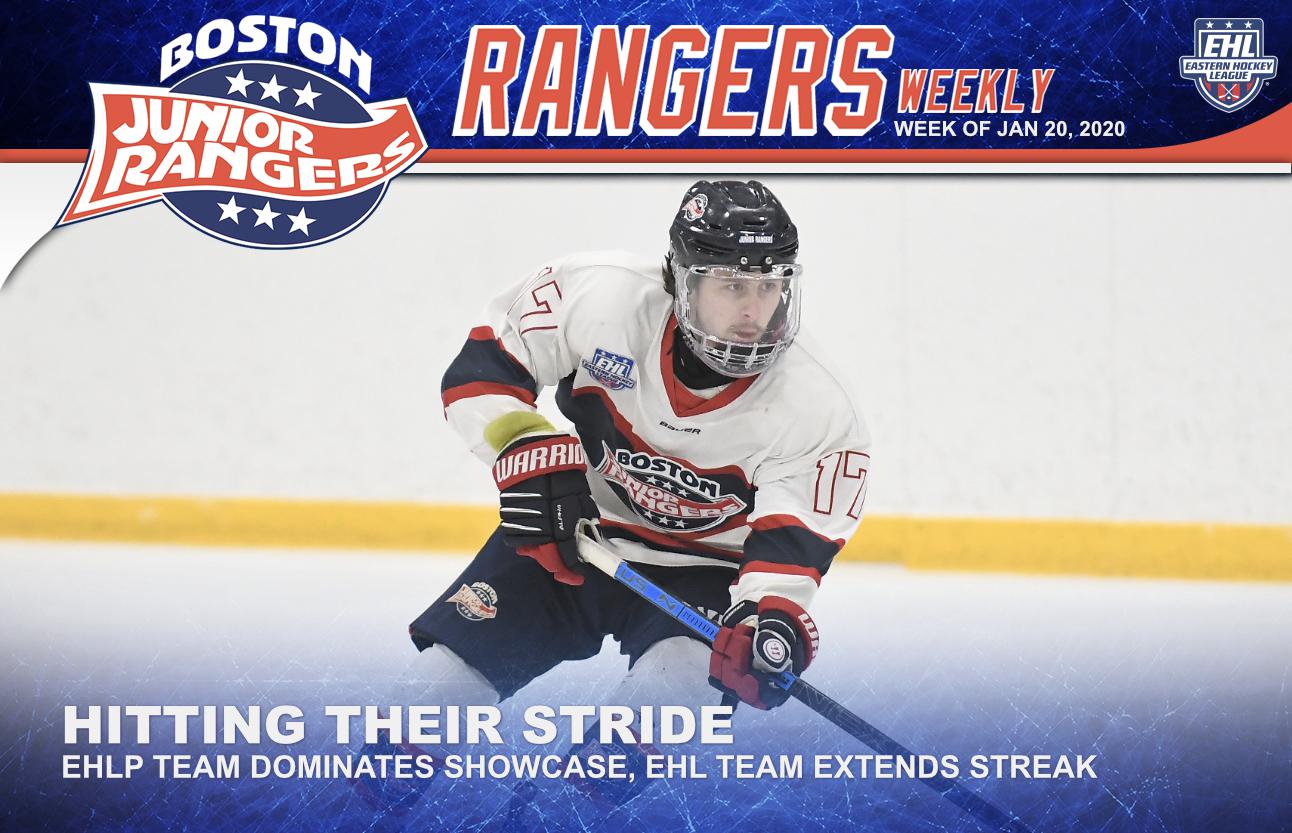