TEWKSBURY, MA -- The EHL and EHLP Rangers’ squads were back in action this past week. The EHL team saw their lengthy winning streak come to an end, and split their weekend series with the 2nd place Vermont Lumberjacks, but currently remain in 1st place in both the EHL and the New England Conference with a record of 29-5-1.

On the other end, the EHLP squad won all three of their games this past weekend, and extended their winning streak out to seven games. With the wins, the Rangers moved into 1st place in both their conference and the entire EHLP with a record of 26-5-1.

Last Wednesday, the EHL squad faced-off against the Walpole Express for the 3rd time this season. The Rangers won the previous two matchups and are scheduled to play the Express one more time on the very last game of the season. The Express struck first just over a minute into the game but Connor Bizal responded later in the frame to knot up the game at 1-1. After Walpole took the lead again in the 2nd period, Connor Doherty found the back of the net to tie the game again at 2-2. However, the Express took back the lead just 34 seconds later in the final minute of the period. With just 5:03 left remaining in the game, Bizal notched his 19 goal of the year and forced overtime. The Rangers unfortunately failed to get 2 points for the first time since November 11th as they fell to the Express in overtime. Billy Girard stopped 35 shots between the pipes in the overtime loss.

This past Friday, the 2nd place Vermont Lumberjacks came into town for the first and second of four matchups between the two divisional rivals this season. With the best record in the EHL on the line, Martin Pietraszek scored just 18 seconds into the game and gave the Rangers the early lead. The Lumberjacks answered with a goal around the 12 minute mark of the 2nd period but Boston rallied off 3 unanswered goals later in the frame to take a 4-1 advantage. Connor Galloway had two of the goals while Doherty had the other. Vermont scored twice in the 3rd but were unable to finish off the comeback and the Rangers won by a final score of 4-3. Girard stopped 41 shots in the winning effort.

The very next afternoon, the same two teams squared-off again and this time the Lumberjacks took the early lead but Brent Rickett responded later in the period and evened up the score. Vermont got another goal in the very last second of the frame, but Nathan Young answered for the Rangers just 32 seconds into the 2nd period which knotted up the game up at 2 goals apiece. The back and forth action ensued as Connor Doherty made it a 3-3 game near the 15 minute mark after the Lumberjacks took the lead again. However, Vermont scored 3 unanswered goals and despite a power play goal from Rickett in the 3rd, the Rangers fell by a score of 6-4. Girard turned aside 34 shots in the loss.

Last Friday, the EHLP squad also faced-off against the Vermont Lumberjacks for the second and third times this season. The Rangers won the first matchup by a final score of 9-1 at the Worcester showcase just a couple weeks prior. The Lumberjacks scored the games first goal, but Ryan Bailey put the Rangers on the board just 36 seconds into the 2nd period. Tyler Wilson put Boston ahead 2-0 around 7 minutes later and the boys never looked back from there. Nick Snyder, Johnny Malandruccolo, and Bailey scored insurance goals in the 3rd and the Rangers cruised to a 5-1 win. Bobby McCloskey stopped 28 out of 29 possible shots in his return for his first win of the season.

The very next afternoon, the same two teams went at it again and Vermont took the early lead again, this time on the power play. Both Bailey and Quinn Shepard responded later in the frame however, to give the Rangers a 2-1 lead into the intermission. Vermont evened things up early in the 2nd period, but Bailey answered for the Rangers yet again just under 2 minutes later. The EHLP’s leading scorer, Malandruccolo, notched a goal on the man advantage just a couple minutes after to give the Rangers a 4-2 lead. The Lumberjacks battled back though, with a pair of goals in the span of 4 minutes to knot up the game at 4-4. Both Jackson Drysdale and Derek D’Arcy got their names on the scoresheet with goals near the end of the period and made it a 6-4 game. However, Vermont came from behind yet again with two more goals near the halfway point of the 3rd period which made it 6-6. In the final minute of the high scoring affair, Matt McPherson scored the game-winning goal on a breakaway, followed by an empty net goal from Brad Mackin and the Rangers won by a final score of 8-6. Cam Libby was busy in net, stopping 35 shots and remains perfect on the year with an 8-0-0 record.

This past Sunday afternoon, the Rangers hosted the Valley Jr. Warriors to wrap up the busy weekend. Sunday’s game marked the 3rd time these two divisional opponents have played this season and have 3 more games against each other remaining. The Warriors took an early 2-0 advantage but Reid Perry got the Rangers on the board just 25 seconds after their 2nd goal. Both Drysdale and Snyder added goals near the end of the frame and the Rangers took a 3-2 into the first intermission. Kyle Sintiris earned his 10th point for the Rangers just under 4 minutes into the 2nd period and the boys didn't look back from there with 3 more goals in the period. Wilson, Daniels Docenko-Svirido, and Bailey had the 2nd period tallies. The goals just kept coming in the 3rd, as the Rangers added 6 more to their total and won the game by a final score of 13-2. Decenko-Svirido, Zelcs (2), McPherson, Bailey, and Deel had the 3rd period goals. Matt Morrison stopped 28 shots in the winning effort and also remains perfect on the season with a 6-0-0 record.

Both Rangers’ squads are back in action this upcoming week as the EHL team is set to face-off against the Connecticut Chiefs at Stoneham Arena on Wednesday at 12:00pm, and are then set to match-up against the Valley Jr. Warriors on the road on Saturday night at 4:40pm.

On the other hand, the EHLP squad will square-off against the Warriors again on Friday night at 8:20pm in Haverhill. 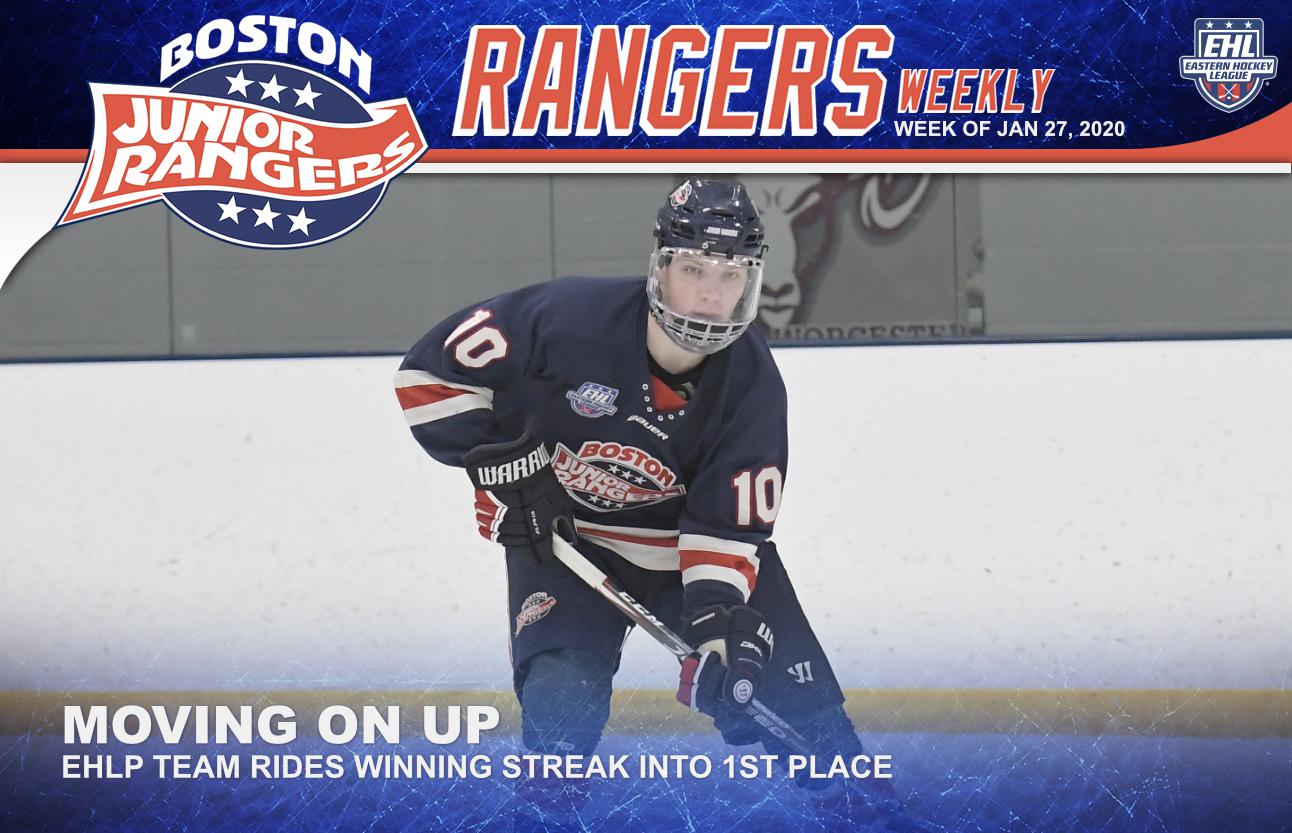