TEWKSBURY, MA -- Both Rangers’ squads were back in action this past week, as the EHL got back in the win column by winning both of their matchups. After the wins, the Rangers still sit at the top of the EHL with a record of 31-5-1.

On the other end, the EHLP team won their only game of the weekend, and currently sits in 2nd place in their conference with an overall record of 27-5-1.

Last Wednesday afternoon, the EHL team squared-off against the Connecticut Chiefs for the 2nd time this season. The Rangers won the previous matchup by a score of 3-0 earlier in January, and still have one game remaining against their conference opponent near the end of the regular season. Joey Schaefer put Boston on the board first with a goal just past the 14-minute mark of the 1st period. Just 46 seconds later, Connor Bizal gave the Rangers a two-goal advantage with his 20th goal of the season. Connor Doherty converted on the power-play near the end of the frame, but the Chiefs answered back with a pair of quick goals in the 2nd frame to make it a 3-2 game. The Rangers' captain, Mitchell Haight, gave the team some insurance with a goal near the halfway point of the 2nd period, and despite a late power-play goal from the Chiefs, the Rangers held on in the 3rd to win by a final score of 4-3. Ben Greenlee turned away 25 shots for his 2nd win of the season.

This past Saturday, the Rangers capped off their regular season series with the Valley Jr. Warriors. Boston was eyeing the sweep having won the previous three games by a combined score of 11-3. Both Brent Rickett and Haight scored just 15 seconds apart in the 1st period and gave the Rangers an early 2-0 lead. Rickett, who leads the Rangers in scoring this season, completed the hat-trick with two more goals in the 2nd frame for his 27th and 28th tallies of the year, and gave Boston a 4-1 advantage. Jonah Nash and Bizal added insurance goals in the 3rd and the Rangers cruised to a 6-2 win. Karlis Reinis Riba stopped 29 shots between the pipes for his 5th win of the season.

Last Friday, the EHLP squad faced-off against the Valley Jr. Warriors for the 3rd time this season. The Rangers won the first two games by a combined score of 17-5 and Friday’s matchup followed a similar pattern. Nick Snyder found the back of the net just over two minutes into the contest to give the Rangers the early lead. Both Matt McPherson and Johnny Malandruccolo (short-handed) scored near the end of the frame and the Rangers took a 3-1 lead into the 1st intermission. The Warriors responded with a goal early in the 2nd period, but Malandruccolo answered to make it a 4-2 game. Malandruccolo finished off the hat-trick with a tally just 41 seconds into the 3rd period and the flood gates opened up from there. The EHL’s leading scorer found the back of the net two more times in the frame, for a five-goal performance, and now has 49 goals on the year and 83 total points. Max Stephens, McPherson (2), and Ryan Bailey had the other 3rd period goals, as the Rangers won by a final score of 11-3. Joey Jamison turned aside 23 shots for his 2nd win of the season.

Both Rangers’ squad will get back to work this upcoming week as the EHL team will face-off against the Seacoast Spartans at Breakaway Ice Center tomorrow at 12:00pm, before heading to Vermont for a pair of games against the second-place Lumberjacks on Saturday and Sunday. Saturday’s matchup is scheduled for 8:00pm, while Sunday’s game will be played at 12:00pm.

The EHLP team is also set to head up to Vermont this weekend, and will play the Lumberjacks on Saturday at 5:00pm and then again on Sunday at 9:00am. 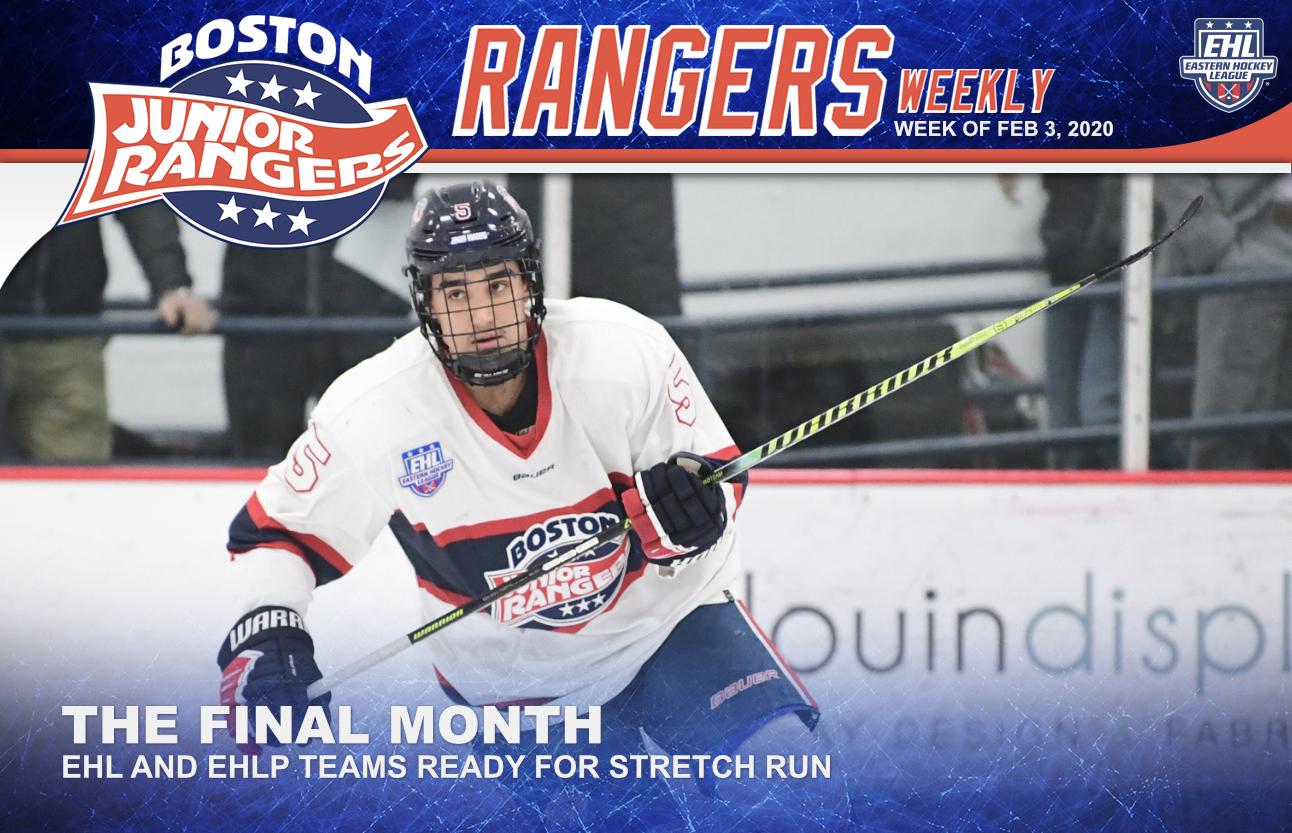