EHL and EHLP Teams Looking to Lock Up Top Seeds

TEWKSBURY, MA -- Both the EHL and EHLP teams were back in action this past week as the EHL squad posted a 2-0-1 record and still have the most points in the entire EHL, and also remain in 1st place in the New England Conference with a record of 33-5-2. They currently lead the 2nd-place Lumberjacks by five points, with two games in hand.

On the other end, the EHLP squad won both of their games over the weekend and have moved into 1st place in their conference, with an overall record of 29-5-1.

Last Tuesday, the EHL squad squared up against the Seacoast Spartans for the 4th and final time in the regular season. The Rangers won the first three games against their conference opponent this season by a combined score of 16-4. After a scoreless 1st period, Jake Blackwell scored twice in the 2nd, for his 13th and 14th goals of the year, and gave Boston a 2-0 lead. Andrew Keith found the back of the net in the 3rd period on the power play, and Connor Bizal added an empty-net goal, as the Rangers cruised to a 4-0 win. The recent University of New England commit, Billy Girard, stopped all 29 shots that he faced for his league-leading 5th shutout of the season.

This past Saturday, the EHL team headed up to Vermont for the first of two matchups against their rival over the weekend. Last weekend’s games wrapped-up the regular season series between the two top EHL teams, with both teams splitting the first two games at the end of last month. Both Martin Pietraszek and Connor Doherty scored just 26 seconds apart in the 1st period, which gave the Rangers an early 2-0 lead. Vermont responded with a goal of their own near the end of the frame, but Doherty and Joey Schaefer both scored in the first two minutes of the 2nd period, and gave Boston a 4-1 advantage. The Lumberjacks answered with a pair of goals later in the frame, but Bizal notched his 23rd goal of the year, which gave the boys a 5-3 lead going into the final intermission. However, Vermont scored twice in the 3rd, and took the extra point by winning the shootout. Girard was busy in net, stopping 42 shots in the shootout loss.

On Sunday, the same two teams went at it again and the Rangers took an early two-goal lead again with goals from both Keith and Doherty in the 1st. The Lumberjacks battled back in the 2nd, scoring twice and knotted up the game at 2-2. The Rangers leading scorer, Brent Rickett, scored the game winning goal late in the 3rd for his 29th goal and 58th point of the year, and Boston won by a final score of 3-2. Girard turned away 31 shots for his league-leading 25th win of the season.

The Premier squad also faced-off against the Lumberjacks for a pair of games over the weekend, which wrapped-up their regular season series against the conference opponent. Going into the weekend, the Rangers held a 3-0-0 record against Vermont, winning all three games by a combined score of 22-8. Max Stephens got the Rangers on the board first on the man advantage just over seven minutes into the contest. The Lumberjacks answered with a pair of goals in the 2nd period, but Matt Noe evened things up near the end of the period for his 3rd goal of the season. Nick Snyder gave the Rangers the lead with 4:45 left remaining in the game, and Johnny Malandruccolo added a short-handed empty net goal for his league-leading 50th tally of the year in the final minutes to lead the Rangers to a 4-3 win. Bobby McCloskey turned aside 23 shots between the pipes in the victory.

On Sunday, Stephens scored on the power-play in the 1st period for the 2nd straight game, which gave the Rangers the early lead. Stephens added another goal on the man advantage in the 2nd period for his 8th tally of the year, which gave Boston a 2-0 advantage. The power-play units continued to click for the Rangers, as Malandruccolo made it a 3-0 game with the extra man near the end of the frame. The Lumberjacks responded with a with a goal early in the 3rd, but both Jackson Drysdale and Malandruccolo put the game out of reach with tallies later in the frame, and the Rangers won by a final score of 5-1, and swept Vermont in the regular season series.  With the 2 goals, Malandruccolo now has 52 on the season and just trails the all-time EHLP goal record by 5 with 7 games remaining on the schedule. McCloskey collected his 3rd win of the season in net, stopping 21 shots.

Both Rangers’ squads are back in action this upcoming week as the EHL team is set to face-off against the Seahawks Hockey Club in Hyannis tomorrow at 2:00pm. The Rangers are then scheduled to host the Railers Jr. Hockey Club on Saturday at 7:45pm, followed by another home game on Sunday against the New England Wolves at 2:00pm.

On the other end, the EHLP squad will hit the road for a pair of games this upcoming weekend against the Walpole Express. Saturday’s game is set for an 8:00pm puck drop, while Sunday’s matchup is scheduled for 11:00am. 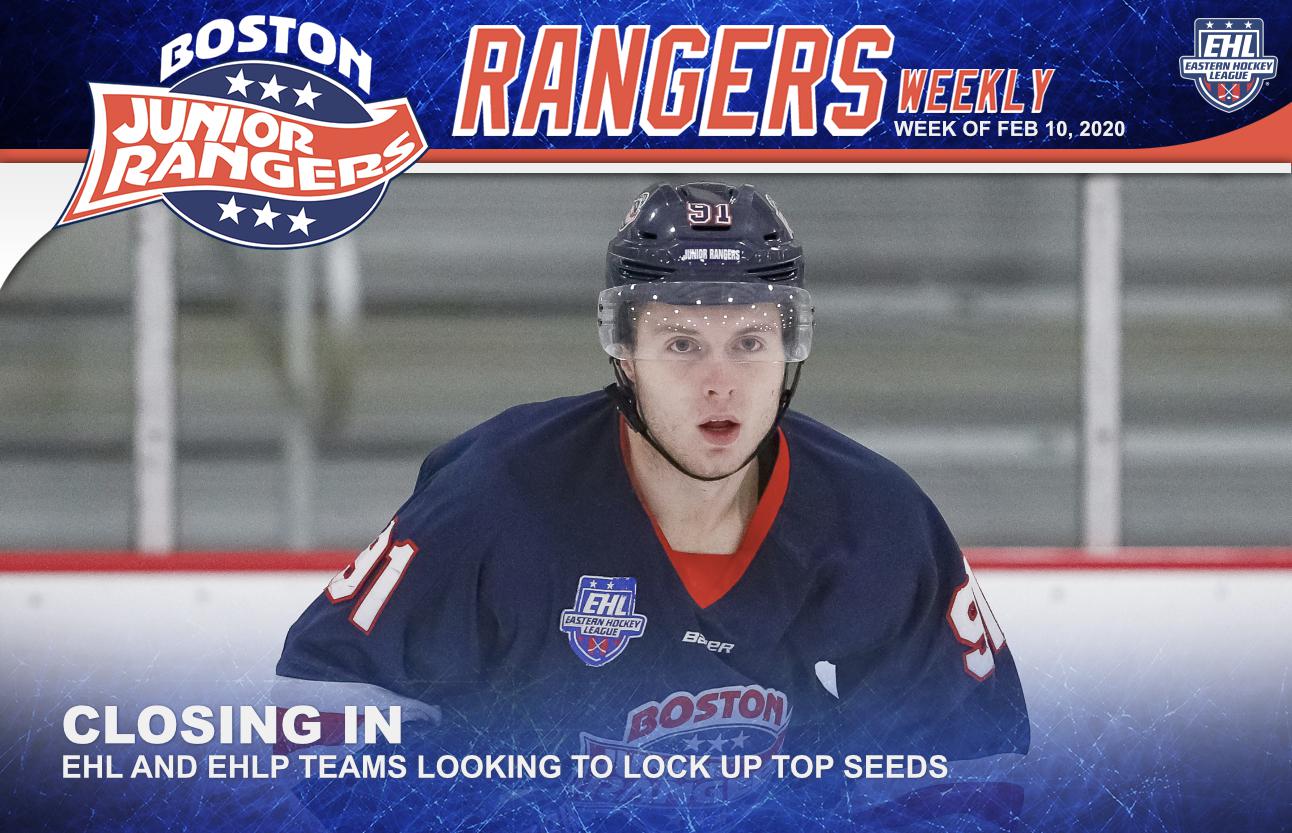