TEWKSBURY, MA -- Both of the Rangers EHL and EHLP squads were in action this past week as the EHL team posted a 3-0-0 record and clinched their first-ever Regular Season Championship, which is given to the EHL team with the best overall record in the regular season. After the wins, the Rangers sit at the top of the league with an overall mark of 36-5-2, with just three games remaining.

On the other end, the EHLP team posted a 1-0-1 record last weekend, and also currently sit at the top of their conference with a mark of 30-5-2, with five games remaining. Just like the EHL team, the Premier squad currently also sits at the top of the league standings with 62 total points.

On Wednesday afternoon, the Rangers traveled to Hyannis and wrapped-up their regular season series against the Seahawks Hockey Club. Going into Wednesday’s game, Boston held a 2-1-0 record against their conference opponent with the loss coming all the way back in September. After a scoreless 1st period, Joey Schaefer broke the tie with a goal near the end of the 2nd frame, for his 13th tally of the season. Just 41 seconds later, Will Fisher gave the Rangers a 2-0 advantage going into the final intermission. In the opening minutes of the 3rd period, Jack Moore notched his 1st goal as a Ranger on the power-play, which gave the boys a commanding 3-0 lead. The Seahawks added a goal near the end of the frame to break the shutout, but the Rangers won by a final score of 3-1. Billy Girard was solid in net, stopping 33 shots in the win.

On Saturday night, the Rangers hosted the Railers Jr. Hockey club for the final matchup between the two teams this season. The Rangers won the previous three games by a combined score of 28-10, which averages out to 9.33 goals scored per game. The Rangers captain, Mitchell Haight, put Boston on the board first on the man advantage with just 14 seconds left in the 1st period. Connor Doherty scored both a short-handed and power-play goal in the span of just 2:56 seconds early in the 2nd period, which gave the Rangers a 3-0 lead. In the final minute of the period, Andrew Keith added another goal for a 4-0 advantage. Jake Blackwell then notched his 15th goal of the season in the 3rd period, and Doherty finished off his hat-trick with a power-play goal, as the Rangers cruised to a 6-0 win. Karlis Reinis Riba stopped all 20 shots that he faced for his 2nd shutout of the year, and remains perfect on the season with a 6-0-0 record.

On Sunday afternoon, the New England Wolves came into town and wrapped up their regular season series against the Rangers. Boston split the previous two games against the Wolves all the way back in October, but got off to an quick start on Sunday as the Rangers' leading scorer, Brent Rickett, scored his 30th goal of the season just 44 seconds into the contest. Connor Bizal made it a 2-0 game around the 13-minute mark of the frame, and both Rickett and Fisher added two more goals near the end of the period to put Boston ahead 4-0. However, the Wolves rallied back for four unanswered goals of their own in the 2nd period to tie the game up. With just 10 seconds left in the period however, Nate Matthews put the Rangers ahead again with his 2nd goal of the season. Keith then added some insurance in the 3rd period, scoring his 17th goal of the year, and the Rangers won by a final score of 6-4. Girard turned aside 29 shots between the pipes for his EHL record-breaking 27th win of the regular season. The former mark was set by Rangers alum, Nolan Egbert, who currently is playing for the UMass Boston Beacons.

On Saturday night, the EHLP squad traveled to Walpole for the first of two matchups over the weekend against the Express, which capped off their regular season series against the conference opponent. The Rangers won the previous four matchups by a combined score of 23-7. Quinn Shepard opened up the scoring just 1:13 into the game, with his 11th goal of the year. Just a few minutes after, Tyler Wilson made it a 2-0 game with his 7th goal of the season, in just 12 games with the Rangers. The Express cut the deficit in half near the end of the period, but Ryan Bailey answered for the Rangers in the 2nd frame to put the boys back up by two goals. Jackson Drysdale added an empty-net goal in the final minute and Boston cruised to a 4-1 win. Logan Palmer stopped 24 out of 25 possible shots in his first game back from injury, for his 11th win of the year.

The same two teams went at it again the very next day and after a scoreless 1st period, the Express struck first just over three minutes into the 2nd frame. However, Bailey responded just 43 seconds after which tied the game up at 1-1. The Express scored the next goal a few minutes later, but Bailey Doust found the back of the net just passed the eight-minute mark of the period, to knot things up again. The back and forth action continued as Walpole scored again in the 2nd period, but it was quickly answered by Kyle Sintiris, which made it a 3-3 game. After the Express took the lead again in the 3rd, Bailey tied things up on the power-play with his 37th goal of the year and forced overtime. Unfortunately, Walpole took the extra point in the shootout and ended the Rangers' 11-game winning streak. However, the EHLP team still hasn't lost a game in regulation since all the way back on December 14th. Palmer stopped 27 shots in the shootout loss.

Both Rangers’ squads are back in action this upcoming week, as the EHL team will head on the road to square-off against the Connecticut Chiefs on Thursday at 1:40pm, before coming home for a matchup on Sunday afternoon at 2:00pm against the New Hampshire Avalanche. The EHL team will then finish off the regular season on the road, Wednesday the 26th against the Walpole Express.

On the other end, the EHLP team will play an important game tomorrow in Hooksett against the Avalanche at 11:40am, followed by a matchup on the road against the Railers on Saturday night at 7:00pm. The Premier squad is then scheduled to return home to Breakaway Ice Center on Sunday for a game against the Chiefs at 11:00am. 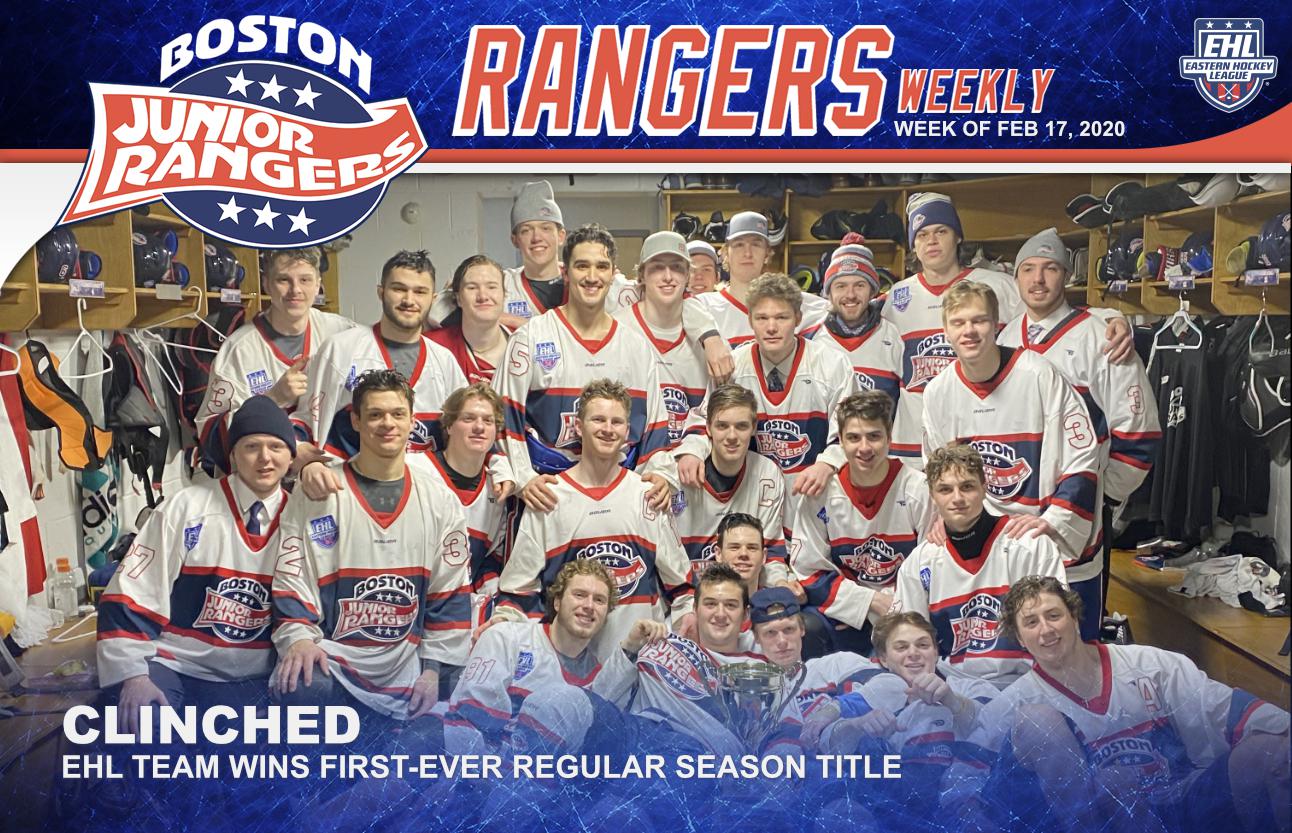