TEWKSBURY, MA -- Both Rangers’ squads were back in action this past week with the regular season coming to an end soon. The EHL squad, who has already clinched the Regular Season Championship, won all three of their games, to finish off the year with a mark of 39-5-2.

The EHLP squad won both of their games, and just like the EHL team, secured the top seed in the New England Conference Playoffs. With two games remaining, the Rangers are inching closer and closer towards a 3rd consecutive EHLP Regular Season Championship.

If they are able to do so this upcoming weekend, the Rangers will became the first organization in league history to win both EHL and EHLP Regular Season titles in the same season.

On Thursday afternoon, the EHL squad traveled down to Newington, CT and wrapped up their season series against the Connecticut Chiefs. The Rangers won the previous two games against their conference opponent by a combined score of 7-3, including a win at the final league-wide showcase of the season. Around the halfway point of the 1st period, the SUNY Fredonia commit, Andrew Keith, gave Boston the early lead. Nate Matthews scored just under two minutes later, and put the Rangers ahead 2-0 with his 3rd goal of the year. With just 29 seconds left in the 2nd period, Jack Moore converted on the power-play and made it a 3-0 game. The flood gates opened up in the 3rd with the Rangers scoring three more times, as they cruised to a 6-0 win. Mitch Haight, Jake Blackwell, and Connor Doherty scored the 3rd period goals, and Karlis Reinis Riba turned aside all 27 shots that he faced for his 8th win, and 3rd shutout of the season.

On Sunday afternoon, the Rangers squared-off against the New Hampshire Avalanche for the final time in the regular season. In the previous three games against their conference opponent, Boston held a 2-1-0 record, with the loss coming all the way back in September. While short-handed, Connor Bizal put the Rangers ahead first just 2:07 into the game. The Avalanche responded near the end of the frame, but John Kuhl scored his 1st goal of the season for the Rangers, also short-handed, and put the Rangers back up 2-1. New Hampshire answered in the 3rd and forced overtime, but the Rangers picked up the extra point in the shootout thanks to a goal from Tommy Carr. Riba was terrific between the pipes, stopping 42 shots for his 9th win of the season, and 2nd of the week. With the wins, Riba collected EHL Goalie of the Week honors.

Wrapping up the regular season, the Rangers traveled down Walpole, MA yesterday afternoon, for a meeting with the Express. The last time these two teams faced off, the Express came away with a 4-3 victory in overtime, snapping the Rangers current 15-game winning streak.

The 1st period of yesterday's contest was loaded with scoring, as Keith opened and closed the frame with a goal at each end. In between Keith's tallies were a trio of Express goals, as they held a 3-2 advantage heading into the middle frame. In the 2nd period, Keith completed the hat-trick, and then the game remained tied until Bizal ended things in overtime for the Rangers. With 31 saves between the pipes, Billy Girard picked up his league-record 28th victory of the season.

On Saturday night, the EHLP squad traveled to Worcester, MA and capped off their regular season series against the Railers Jr. Hockey Club. Going into the matchup, the Rangers held a 4-1-0 record against their conference opponent, and got off to a fast start as Tyler Wilson gave the boys the lead just 52 seconds into the contest. Jackson Drysdale made it a 2-0 game with a goal later in the period for his 16th of the season. The Railers responded in the 2nd frame and cut Boston’s lead in half, but Nick Snyder gave the Rangers the two-goal advantage back with a tally in the final minute of the period. Both Johnny Malandruccolo and Wilson added 3rd period goals, and the Rangers cruised to a 5-1 victory. Logan Palmer was solid in net, stopping 36 total shots.

The very next afternoon, the Rangers retuned home and wrapped up their regular season series against the Connecticut Chiefs. Going into the game, the Rangers held a 4-0-0 record against the Chiefs, winning by a combined score of 27-5. However, Connecticut scored the game’s first goal on Sunday, but their lead didn't last long as Matt McPherson tied things up just 37 seconds into the 2nd period on the man advantage. Max Stephens scored another power-play goal in the period as well and gave the Rangers a 2-1 lead. After Connecticut tied things up again, McPherson gave the Rangers back the lead in the 3rd period, this time just 27 seconds into the frame. Stephens added another power-play goal yet again, which put the Rangers ahead 4-2. On the goal, the EHLP’s leading scorer, Malandruccolo, notched his 100th point of the season by picking up and assist. Malandruccolo then scored near the end of the game as well, which put the contest out of reach, as the Rangers won by a final score of 5-2 and completed the regular season sweep of the Chiefs. Palmer turned aside 24 shots for his 13th win of the season.

With the EHL season officially finished, the focus turns towards the EHLP team, looking to win their 3rd consecutive Regular Season Championship. Coming up this weekend, the team has a home-and-home series with the Valley Jr. Warriors, starting Friday night in Haverhill at 8:20pm. Saturday's game in Tewksbury, is set for a 7:45pm puck drop. 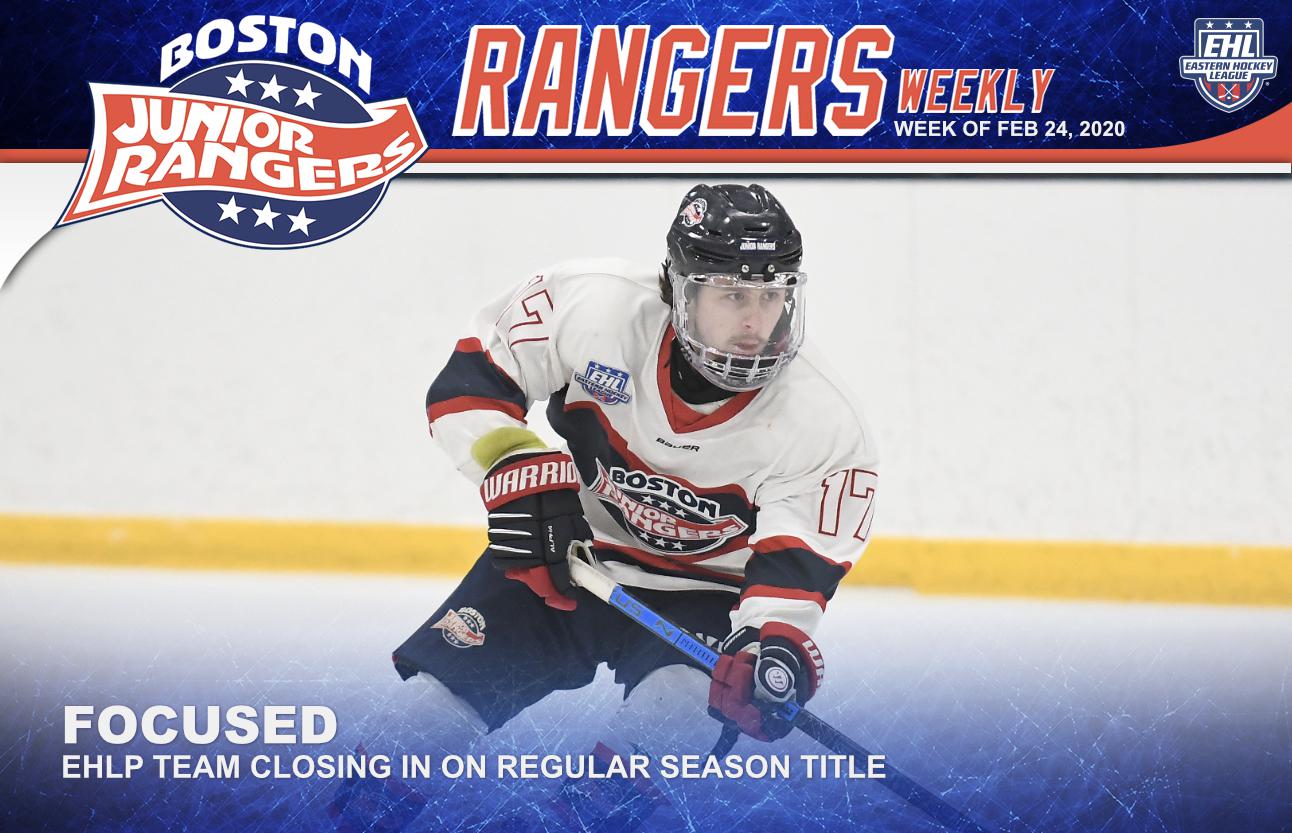