TEWKSBURY, MA -- As the #1 seed, the EHL squad awaits their playoff opponent while enjoying a First Round bye. The EHLP squad wrapped up their regular season by winning a pair of games, and finished the year with a record of 34-6-2. It is worth noting that the Premier squad will also have a First Round bye, as they too have locked up the #1 overall seed in their respective conference.

This past Friday night, the EHLP squad traveled to Haverhill and matched-up against the Valley Jr. Warriors for the first of two games over the weekend against their conference opponent. The Rangers already beat the Warriors in their previous four games by a combined score 37-9 and were aiming for the regular season sweep. Just like the previous games, this past weekend wasn't much different. Boston got off to an early start, scoring five unanswered goals in the 1st period. The recent EHLP forward of the week, Ryan Bailey, opened up the scoring, followed by a pair of goals from Johnny Malandruccolo not long after. Both Carter Deel and Bailey added goals near the end of the frame as well. Malandruccolo added two more goals in the 2nd frame, with the 2nd one having a little more meaning to it, as it broke the all-time goal record for the EHLP with his 58th of the season. Deel, Tyler Wilson, and Chance Settles also scored in the period which increased the lead out to 10-0. The Rangers continued to pour it on in the 3rd period with six more goals from D’Arcy (2), Malandruccolo (for the 5th time), Reid Perry, Jackson Drysdale, and Kyle Sintiris. Logan Palmer stopped 16 shots in the 16-1 win.

The Premier team returned home the very next evening for the final game of the regular season and picked up right where they left off. Just like the previous game Bailey opened up the scoring and the Rangers didn't look back from there. Four more goals were scored in the 1st period from, Sintiris, Drysdale, Nick Snyder and Bailey Doust. The Warriors got on the board in the 2nd frame, but Boston answered back with six straight goals with Quinn Shepard scoring a pair. Malandruccolo, Brad Mackin, Matt McPherson, and Alec Jewett had the other goals in the period. Bailey scored early in the 3rd frame for his 100th point of the season which gave the EHLP squad their 2nd triple-digit point scorer of the year. McPherson and D’Arcy added tallies near the end of the game and the Rangers cruised to a 14-1 win. Palmer turned away 20 shots for his 15th win of the season. It is also worth recognizing both Malandruccolo and Max Stephens for being named the Forward and Defensemen of the Month for February. 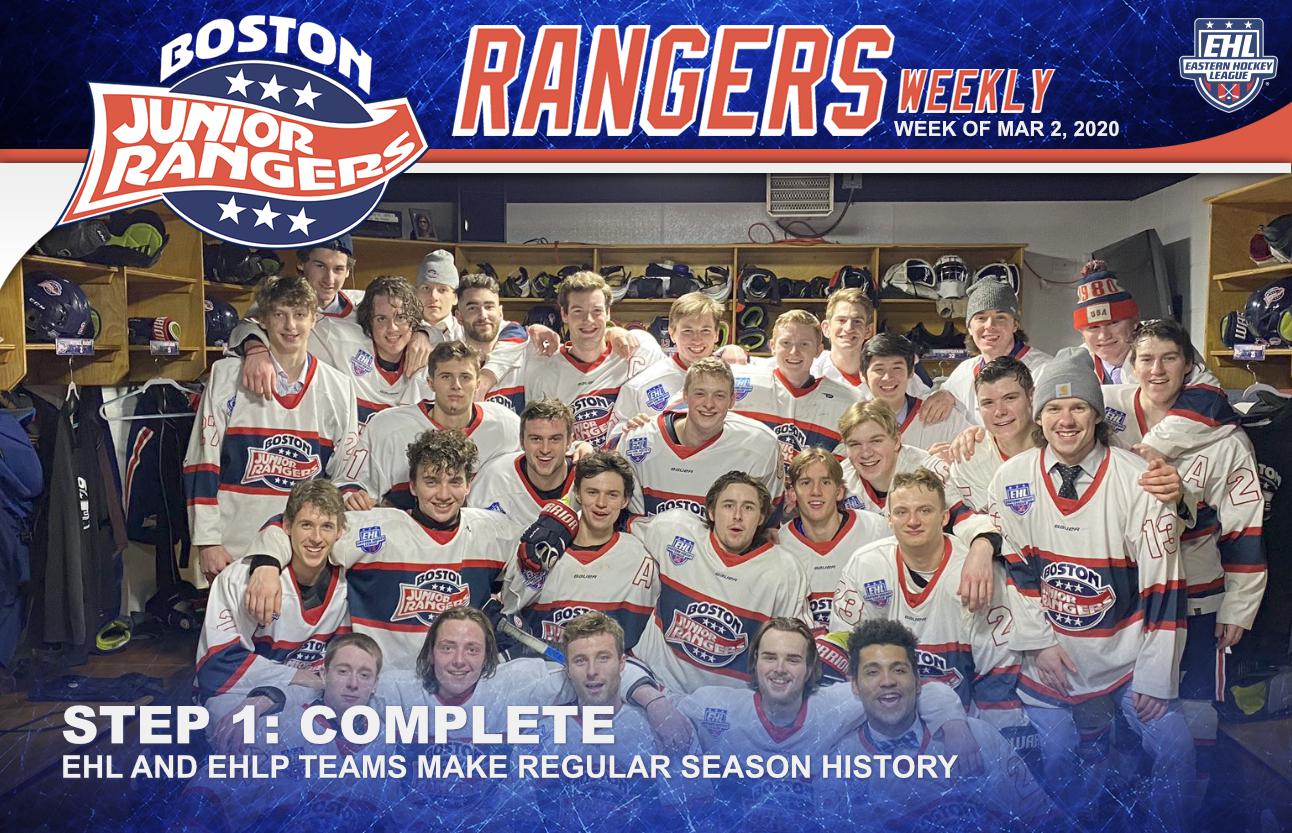