TEWKSBURY, MA -- The Boston Junior Rangers are pleased to announce that Johnny Malandruccolo has committed to SUNY Fredonia for the fall of 2021. The '01 native of Auburn, NY is in his second season with the Rangers organization and first at the Eastern Hockey League (EHL) level.

Malandruccolo began his junior hockey career this past season, tallying 112 points in 40 total games in the Eastern Hockey League Premier (EHLP). The forward was unanimously voted the Most Valuable Player of the EHLP, as he set a new regular season record with 60 goals scored. Malandruccolo also got a taste of the EHL with a goal and an assist in four games last year, which can be combined with nine points in 10 total games to date this year.

"We are very proud of Johnny," said EHL head coach and general manager Rich DeCaprio. "Even though he has a year of eligibility left, he’s ready to play college hockey. He’s a pure sniper and can really fly and create. His trust in the process, work ethic, and love for the game really sets him apart. I'm very excited for him and Coach Meredith at Fredonia."

As DeCaprio mentioned, Malandruccolo is only a 2001 birth year, which would make him eligible to come back in 2021-22 for one final season of junior hockey. The talented scorer is ready now however, and the rest of the 2020-21 season can be focused on fine-tuning his game for the next level.

"I'm very excited to play college hockey at Fredonia," said Malandruccolo. "My last two years with BJR [EHLP and EHL] has been a great experience. My coaches and teammates have done an amazing job to prepare me for my goal of playing college hockey.”

Malandruccolo has missed a little time recently with an injury, but he'll be making his return to the lineup soon, adding even more punch to one of the most potent offenses in the league. 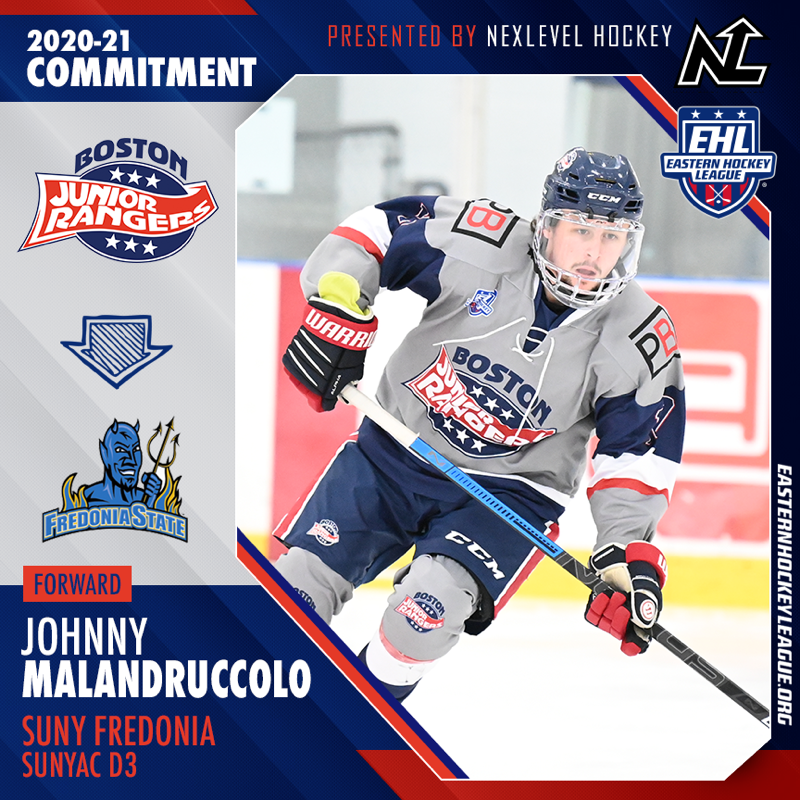