TEWKSBURY, MA -- The Boston Junior Rangers are pleased to announce that Jacob Rodrigue has committed to SUNY Brockport for the fall of 2021. The 2000-born native of Nashua, NH is in his 2nd year with the Rangers, and his first full season with the program. The defensive defenseman has tallied 11 total points in 54 career games in the Eastern Hockey League (EHL).

"We are very proud of Rod," said EHL head coach and general manager Rich DeCaprio. "When he got here last season, we could tell right away that he had the potential to be a really good college hockey defenseman. He’s big, and can really skate and control the puck. He’s matured mentally so much over the last season and a half. He’s basically a 2001 birth year by a couple hours.  His ceiling is very high.  I look forward to watching his college career at Brockport!”

As DeCaprio mentioned, Rodrigue's game has truly developed throughout his time with the Rangers, and clear proof of that can be seen in the EHL All-Star recognition that he received this season. Overall, Rodrigue is the 2nd player in program history to choose Brockport, joining Connor Galloway who made the same decision this past season.

"It has been an honor to be a part of the Jr. Rangers organization and wear the BJR uniform the past 2 years, as well as play in the EHL as a whole," said Rodrigue. "Coach DeCaprio does an excellent job preparing his players both physically and mentally for the rigors of intense competition at the next level. He has a proven track record of moving guys on to great NCAA Division III programs and I’m proud to be a result of that."

Rodrigue went on to talk about his decision to choose SUNY Brockport.

"My commitment to Brockport was an easy decision for myself to make," added Rodrigue. "The SUNYAC is a great conference to play in, as well as a great place to go to school, and I couldn’t be more excited to play under the great coaching staff at Brockport for the next 4 years. My time in the EHL and with BJR has prepared me for an opportunity like this and I’m going to make the most of it.”

Rodrigue and the Rangers sit at the very top of the Central Division standings with a record of 24-2-1. The veteran defenseman will look to help lead his team down the stretch, as they push to clinch that #1 seed and a bye in the First Round of the EHL Playoffs. 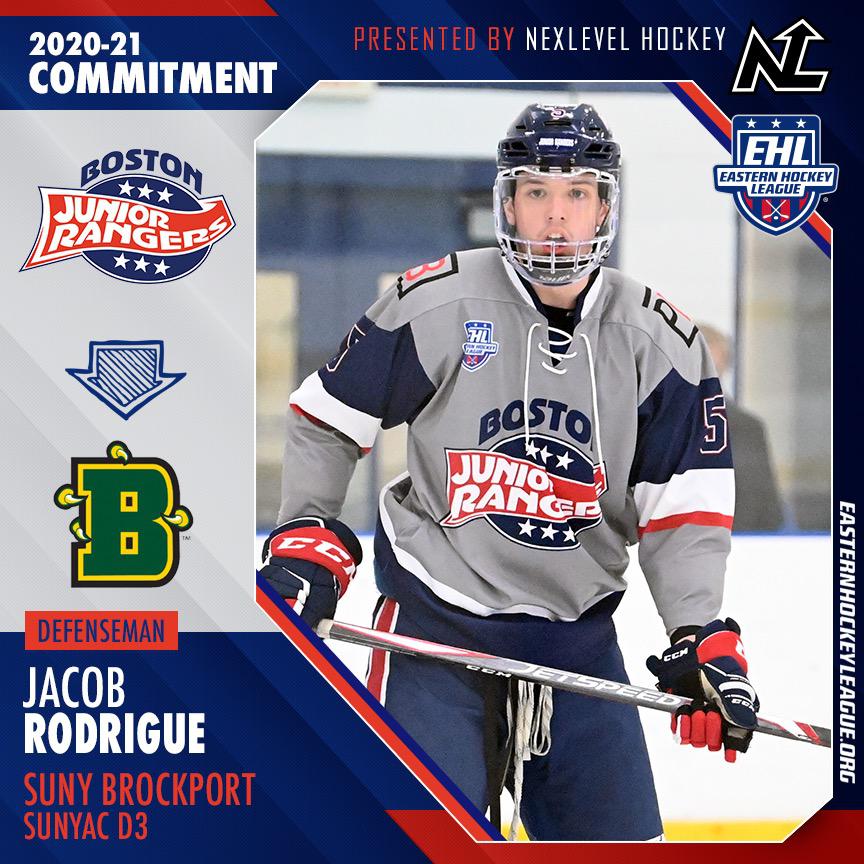