TEWKSBURY, MA -- The Boston Junior Rangers are pleased to announce that Nathan Young has committed to Elmira College for the fall of 2021. The 2000-born native of New Market, MD is in his 3rd season with the Rangers, and in 82 career games in the Eastern Hockey League (EHL), Young has scored 22 goals and collected 53 assists.

"We are so excited for Younger," said EHL head coach and general manager Rich DeCaprio. "He's worked so hard throughout his entire time in the league. Even after his first season of juniors ended much sooner than he would have hoped, he just kept battling. He has worked so hard for this commitment, and I can't wait to watch him excel at the next level."

As DeCaprio mentioned, Young unfortunately saw his first year of junior hockey (2018-19) cut short due to a season-ending injury. At the time of the injury, Young was off to a fast start in the EHL, having tallied seven points in his first eight games. However, despite the setback, Young picked up right where he left off when the 2019-20 campaign began, and he never looked back.

"I am proud to announce my commitment to further my athletic and academic careers at Elmira College," said Young. "Playing for the Boston Junior Rangers over the last three years has been nothing short of amazing. After dealing with a major injury my first year, Coach DeCaprio and Coach Aucoin still believed in me and had patience with me, and I have the upmost gratitude towards them. They developed me into a more complete player on the ice, and more importantly, a better person away from the rink. If you want to pursue your goal of playing college hockey, the Boston Junior Rangers is the place to be!”

With this weight now off of his shoulders, Young can turn his full attention towards leading his team down the stretch run. The Rangers' Captain will be looking to help lead this year's squad back to the EHL Frozen Finals, and finish off what 2019-20 cancellation didn't allow them to do this past March. 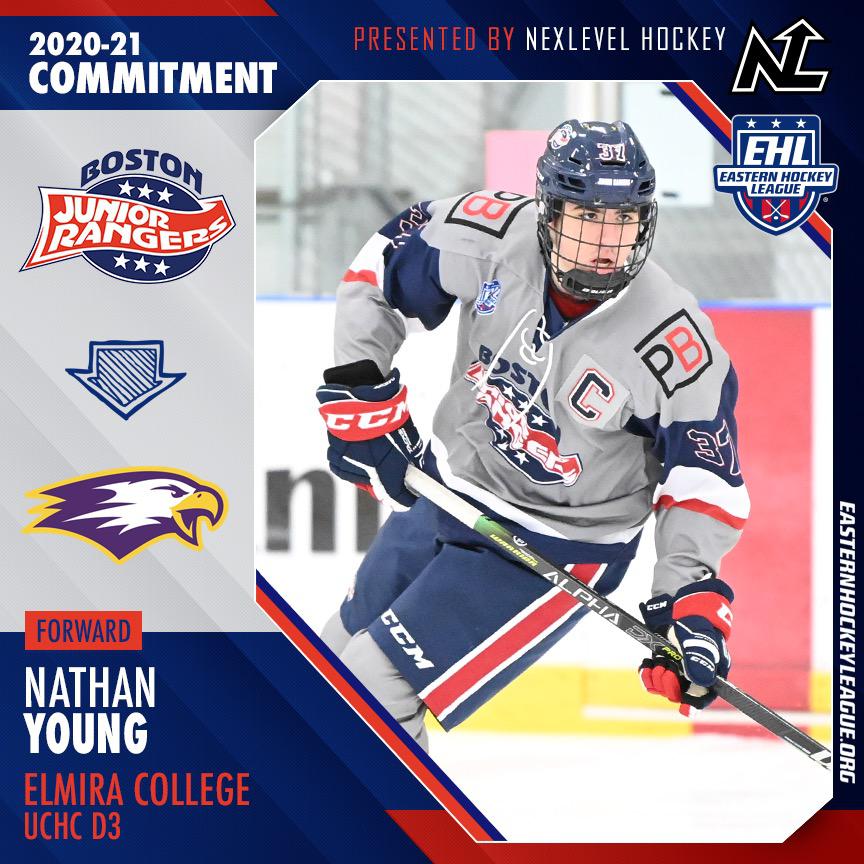