Rangers Welcome Rockets to Town for Round #2

TEWKSBURY, MA -- The day has arrived, as the Boston Jr. Rangers welcome the New Jersey Rockets to town for the start of their Quarterfinals series. In the regular season, the Rangers beat the Rockets 4-2 on October 9th, and then New Jersey turned the tables with a 3-2 victory on November 20th.

"This is going to be a battle," said Rangers Premier head coach Rich DeCaprio. "It goes without saying that the further you advance in the playoffs, the harder your opponents become. The Rockets are a quick team, with a number of guys that can score. We need to play strong defensively throughout the series, and make sure we capitalize on our chances."

Each team followed their own path into the Quarterfinals, as the Rockets finished the regular season 5th in the South Conference. After sweeping the Philadelphia Revolution in the First Round, New Jersey enters this weekend's series with plenty of momentum.

For the Rangers, their strong regular season earned them the #3 seed in the North Conference. After fighting off the Vermont Lumberjacks in a First Round series that went the distance, the Rangers carry their own version of momentum into the next round. 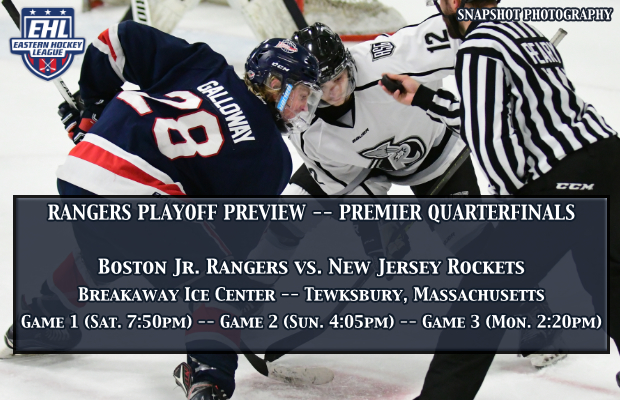