TEWKSBURY, MA -- It was a busy weekend for the Rangers organization as both the EHL and EHLP teams each hit the road to kick-off showcase play. Both squads swept their weekend set of games, combining for a record of 5-0-0. The EHL team took care of business in Walpole by beating both the New York Applecore and the Connecticut RoughRiders. With the pair of victories, the EHL remains in 1st place of the Boston Division with a record of 9-2-0. The EHLP team on the other hand extended their winning streak to 6 games as they went a perfect 3-0-0 at the Brewster Showcase.

"Ryan [Blair] and I are obviously very happy with outcome of this weekend," said Rangers EHL head coach and general manager Rich DeCaprio. "Obviously we need to build off of this, but to go 5-0-0 over the weekend is great, especially this early in the season.

On Friday afternoon, the Rangers traveled down to the first showcase of the season at Rodman Arena (Walpole, MA). When they arrived, they took on the New York Applecore for the 2nd and final time this season. Daniil Ovchinnikov ripped a snipe off the crossbar and in to give the Rangers the lead in the 2nd half, and that tally wound up standing as the game-winner. In net, EHL All-Star Nolan Egbert, had a 30-save shutout in the win. Will Roberts added a goal late to make it 2-0 final score.

On day #2 of the showcase the Rangers squared off against the 1st place Roughriders. After the Roughriders got on the board with a goal in the 1st half, Rangers forward Zach Norby tied the score with a power play goal. In the 2nd half, the two teams both had a pair of goals to send the game into overtime. John Grealish and Dan Barry were the respective goal scorers in that frame for the Rangers. In overtime, Rangers captain Damien Dangueuger scored just 1:42 into the extra frame to give his team their second win in as many days.

The EHLP squad headed down to Brewster Ice Arena this past weekend for 3 games against 3 South Conference opponents. On Saturday, the boys started off the showcase by facing off with the 5-3-0 New Jersey Renegades. Both teams scored a goal in the 1st half with the Rangers tally going to Kyle Liesener. The Renegades took the lead with a goal early in the 2nd half, however, it was quickly answered by Rangers forward, Ryan Gamber less than 20 seconds later. The Latvian native Danila Larionovs scored the game-wining goal for the Rangers just minutes before the end of the game.

Switching over to day #2 of the showcase, where the Rangers squared off against the New York Applecore. John Broadribb got the boys on the board first, but his tally was quickly answered by Chris Bednar of the Applecore to make it 1-1 after the 1st half. The Rangers dominated the second half, scoring 4 power play goals and ultimately winning the game by the score of 5-1. The goals in the second half came from Larionovs, Wesley, Roberts, and Whitaker.

On day #3 of the showcase, the boys squared off against a Jersey Wildcats for the first time this season. Steve Wesley and Sean Sullivan scored two goals early on in the 1st half and the squad didn't look back from there. Welsley added another goal along with Larionovs and Broadribb to give the Rangers a 5-1 win, and a perfect 3-0-0 weekend in New York.

The EHL team has an important divisional match-up against the 2nd place Walpole Express this afternoon. Following the rivalry game, the week doesn't get any easier as the EHL team will travel to the Ice Den to play the 1st place New Hampshire Avalanche (New England Division) on Sunday.

The EHLP squad on the other hand has a pair of games against the Philadelphia Little Flyers this weekend, both at home.

Along with the perfect 5-0-0 weekend, the Rangers also receive the news that DeCaprio will be part of the coaching staff that will lead Team EHL this upcoming Saturday against Umass Boston. Along with their coach, Nick Grinvalds and Nolan Egbert will be the 2 player representatives for the Rangers.

Grinvalds has 9 points through the first 11 games, while playing some solid defense on the blue line. The New Jersey native has also been a big contributor to the Rangers power-play unit, with 4 power-play points so far this year.

In net, Egbert has been 1 of the best goalies in the EHL so far this season, and was named the Goalie of the Month in September. His numbers to date include an 8-2-0 record that goes along with a 1.38 GAA, .943 save percentage, and 2 shutouts.

On Saturday, October 21st, the EHL All-Stars will travel to the campus of Umass Boston to face-off with the Division III Beacons. The EHL roster is comprised of at least 1 player from all 16 teams in the league, and the puck drop at the Clark Athletic Center is scheduled for 4:00pm. This will mark the first time that an EHL team has ever taken on a NCAA program. 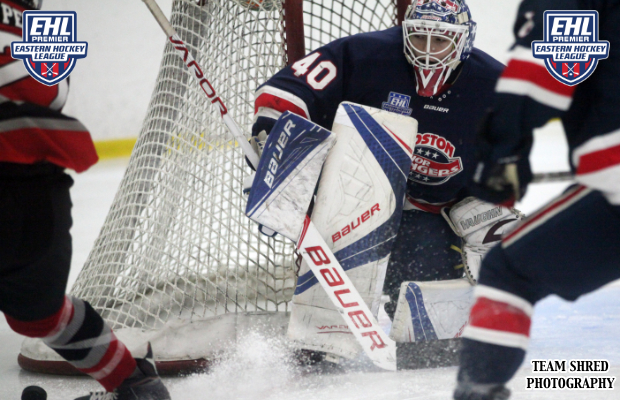