TEWKSBURY, MA -- It was a busy week for the Rangers organization as both the EHL and EHLP teams each participated in separate showcases.

The EHL team went 3-0-0 on the week and maintained their perfect showcase record. After the successful set of games, the Rangers still find themselves in 1st place of the Boston Division with a record of 16-4-0.

The EHLP squad hosted the November showcase at Breakaway Ice Center in Tewksbury, and came away with a 2-0-0 record when the action was finished. After the weekend the Rangers still sit in 2nd place in the North Conference with a record of 14-1-2.

"Each week is another step for our teams," said Rangers EHL head coach and general manager Rich DeCaprio. "To be perfect in showcase play is definitely something to be proud of, but Ryan [Blair] and I know that there is still lots of work left for our teams. The players know this as well."

On Wednesday night, the Rangers traveled up to Laconia for a matchup with the New England Wolves for the first time this season. Filip Steussloff got the Rangers on the board first with a goal just past the eight-minute mark win the 1st period. However, the Wolves would get one back at the end of the period to even the score heading into the break. The Rangers leading goal scorer, Daniil Ovchinnikov, put the boys back in front early in the next frame with his 8th goal of the season. Later in the period, Danny Sorabella would add a power-play goal to pad their lead. The Wolves would continue to fight back and would answer with two goals of their own to tie the game at 3-3 going into the final frame. After a scoreless 3rd period, the game headed into overtime. It only took 28 seconds into the overtime period for Sorabella to find the back of the net again, giving the Rangers the 4-3 victory. Ben Parker improved to 5-1-0 on the season with the victory, as the Rangers looked to carry the momentum into the Haverhill Showcase.

On Sunday, the boys opened up the showcase play with a nightcap game against the Philadelphia Little Flyers. This would be the final game between the two teams in the regular season season. The Little Flyers led 2-1 after the first half, with the Rangers lone goal coming from Sorabella. The second half of the game was a different story, as Sorabella picked up his 2nd goal of the contest to tie the game on the power-play.. The Little Flyers would grab the lead again, just to have the Rangers tie it up just under a minute later with a goal from Stuessoff. Despite trailing three separate times in the game, Ovchinnikov would put home the game-winning goal for the Rangers with just under four minutes left to play. Nolan Egbert stopped 31 shots in the victory, bringing his record up to 11-3-0 for the season.

To end a busy week, the squad went back to work the very next morning to finish the season series with the Philadelphia Jr. Flyers. After a scoreless first half, Jake Cagnina got the Rangers on the board first, just under six minutes into the second frame. The Jr. Flyers would tie the game at 1-1 in the final minutes and it looked like the game was headed for overtime. However, Ovchinnikov and the Rangers had other plans as the Russian put away his second game-winning goal of the showcase with just 25 seconds left in the game. With the win, the Rangers are now a perfect 4-0-0 in showcase play so far this season.

The EHLP squad started their busy weekend with a game against the Valley Jr. Warriors up at the Haverhill Valley Forum on Friday night. This was the second game between the two teams this season, with the Rangers winning the first matchup by the score of 5-2. Friday’s game wasn't much different as the Rangers held the Warriors to just 16 shots in the 2-0 victory. The two Rangers goals were both scored on the power-play, and came from Kyle Welch and Danila Larionovs. Bobby McCloskey and Cam Bernard combined for 16 saves in the shutout win.

On Sunday, the Jr. Rangers faced-off against the 1st place Philadelphia Jr. Flyers to complete the season series. The Jr. Flyers won the last matchup earlier in the season in overtime. This was a matchup between two of the EHLP's top teams and the Rangers came out flying out of the gate, jumping out to an early 2-0 lead with goals by Sean Sullivan and Steve Wesley. The Jr. Flyers would get one back before the end of the half to make it 2-1 going into the break. Another goal by the Jr. Flyers tied the game just under five minutes into the next frame, but the goal was quickly answered by Welsey again for his second tally of the contest. Larionovs would then add another goal to pad the lead and make it 4-2 with 14 minutes to play. However, just like the Jr. Flyers did in the first matchup in Tewksbury, they crawled their way back with a couple goals to knot up the game and sent it into overtime. It was a different ending this time however, as it was the Rangers who would score in the first minute of overtime, as Welch buried the game-winner in the extra frame.

The Rangers looked to remain perfect in showcase play on the year when they faced-off against the New York Applecore on Monday. This was the second and final time the two teams would play each other this regular season, with the Rangers winning the first matchup 5-1 at the Brewster Showcase. After a scoreless first half, John Broadribb got the Rangers on the board first with a goal just under until minutes into the second frame. After a boarding penalty, the Applecore tied up the game at 1-1, but it was quickly answered less than a minute later by Will Roberts. The score would remain 2-1 until the final buzzer as the Rangers maintained a perfect 5-0-0 record in showcase play so far this season. Spencer Krul stopped 23 out of 24 shots he faced for his 2nd win of the season.

The EHL squad will welcome the Wilkes-Barre/Scranton Knights to town on Friday at 7:50pm for the first matchup between the two teams this season. The boys will turn around the next day with a big matchup against the #1-ranked Philadelphia Revolution at 3:50pm, to conclude their play until after the Thanksgiving Holiday.

The EHLP squad on the other hand will travel to Walpole on Friday to play the Express, who are the only team to beat the Rangers in regulation this season. After a day off on Saturday, the boys will travel up to Laconia for an afternoon matchup with the New England Wolves. After this week, the squad is off until December 1st, when they start a three-game series on the road in Burlington against the Vermont Lumberjacks. 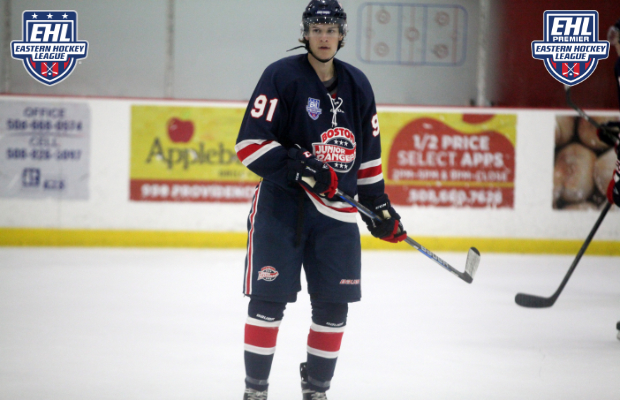