TEWKSBURY, MA -- Both Rangers squads each hit the ice for a pair of games this past weekend. The EHL team split their games and still sit in 1st place in the Boston Division with a record of 17-5-0. The EHLP team on the other hand took care of business this past weekend, winning both of their games. With the two wins they are still sit in 2nd place in the North Conference with record of 16-1-2, just two points behind the Vermont Lumberjacks.

On Friday night, the Rangers welcomed the Wilkes-Barre/Scranton Knights to town for the first matchup between the two teams this season. Zach Norby gave the Rangers the lead halfway though the 1st period. Anthony Nikolopolous and John Grealish would add a couple more goals for the Rangers as they took a 3-1 into the the 1st intermission. Both teams would each score two goals in the next frame to make it a 5-3 game, with the Rangers goals coming from Tyler Gardiner and Ryan Tierney. Ben Parker, would hold off the Knights in the final frame to preserve a 5-3 win. The '98 netminder made 20 saves in the win and improved his record to 6-1-0 on the season.

On Friday, the EHLP squad traveled down to Walpole for an evening matchup with the Express. This was the third matchup between the two teams this season with the Express winning the first game and the Rangers taking the second. The 5-3 loss at the beginning of the year to the Express, remains the only loss in regulation for the Rangers this season. The Rangers top two scoring forwards, Steve Wesley and Danila Larionovs, tallied the first two goals of the game giving their team a 2-1 lead at the end of the 1st period. Kyle Welch would put the boys up 3-1 with a goal just 38 seconds into the 2nd frame. The Express would answer with a goal of their own less than a minute later to make it a 3-2 score. However, Tim Rye would net his 4th goal of the season to put the Rangers ahead 4-2 going into the 3rd period. Larionovs would add an insurance goal in the 3rd, to give the Rangers a 5-2 win. Bobby Mccloskey, stopped 23 shots in the victory bringing his record up to 4-0-0 on the year.

On Sunday, the squad headed up to Laconia for a matchup with the New England Wolves. This was the third game between the two teams this season, with the Rangers winning the previous two by a combined score of 13-3. Sunday wasn't much different, as  Sean Sullivan scored two goals in the first two minutes of the game to open up the floodgates. Eric Roberts would add another goal to give the Rangers a 3-1 lead at the end of the 1st period. Matt Mchpherson would put the game out of reach in the 2nd with a couple goals of his own to extend their lead. Welch would finish off the scoring on the power-play in the final frame to give the Rangers a 6-1 win. Cam Roberts picked up a pair of assists in the win and was named the EHLP Defenseman of the Week. The penalty kill was working for the Rangers as the Wolves were 0-11 with the man advantage. Cam Bernard played a strong role in net, as he stopped 37 shots for his 2nd win of the season.

With Thanksgiving Holiday coming up, both teams are off next week as the EHL team doesn't play again until November 29th when they will travel to Walpole for an afternoon matchup with the Express. After that, the boys will travel to Burlington for a pair of games against the Vermont Lumberjacks the following weekend.

The EHLP squad is off until the first day of December where they will kick off an exciting three-game series with the Lumberjacks in Burlington. 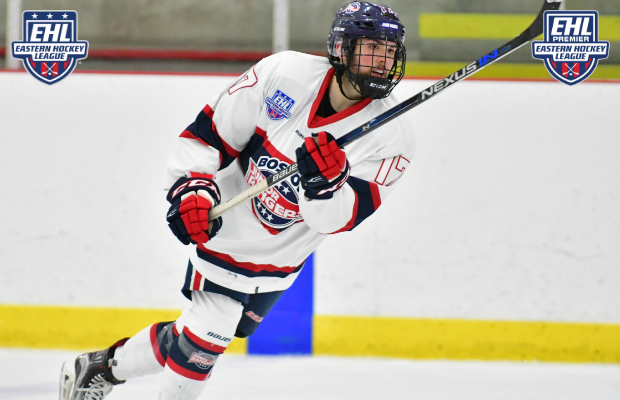