TEWKSBURY -- Both Rangers squads hit the ice for a combined five games this past weekend. The EHL team won all three of their contests by a combined score of 17-5. With the wins, the Rangers continue to sit in 1st place in the Boston Division with a record of 22-6-0.

The EHLP squad also took care of business over the weekend sweeping the Warriors to keep their stellar 14-game winning streak alive, and remain at the top of their respective set of standings.

On Thursday, the Rangers hosted the Total Athletics Seahawks for the third time this season. Damien Dangueger put the Rangers ahead just under two minutes in the game with a power-play goal. The Seahawks would tie the game up a few minutes later. However, Ryan Tierney would add another goal at the end of the frame to give the Rangers a 2-1 lead at the break. Blair Barrows and Filip Steussloff scored for the Rangers in the second frame to give them a 4-1 advantage. The Seahawks would get a goal back at the beginning of the third period, but it was quickly answered by Anthony Nikolopolous of the Rangers. Matt Roe added an insurance goal at the end of the game for his first goal of the season with the Rangers, and the boys cruised to a 6-2 victory. Nolan Egbert stopped 26 out of 28 shots in the win.

On Saturday, the boys hosted the Valley Jr. Warriors at Breakaway Ice Center for the first game between the two team this season. Danny Sorabella got the Rangers got the board just under a minute into the game and they never looked back from there. Andrew Keith and Zach Norby added two more goals in 1st period to give the Rangers a 3-0 after the frame. Bobby Kinsey had the lone goal in the 2nd period thanks to a dish from Jake Cagnina. The Warriors would get a goal back in the first few minutes of the 3rd period. However, Roe would answer for the Rangers in route to a 7-1 win. John Grealish and Sorabella had the other 3rd period tallies. Egbert stopped 21 shots in the victory for his 14th win of the season.

Shifting gears to Sunday, and the Rangers traveled up to Haverhill for another matchup with the Warriors. Sorabella put on a show for the Rangers as he scored the team's first three goals of the game. The Warriors would score a couple of goals of their own in the 3rd period to make it a 3-2 score, before Filip Steussloff added an insurance goal to help give the Rangers a 4-2 win. Ben Parker stopped 33 out of 35 shots in the victory, improving his record up to 8-1-0 on the season.

Following his huge eight-point weekend, Sorabella was the EHL Forward of the Week for the first time in his junior career.

On Saturday, the EHLP squad also kicked off a home-and-home series with the Valley Jr. Warriors. After a scoreless 1st period, Will Roberts got the Rangers on the board first on the power-play just under five minutes into the middle frame. Matt McPherson added another goal at the end of the perod to give the Rangers a 2-0 lead. From there, Cam Bernard held strong in net, on his way to stopping all 21 shots he faced in a 2-0 victory.

Switching over to Sunday, the boys traveled up to Haverhill with the EHL squad for another game against the Warriors. Following suit of Sorabella and the EHL squad, Roberts picked up a hat-trick of his own for the EHLP team. Roberts' goals were the only tallies scored for the Rangers in the game as the boys went on to win the game by a final of 3-2. Spencer Krul made 29 saves in the victory for his 4th win of the season.

The EHL squad has a busy week coming up before the holiday break. They will travel to Bedford on Wednesday for a divisional matchup with the East Coast Wizards, and then get set for the December Showcase. The EHLP squad on the other hand has just one game next weekend on Saturday in Walpole against the Express. 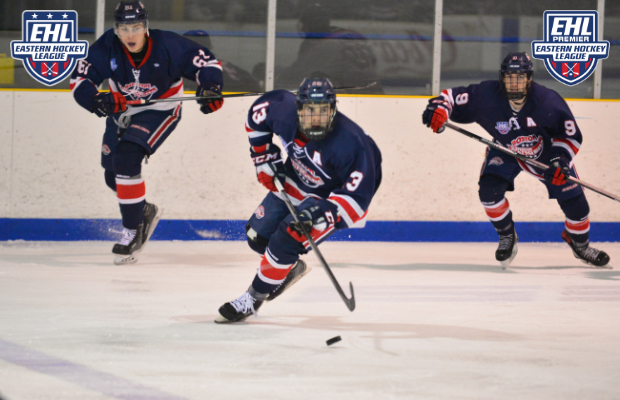