TEWKSBURY -- The Eastern Hockey League put together the third showcase of the season this past Sunday and Monday at Rodman Arena in Walpole, MA. There were over 60 scouts from various schools and programs in attendance over the course of the two-day event.

Coming into the showcase, the Rangers were ranked #1 in latests #Eshow Power Rankings, and were also undefeated in showcase play. On Sunday the squad put their six-game winning streak on the line against the Connecticut Oilers. The Rangers had previously beaten the Oilers 7-1 earlier in the season and Sunday wasn't much different. Zach Norby had a pair of goals in the first half that were both assisted by Filip Steussloff and Daniil Ovchinnikov, and the Rangers took a 2-1 lead into the intermission. Tyler Gardiner scored his 11th goal of the season, which came on the power-play, to give the boys a 3-1 lead just over five minutes into the 2nd frame. The Oilers would respond just four minutes later to cut the lead in half. However, Blair Barrows and Filip Steussloff added a pair of insurance goals to help give the Rangers the 5-2 win. Nolan Egbert stopped 25 out of 27 shots in the victory, and paired with his win over the Wizards on Wednesday, was named the EHL Goaltender of the Week.

Switching gears over to Monday, the squad faced-off against the New York Bobcats Royals to complete the season series with their Central Division opponent. Matt Roe opened up the scoring for the Rangers just passed the 14-minute mark of the 1st half. Damien Dangueuger added another goal a few minutes later to give the Rangers a two-goal lead at the break. Both of the 1st half goals were assisted by John Grealish. Steussloff scored just 33 seconds into the 2nd frame to extend the Rangers' lead to three goals, and Dan Barry would add the final tally towards the end of regulation. Ben Parker made 12 saves for his first shutout of the season.

The league is headed into the winter intermission for the next couple weeks as the Rangers won’t resume play until January 7th when they will host the Total Athletic Seahawks. Below you will find the season recap to date for the Rangers' EHL team.

The Rangers have been ranked at the top spot in the #Eshow Power Rankings for the last two weeks now as they have put together quite a season up to this point. Through the first 31 games, they currently sit in 1st place in the Boston Division with a record of 25-6-0 and are five points ahead of the 2nd place Walpole Express. The Rangers hold a 7-4-0 record against divisional opponents so far this season, with seven division matchups still remaining. The squad has also excelled in showcase play as they are the only EHL team that owns a perfect record in #EHLShowcaseSeries play. Along with the perfect record, the Rangers have also outscored their opponents 21-9 in the #EHLShowcaseSeries. The Rangers have scored 119 total goals so far this season, which equals out to a 3.84 goals per game average. On the flip side, the squad has only allowed 66 goals this season as Nolan Egbert and Ben Parker have helped the Rangers to a 2.13 goals against per game average. The Rangers are good for 18.7% on the power-play this season and are 4th in the EHL in penalty kill percentage at 85.4%.

Danny Sorabella leads the team in scoring with 15 goals and 20 assists (35 points), while Daniil Ovchinnikov isn't far behind with 30 points of his own, and the Russian also leads the team in game-winning goals with six. Zach Norby has also been a force on that top line with 13 goals and 27 goals on the season. Norby leads the entire team in power-play points as well with 10. EHL All-Star, Nick Grinvalds, leads all defensemen on the team with 23 points. Last, but not least, Egbert leads the entire EHL in wins with 16 on the season, along with maintaining a stellar 2.09 GAA. 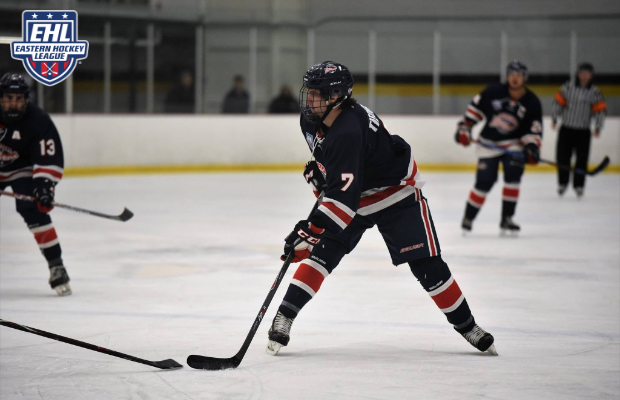