Zohovs Set to Join the KHL

BOSTON, MA -- Eriks Zohovz spent the 2015-16 season with the Boston Jr. Rangers. That year was Zohovs' first with an American team, as he racked up 34 points in 31 total games. Following that season, Zohovs continued his development during the 2016-17 campaign with the Shreveport Mudbugs of the North American Hockey League (NAHL). In 35 games with the Mudbugs, Zohovs continue to average greater than a point per game, as he racked up 39 this past season. From the EHL to the NAHL and beyond, Zohovs journey continued this season as he began the year with the Youngstown Phantoms of the United States Hockey League (USHL). Through the first 10 games of the year, Zohovs had a goal and 2 assists to his name. The native of Latvia has recently determined the next step in his career as he gets set to leave the United States.

“Eriks was a great player for us," said Rangers head coach and general manager Rich DeCaprio. "From the first day at practice we knew we had someone special on our team. His skill set and deceptive speed set him apart from everyone else. We were his first stop in the US and are proud of how he has climbed the ladder and continued to develop at every level of junior hockey.”

From the EHL, to the NAHL, to the USHL, and now the Kontinental Hockey League (KHL). It's been a unique journey for Zohovs, as he now gets set to begin his professional hockey career with HC Kunlun Red Star.

“The Boston Jr. Rangers was my first team that I played for in America," said Zohovs. "I had a great experience with the Rangers, and the EHL helped add another aspect of my game. Coach DeCaprio, Coach Blair, and the entire organization were very professional, and I thank them for the time they spent with me." 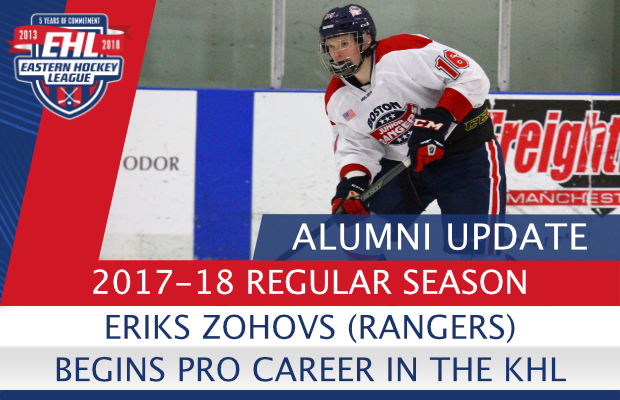