Rangers Forward Heading to the NESCAC this Fall

TEWKSBURY, MA -- The Boston Jr. Rangers are pleased to announce that Danny Sorabella has committed to Wesleyan University for the Fall of 2018. Sorabella is in his fourth season of junior hockey, and he has spent all of them with the Rangers. This season and last season, the '98 has been one of the top forwards on the Rangers' EHL team and he's tallied 62 points in 98 career games to date.

"We are very proud of Danny and the work he has put in over the past four seasons with our program," said Rangers EHL head coach and general manager Rich DeCaprio. "He’s been one of the hardest workers every day both on and off the ice. I’m confident his determination at Wesleyan will have a major positive impact on his hockey, academic, and life goals."

DeCaprio mentioned Sorabella's hard-working mentality, and that's an aspect of his game that coaches across the EHL have recognized. The Massachusetts native is not afraid to go into the dirty areas of the ice, and he often is the one who comes out with the puck. With the next step achieved, Sorabella knows a lot of credit has to be given to the people around him, so he took some time to reflect and give thanks for his commitment.

"I feel extremely fortunate to be headed to such a highly regarded school in Wesleyan University," said Sorabella. "Reaching this point represents the realization of an objective that I have been pursuing for quite a few years. In addition to the academic experience, I am also really looking forward to joining the Cardinals hockey program and working with Coach Potter, Coach Lun, and a very strong group of returning players. I am so grateful for the experience that I have had with the Rangers program over the past several years. Coach DeCaprio has meant so much in my development, serving as coach, mentor, and advocate. He has emphasized investing trust in the process along with hard work, leadership, and discipline. Coach Blair has also made a big difference in further developing my game, dedicating one-on-one time during and after practice, sharing insights and ideas to add into my repertoire. There have been so many people who have helped me along the way, and I am extremely grateful. Hockey is truly a family sport, and the support of my parents, siblings, grandparents, and extended family has always served as a great motivator on and off the ice. I have been incredibly lucky to have been surrounded by such great teammates and to have shared in our collective success. As was the case in previous years, this season’s Ranger team is really a great group of guys and their skill and dedication has pushed me to be at my best. If feels great to have reached this objective, and I am looking forward to addressing a number of others, including a strong playoff run this season."

After beating the Express by the score of 5-3 yesterday afternoon, Sorabella and the Rangers hold a four-point advantage over their division rival for the top spot in the standings. The team will get back to work this weekend as they host the Vermont Lumberjacks for a pair of games on Saturday and Sunday. 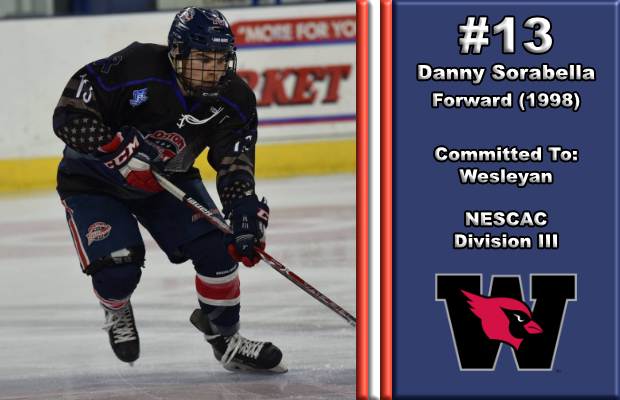