Rangers Ready for Biggest Weekend of the Season

TEWKSBURY, MA -- Both Rangers teams have playoff matchups this weekend, and they'll each get started on Friday. The EHL squad will face-off in a best-of-three series against the Walpole Express, while the EHLP squad is set to host the Vermont Lumberjacks for their best-of-three series.

After the First Round bye, the EHL squad will start a best-of-three series with #3 seed Walpole Express. The winner will advance to the EHL Frozen Finals at Providence College. The Rangers held a 4-2-0 record against their fellow Boston Division opponent in the regular season and won the most recent matchup by a 4-2 score at the end of February.

The Express are fresh off a two-game sweep against the New England Wolves in the First Round and won six out of their last seven games of the regular season. They are led by forward Chris Peters who put up 85 points in the regular season and already has six points through two games in the playoffs. The best-of-three series with Walpole will start on Friday at Breakaway Ice Center at 4:30pm. Game 2 will be played on Saturday at 4:00pm at Rodman Arena, and if necessary, Game 3 is scheduled for Monday with the time still to be determined.

The EHLP squad won their First Round matchup this past Saturday against the New England Wolves by a score of 7-2. Danila Larionovs led the way with a pair of goals and an assist and both Cam Roberts and Steve Wesley each recorded two points of their own in the win. Dean Kern was solid in net stopping 19 shots, to help the Rangers advance to the North Conference Finals.

The Rangers had the Lumberjacks number in the regular season with a 6-1-0 record against their division rival. However, the Lumberjacks won the most recent matchup between the two teams by a 3-0 score. The Lumberjacks are fresh off a 6-0 shutout win against the Walpole Express in the Second Round, and won their last three games of the regular season. All three games of the best-of-three series will be played in Tewksbury, with Game 1 scheduled to start on Friday at 7:40pm. Game 2 is scheduled for a 12:30pm puck drop on Saturday, and if necessary, and Game 3 will be played if necessary on Sunday at 1:00pm. 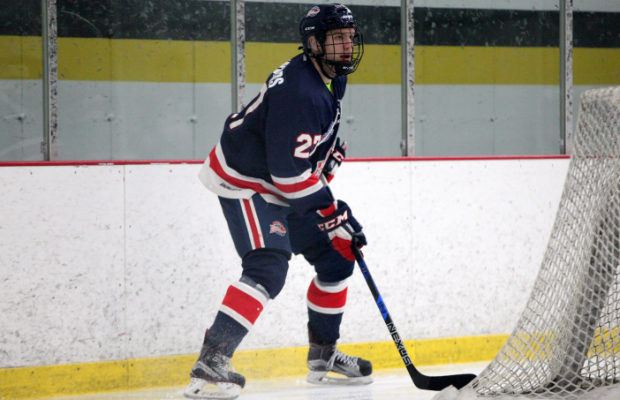