TEWKSBURY, MA -- Both Rangers team’s punched their tickets to Providence College this past weekend with the EHL team sweeping their best-of-three series against the Walpole Express, and the EHLP squad beating the Vermont Lumberjacks in Game #3 of their series. The EHL team is ready for the EHL Frozen Finals, where they will start their Round Robin on Thursday night. The EHLP squad on the other hand, will play in a winner take all Championship Game on Sunday.

After enjoying a First Round bye, the EHL squad faced-off against the Walpole Express in the second round with a trip to the EHL Frozen Finals on the line. Jared Bernis scored the first goal of the series to give the Rangers a 1-0 lead with just nine seconds remaining in the 1st period of Game #1. After a scoreless 2nd frame, both Ryan Tireney and John Grealish found the back of the net early in the 3rd period to extend their lead out to three goals. The Express would ruin the shutout in the final minutes, but the Rangers held on to take Game #1 by a score of 3-1. Umass Boston commit, Nolan Egbert, stopped 36 shots in the winning effort.

Shifting gears to Saturday, the squad traveled to Rodman Arena and looked for the sweep in Game #2 of the best-of-three series. It took just 21 seconds  for Mike McPherson to give the Rangers an early one-goal lead. However, the Express came out strong in the 2nd period with a pair of goals of their own to take a 2-1 lead into the final frame. Grealish was the next goal scorer, as he tied up the game near the 13-minute mark of the 3rd period. The forward wasn't done there, as his scored his second goal of the period and third of the series with just under three minutes left in the game. McPherson added an empty-netter in the final minute for his second tally of the game as well, to give the Rangers a 4-2 victory. Egbert was solid between the pipes, stopping 40 shots in the series-clinching contest.

The Rangers started their best-of-three series with the Vermont Lumberjacks on Friday, with a trip to the EHLP Championship Game on the line. Both Will Roberts and Sean Sullivan scored 1st period goals to give the Rangers a two-goal lead heading into the 1st intermission. Sullivan scored another near the 15-minute mark of the 2nd frame, but the Lumberjacks answered with a goal of their own to make it a 3-1 game at the second break. The Rangers captain completed the hat-trick in the 3rd period, as Sullivan gave the Rangers a three-goal advantage with five minutes left. The EHLP Forward of the Year, Danila Larionovs, added an empty-netter to seal a 5-1 win and Game #1 of the series. Spencer Krul stopped 35 shots in the winning effort.

The Lumberjacks grabbed the lead just 26 seconds into the Game #2 and had a strong performance from their goaltender as the Rangers were shutout by a 3-0 score. The finale of the series was then pushed from Sunday to Monday, and was played at Stoneham Arena.

The Rangers got ahead of the Lumberjacks with a goal 25 seconds into the game from Steve Wesley. Jon Fowler added another 1st period goal with a slapshot from the point, to give the Rangers at two-goal advantage at the break. Tim Rye gave the Rangers some insurance by crashing the net after a Fowler shot from the point to make it a 3-0 game. The Lumberjacks would respond with a goal near the end of the frame to cut the deficit to 3-1. However, Dean Kern, stopped 20 shots in the 3rd alone and had 41 total saves in the game to preserve the series-clinching win. Larionovs added an empty-net goal in the final minute to cap off the 4-1 win. Fowler, Wesley (2), Kyle Welch, and Cam Roberts all recorded at least one assist in the victory, as the Rangers were crowned North Conference Champions for the third straight season.

All of the remaining Rangers games this season for both the EHL and EHLP will be played at Schneider Arena on the campus Providence College. The EHL squad will start their three-game Round Robin on Thursday with a game at 7:00pm against the Philadelphia Little Flyers. The squad will return to the rink the next day to face-off against the EHL Regular Season Champion, Philadelphia Revolution, at 4:00pm. The boys will finish their Round Robin on Saturday with a game against the New Hampshire Avalanche at 1:00pm. The two teams with the best record will then advance to the EHL Championship Game on Sunday at 1:00pm.

The EHLP squad on the other hand, will face-off against the Philadelphia Jr. Flyers in the EHLP Championship on Sunday at 10:00am. 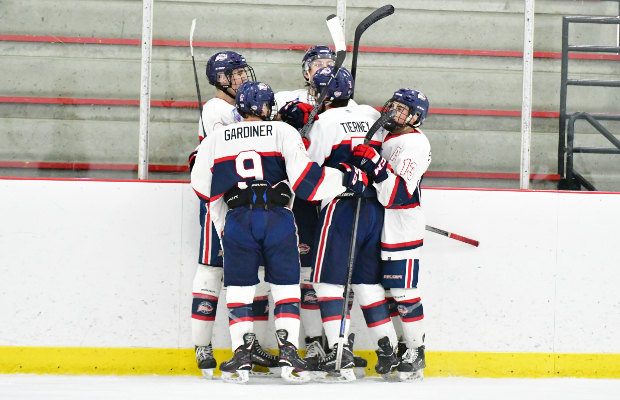