TEWKSBURY, MA -- The Boston Jr. Rangers are pleased to announce that Mike McPherson has committed to Plymouth State University for the Fall of 2018. The '97 spent the better part of three years with the Rangers organization, playing for the EHL and EHLP teams.

"We are very happy for Mike on his commitment to Plymouth State," said Rangers EHL head coach and general manager Rich DeCaprio. "Mikey developed with us and climbed the ladder from EHLP, to EHL, and then had stints in both the NAHL and CCHL. Ultimately I think he realized our team and our league was the best spot for him to finish his junior career and make his college commitment. When we got him back in January, he helped us tremendously. He’s a goal scorer and a competitor, but most importantly he’s a great kid. He will have a great college career!"

McPherson's time with the Rangers began with the EHLP team in the 2015-16 season, and that year he tallied an even 100 points in 38 total games. The native of Somerville, MA was named EHLP's Most Valuable Player, and was a key piece in the Ranger's first EHLP Championship.

McPherson moved up the ladder to the EHL for the 2016-17 season, and his scoring didn't skip a beat, as he led the league with 35 goals in the regular season. Including the playoffs, McPherson notched 69 total points in 53 total games that year. Next up for the talented scorer were a pair of stints in the NAHL and CCHL this past season, before ultimately returning back to the Rangers for the playoff run.

In his final set of games in the EHL, McPherson went off for 31 points in 15 total games. All in all, it was a fabulous junior career for McPherson, and he is very glad to have ended it with the Rangers.

"There is nothing more I will miss in life than coming to the rink everyday with the guys and knowing that I am going to improve as a hockey player," said McPherson. "My time spent with the Rangers in the EHL was enjoyable and everything I could ask for from a developmental standpoint. Both Coach DeCaprio and Coach Blair were dedicated day in and day out, not only to win hockey games, but more importantly to make their players ready for the next level. They changed how I viewed the game of hockey and showed me how the game should really be played with a balance of fun, intensity, and poise. I could not have picked a better team and family to play for in a steadily improving and already talented league. I am extremely excited to start my NCAA journey with Plymouth State University!" 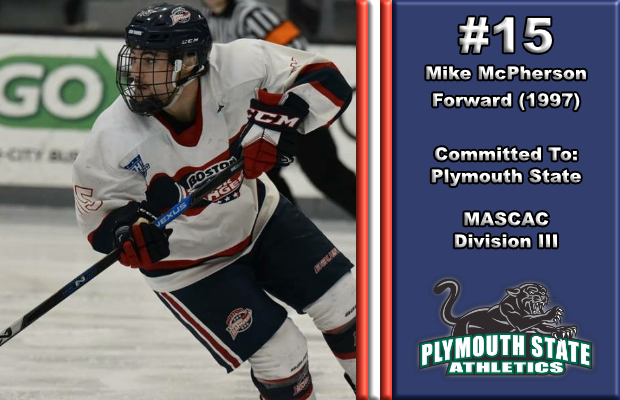