EHL Alum Set to Join Falcons in the Fall of 2019

TEWKSBURY, MA -- Blake Bride, an alumni of the Boston Jr. Rangers, has committed to the Air Force Academy for the Fall of 2019. The '98 spent the 2016-17 season with the Rangers, racking up a total of 46 points in 52 total games. Following the end of the season, Rangers' head coach and general manager Rich DeCaprio sought out to help Bride land a spot on a North American Hockey League (NAHL) team for the 2017-18 campaign. The native of Broomfield, CO was able to land a roster spot, as he started the season with the Minnesota Wilderness. Following the NAHL Showcase in September, the Odessa Jackalopes acquired the forward, and it was at this point when his season really took off. Bride finished the year on the Jackalopes roster, tallying 53 points in 55 total games.

"I am very happy for Blake," said DeCaprio. "He is one of my favorite players that I have ever had the pleasure of coaching, and he truly works harder than everyone else. We told him all the time that he had the talent to play Division I hockey, and we are very proud of his accomplishment. I am really looking forward to watching him play at the next level."

For Bride, while he only played two seasons of junior hockey, he knows each year was very key towards his development. Looking back on the 2016-17 season in the EHL, Bride knows that year in particular really helped him make the jump that he needed.

"Playing in the EHL was the best thing for me at the time," said Bride. "It was my first year of juniors and all I remember when I first got out to Boston was me questioning if I was going to be able continue my success at this next level. My first few games I was intimidated by the talent I was going against. I thought I was going to be able to do whatever I want and put up points, no questions asked. I soon realized that it was okay to play and develop myself into a more well-rounded player. Coach DeCaprio and Coach Blair were very helpful in my growth. They gave me the push and hope that I needed. They taught me to work hard at practice and off-ice training. I wouldn’t be here without these coaches and the Boston Jr. Rangers organization."

While Bride's commitment is the most recent display of a player going from the EHL to the NAHL, and then on to college hockey, he isn't the only Rangers' player to have followed that pattern. Kolby Vegara was a key piece on the blue line for the Rangers during their 2015-16 season. Following that year, Vegara spent the 2016-17 and 2017-18 seasons with the Philly Rebels in the NAHL, and now he'll join the UMass Minutemen this Fall.

"The EHL helped me to begin to develop all parts of my game, and gave me the opportunities to grow as a player before making the jump to the NAHL," said Vegara. 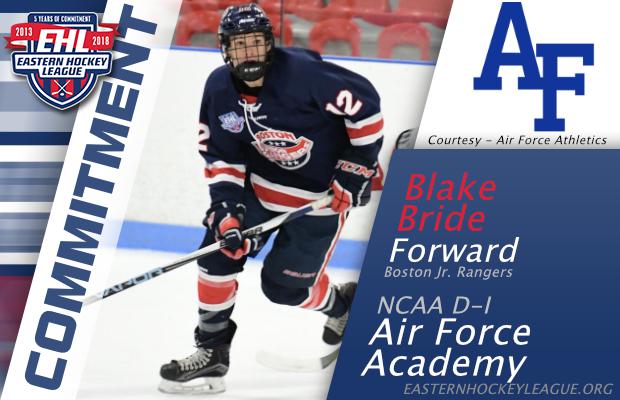