EHL Team Coming Together After Pair of Tough Bounces

TEWKSBURY, MA -- Both Rangers squads were back in action this past weekend, as the EHL team dropped both of their matchups, but came away with a point in an overtime loss on Saturday night. Despite the losses, the EHL squad still sits in 2nd place in their division, and they are currently in 5th place overall in their conference with a record of 23-13-4. The Premier team on the other hand, took care of business in their two games over the weekend, as they continue to close in on another regular season championship.

On Friday, the EHL team traveled down to Walpole to face-off against the Express for the final time this season. The Rangers beat the Express in overtime in the first matchup back in December. Danila Larionovs gave his team the early lead around the 11-minute mark of the opening period. However, the Express would even things up at one goal a piece just a few minutes later. The Express would go on to take the lead on the power-play in the 2nd frame, and held the Rangers off for the rest of the game, to win by a final score of 2-1. Aiden Curry stopped 34 shots in the losing effort.

On Saturday, the squad wrapped up their regular season series with the 1st-place New Hampshire Avalanche at Breakaway Ice Center. Going into Saturday’s game, the Rangers held a 1-4-0 record against the Avalanche so far this season, and were looking to make up some ground in the standings. After a scoreless 1st period, the Avalanche took a quick two-goal lead, with a pair of goals in the first couple minutes of the 2nd frame. The game remained 2-0 until Anton Metelev gave the Rangers some life with a goal on the power-play with 5:11 left in the game. Just 46 seconds after that, the Rangers leading scorer Andrew Keith tied up the game with his 23rd goal of the season. The game would head into overtime, but unfortunately, the Avalanche came away with just one point in a 3-2 defeat. Billy Girard was busy in net, stopping 39 shots in the overtime loss.

On Saturday, the Rangers welcomed the Connecticut Chiefs to town for their 4th matchup of the regular season. Heading into the Game of the Week on Saturday, the Rangers owned a 2-0-1 record over their conference opponent, after winning the most recent meeting by the score of 5-2. Despite that, Saturday’s game got off on a different foot as the Chiefs took an early two-goal lead in the 1st period. Emils Zelcs put the Rangers on the board with a goal near the halfway point of the 2nd frame to cut the deficit in half. The Chiefs would respond by regaining the two-goal advantage early in the 3rd period, but Tanner Caldarola answered with two goals of his own, forcing the game into overtime. The boys kept the momentum on their side in overtime, as Josh Barton found the back of the net in the first minute to give the Rangers the 4-3 victory. Bobby McCloskey stopped 21 shots in the win.

On Sunday, the squad welcomed the New England Wolves to town for a key conference matchup. Going into Sunday’s game, the Ranges held a 3-2-1 record against their rival this season, and the Wolves sat just five points back from the Rangers at the top of the conference. Steve Johnson put the Rangers on the board first with a goal near the 11-minute mark of the 1st period. Just over a minute later, the Rangers leading scorer, Matt Orlando gave his team a two-goal advantage. The Wolves answered back with a goal in the opening minutes of the 2nd frame, but Dennis Engelson gave the Rangers the two-goal lead right back, with a tally just a few minutes later. However, the Wolves would rally with a pair of goals later in the period to knot up the game at three apiece. The score wouldn't stay tied for long though, as Orlando put the Rangers in front just 44 seconds later, a lead that the home team wouldn't let go. McCloskey was able to hold the Wolves off for the rest of the game, stopping 22 shots en route to his 16th win of the season.

The EHL team will look to turn things back around this week starting with a road matchup against the New England Wolves on Thursday, and followed up by a pair of home games against the Vermont Lumberjacks this weekend.

On the flip side, the EHLP won't return until Friday night, when they kick-off a three-game series at home against the Vermont Lumberjacks. After that, they will play their final home game of the regular season on Wednesday the 20th against the Valley Junior Warriors. Please note this game is taking place at Stoneham Arena. 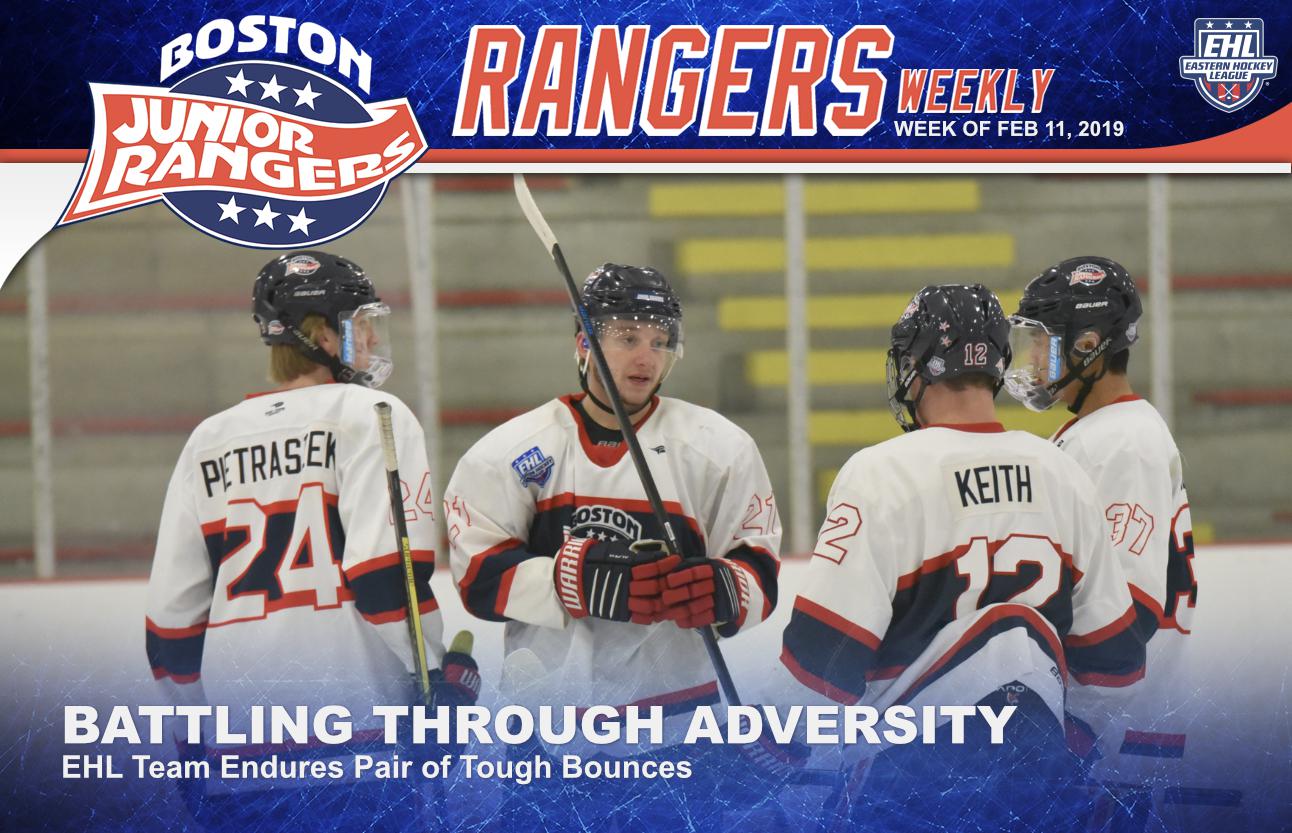