TEWKSBURY, MA -- Both Rangers teams were back in action this past week, as the EHL team dropped both of their matchups and have moved into 3rd place in their division, with a record of 24-15-4. Overall, the Rangers are in 6th place in their conference.

The EHLP team on the other hand, went 3-0-1 over the last week and clinched the Regular Season Championship for the second straight year.

On Saturday, the EHL squad welcomed the Vermont Lumberjacks to town for a pair of matchups to finish off the season series with their division rival. Going into the weekend, the Rangers held a 1-0-1 record against the Lumberjacks, beating them up in Burlington, VT back in November. However, the Lumberjacks stuck first on Saturday, with a goal in the opening minute of the contest. The Rangers then fell behind 2-0 after surrendering a power-play goal just under five minutes into the 2nd frame. Jonah Nash put the Rangers on the board and cut the deficit in half with a goal at the halfway mark of the period. The Nash tally wasn't enough though as the Lumberjacks tacked on another goal in the 3rd, and won the game by a final score of 3-1. Billy Girard was busy in net, stopping 33 shots in the loss.

On Sunday, Go Uemura put the Rangers on the board first with a goal just past the halfway point of the 1st period. The Lumberjacks came back to tie the game at one goal apiece in the 2nd frame, but Jake Blackwell gave the Rangers back the lead just over two minutes later. Connor Galloway then gave the Rangers a two-goal advantage around the seven-minute mark of the frame for his 20th point of the season. However, the Lumberjacks rallied for three goals in the closing minutes of the 2nd period and took a 4-3 lead into the break. The Lumberjacks scored again early in the 3rd period to go up 5-3, but Will Fisher cut it back to a one goal lead on the power -play with 6:45 remaining in the contest. However, the Lumberjacks held the Rangers off for the remainder of the contest and added an empty-net goal in the final minute to win the game by a final of 6-4. Aiden Curry stopped 30 shots in the loss.

On Friday night, the Premier team kicked-off their three-game series with the Lumberjacks. Going into the final series of the season between the two teams, the Rangers had already beaten the Lumberjacks four times back in November by a combined score of 21-8. Friday’s game followed similar path as Tanner Caldarola gave the Rangers an early lead just 1:20 into the game. The Lumberjacks tied the game just after the 10-minute mark of the frame, but Matt Orlando gave the Rangers back the lead just a couple minutes after. Cam Mackenzie followed with a goal from the point near the end of the period, to give the Rangers a 3-1 lead going into the intermission. It didn't take long for the Rangers to get back on the scoresheet, as Blake Hoffman converted on the power-play just 46 seconds into the 2nd period, to give the Rangers a 4-1 lead. Caldarola added another goal a few minutes later and the flood gates opened up from there as the Rangers added five more goals in the period, and took a 10-2 lead into the 2nd intermission. Orlando (3), Levi Hensley, and Emils Zelcs had the 2nd period goals. The Lumberjacks added a goal in the 3rd, but the Ragners cruised to a 10-3 victory. Cam Libby stopped 28 shots in the win.

On Saturday afternoon, the squad returned to Breakaway Ice Center for the second game of the series and it got off to a bit of a rocky start, as the Lumberjacks took an early lead just 17 seconds into the game. It didn't last long though, as the Rangers came back with four 1st period goals to take a 4-2 lead into the break. Hoffman (power-play), Luke Marsh, Nick Weaver, and Jake Mecrones had the 1st period tallies. Caldarola gave the boys a three-goal advantage with a power-play goal near the end of the 2nd frame. Both Zelcs and TJ Aiello added 3rd period goals and the Rangers cruised to victory again, this time by the final score of 7-2. Bobby McCloskey stopped 25 shots en route to his 17th win of the season.

On Sunday morning, the Rangers eyed the season sweep of the Lumberjacks, but fell behind early in the 1st period. Hensley evened things up near the five-minute mark of the frame, but the Lumberjacks quickly answered to take back the lead. The back and forth action ensued as Mackenzie tied up the game at two goals apiece, with just under three minutes remaining in the period. The Lumberjacks added a pair of goals early on in the 2nd frame to take a 4-2 lead, but Saunders Penn cut the deficit down to one goal with a tally in the closing minutes of the period. Max Stephens tied the game near the halfway point in the 3rd to force overtime, but unfortunately, the Lumberjacks scored in the first minute of extra time to take the extra point.

On Wednesday afternoon, the Rangers capped off their season series against the Valley Jr. Warriors at Stoneham Arena. The Rangers had already beaten the Warriors five times this season and Wednesday’s matchup wasn't any different as Josh Barton put the Rangers on the board first on the power-play, just under five minutes into the game. Dennis Engelson, Matt McPherson, and Brad Mackin followed with three more quick goals as the Rangers took and early 4-0 lead. The Warriors responded with a pair of quick goals of their own just a few minutes later to cut the deficit back down to two goals. The Rangers came right back as McPherson and Zelcs added goals near the end of the frame to go up 6-2 at the break. The Rangers continued to pour it on in the second with six goals in the period to take a 12-2 lead. Barton, Zelcs, Orlando, Mitch Gillespie, Hensley, and Aiello had the 2rd period tallies. The squad picked up right where they left off in the third as Weaver, Steve Johnson, and McPherson added goals and the Rangers won by a final score of 15-3. Libby stopped 20 shots in his 12th win of the season.

Both regular seasons are coming to an end and playoffs are right around the corner.

The EHL team is off until next Wednesday, when they will play their final home game of the season against the Vally Jr. Warriors at 12:00pm. They will then finish their regular season on the road with matchups against the East Coast Wizards on Friday, followed by a game against the Connecticut Roughriders on Saturday.

The EHLP squad on the other hand, will finish off their regular season on the road with a pair of matchups against the Connecticut Chiefs. 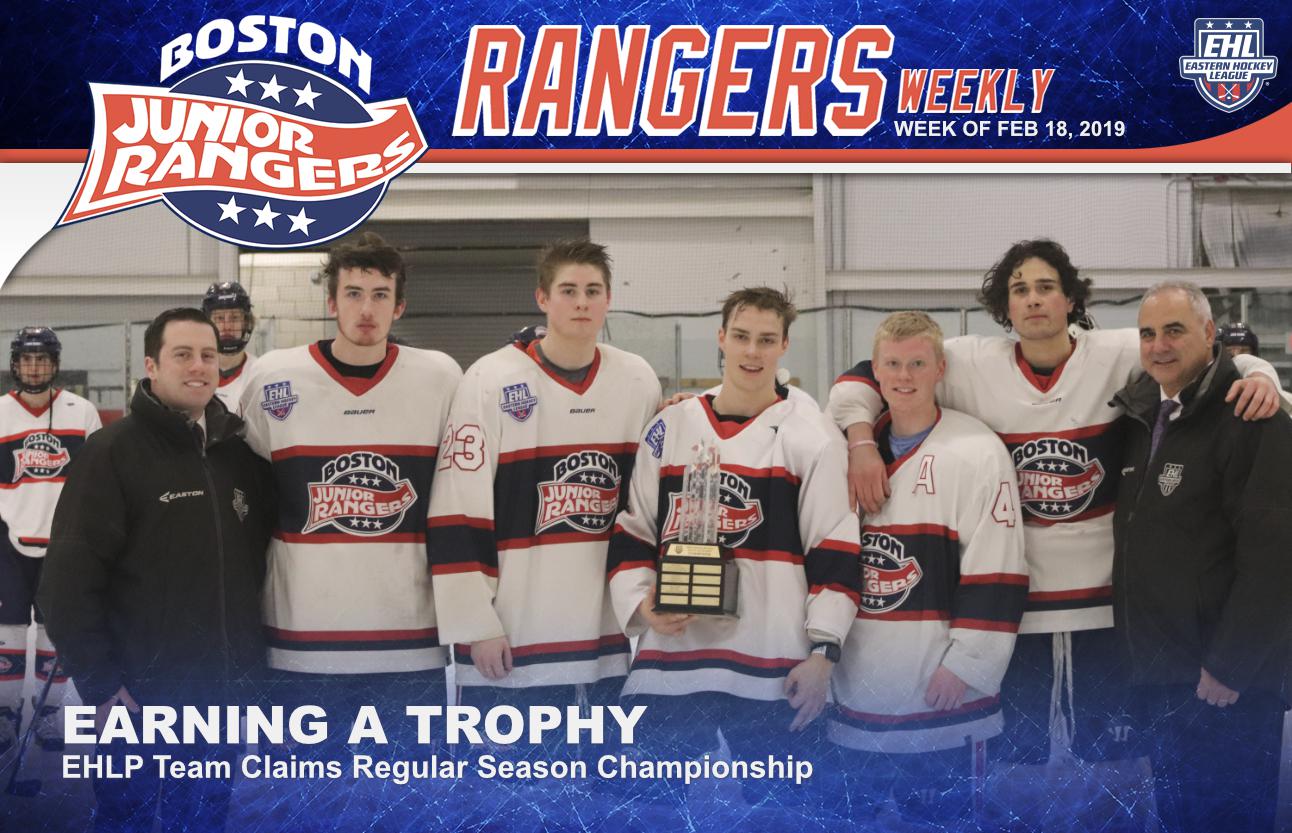