The New Jersey native will be headed back to Massachusetts in the fall to play hockey at Westfield State University. Julian Boisclair currently has 11 goals and 11 assists for 22 points for the Rangers the 2021-2022 season. He also leads the team in game winning goals which has immensely contributed to the Rangers success.

“Julian is a very hard working guy that has a bright future ahead of him,” Coach DeCaprio said. “He is a strong skater and will be a huge asset to Westfield State for the next four.” 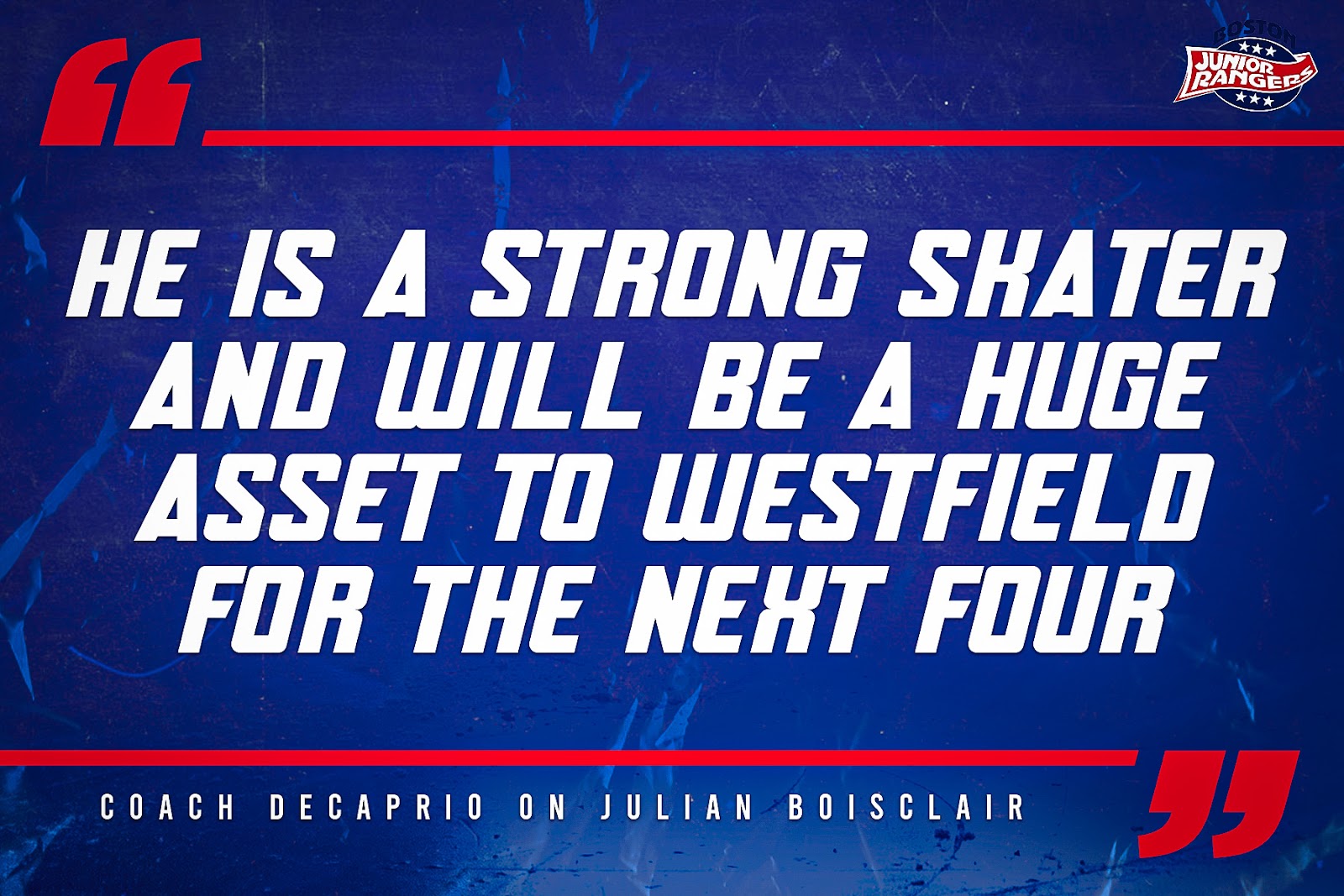 The coach-to-player relationship between Rich DeCaprio and him have greatly contributed to the next step in Julian’s future hockey career. “If it wasn’t for Coach DeCaprio, I definitely would not be where I am now,” Boisclair noted. “He connected me to any coach I was interested in and assisted me with all of my decisions.”

Along with playing DIII hockey, Julian will be pursuing exercise science at Westfield State. He explained, “I am super excited about college after playing juniors for the past two years and getting back to being a ‘normal’ student.” But before heading off to his new team, Boisclair looks forward to finishing strong as he gears up for post-season hockey with the Rangers. 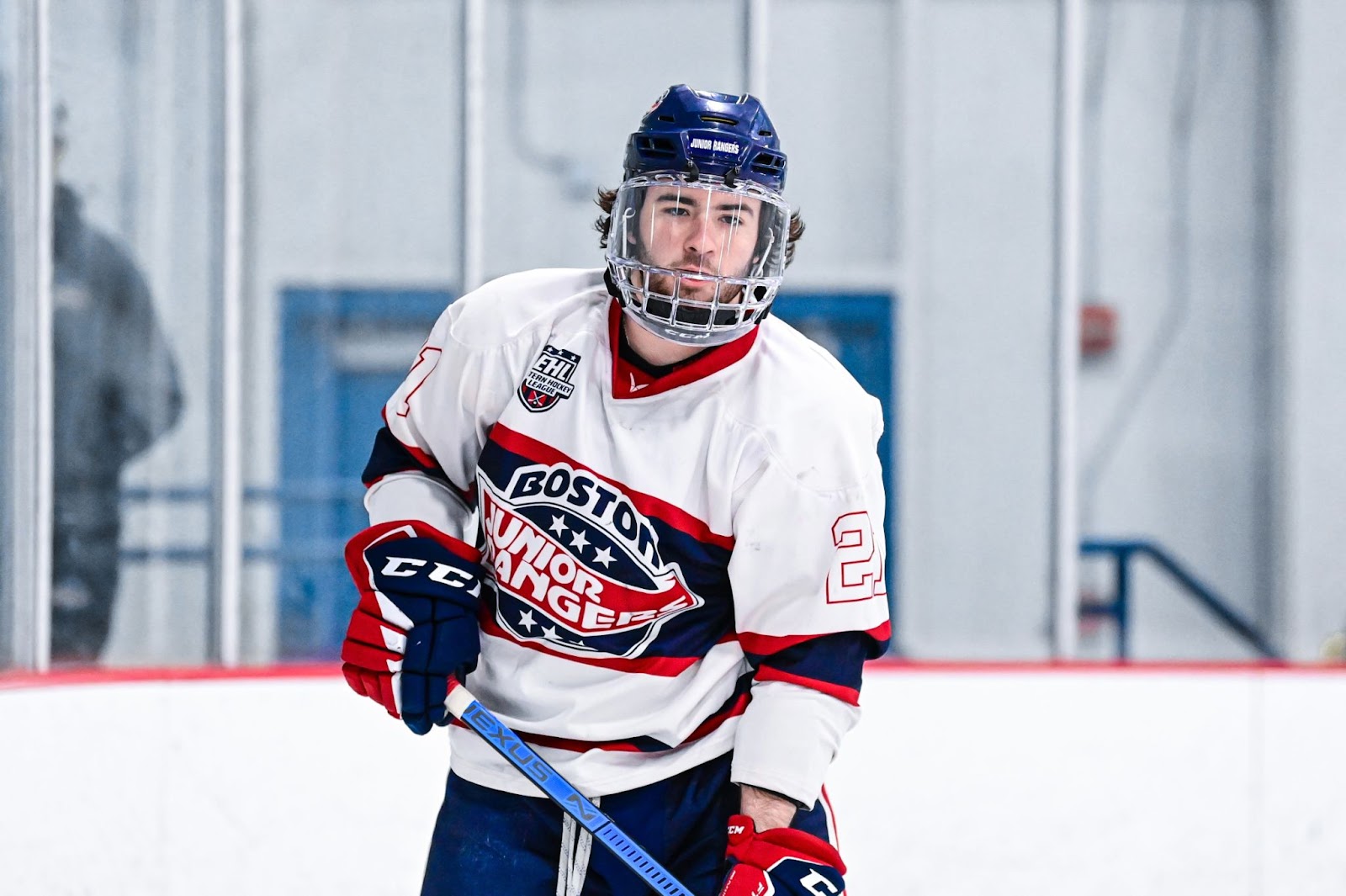 Julian also took the time to recognize those who have helped him make it onto a college roster. “I would like to thank my parents, my trainer Joe DeMarco and all of my past coaches for the help along the way.”

The Rangers are in the home stretch and will look to continue their winning streak this upcoming Tuesday. BJR will face off against the Seacoast Spartans for one final time this regular season.

“Coming out of high school, I definitely was not ready to go to college,” Adam McNabney admitted. “Since coming to BJR, I have matured immensely and learned valuable life lessons from the coaching staff and my teammates.”

Fast forward four years and McNabney has committed to one of the more well-known hockey programs in NCAA DIII. The Baltimore, MD native chose to spend his last year of junior hockey with the Boston Junior Rangers. His ability to move the puck well and stand his ground has contributed to the Rangers’ 24-11-2 season. Coach Rich DeCaprio explained, “Adam is a solid defenseman that’s hard to play against.” 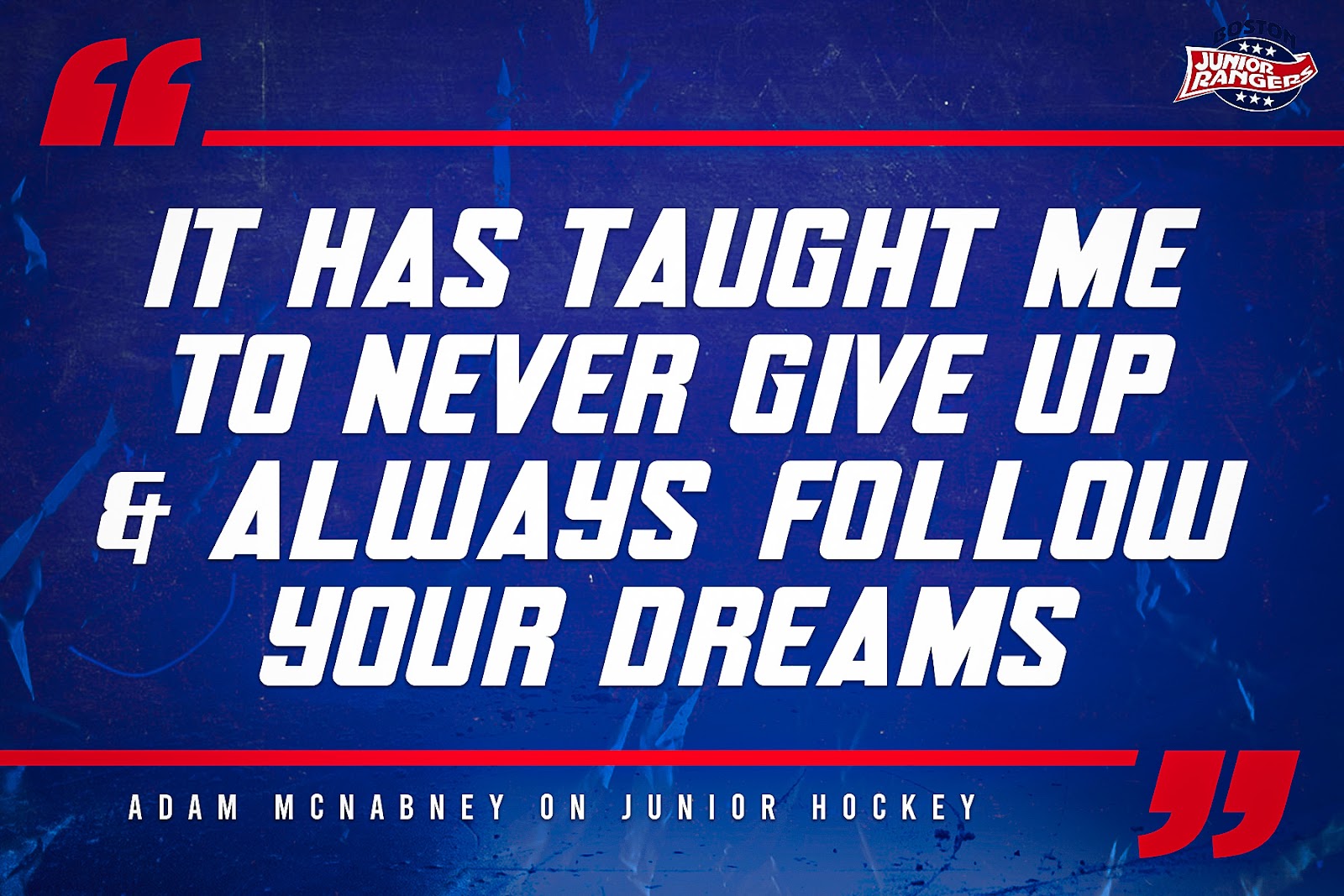 Although it has felt like a long and hard few seasons, Adam reflected on what he learned throughout his junior hockey career. “It has taught me to never give up and always follow your dreams,” McNabney explained. “There have been a lot of bumps in the road throughout my recruiting process, but as long as you stay committed to your goals you are capable of achieving anything you put your mind to.”

Suffolk is widely known for their athletics and ice hockey program specifically. They compete in a very competitive conference that will allow for challenge and fun for Adam. “Suffolk has always been on my radar for their ideal location mixed with their very strong academic programs,” Adam explained. 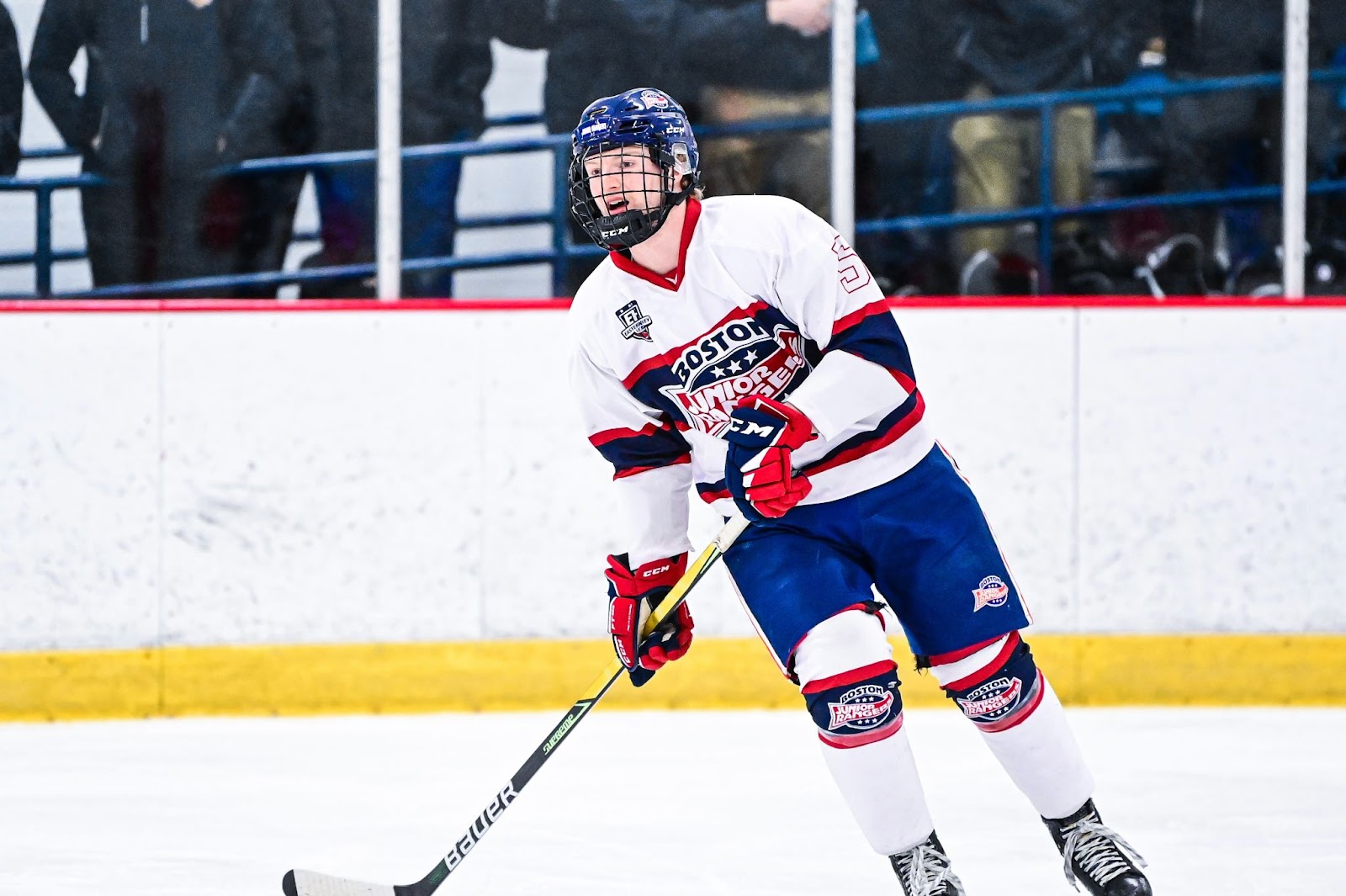 The commit is on track to pursue a degree in the Health Science field and eventually attend medical school after he graduates. “Adam has worked really hard both on and off the ice to earn his opportunity to play hockey and get an education at Suffolk University,” Coach Rich said. “We are looking forward to being able to see him play college hockey close to us.”

Adam McNabney is incredibly excited to attend Suffolk next year. “I want to thank all of my family, friends, coaches, teammates, and everyone else who has helped me along the way,” he said. “Thank you to Coach Glionna and Coach Burgess for giving me this opportunity, and I look forward to the next four years in a Rams uniform.”

“Even though he still has a year left of junior eligibility, he’s ready now to make the jump to NCAA hockey,” explained Coach Rich DeCaprio. Garrison Gagnon has committed to SUNY Fredonia for the fall of 2022. 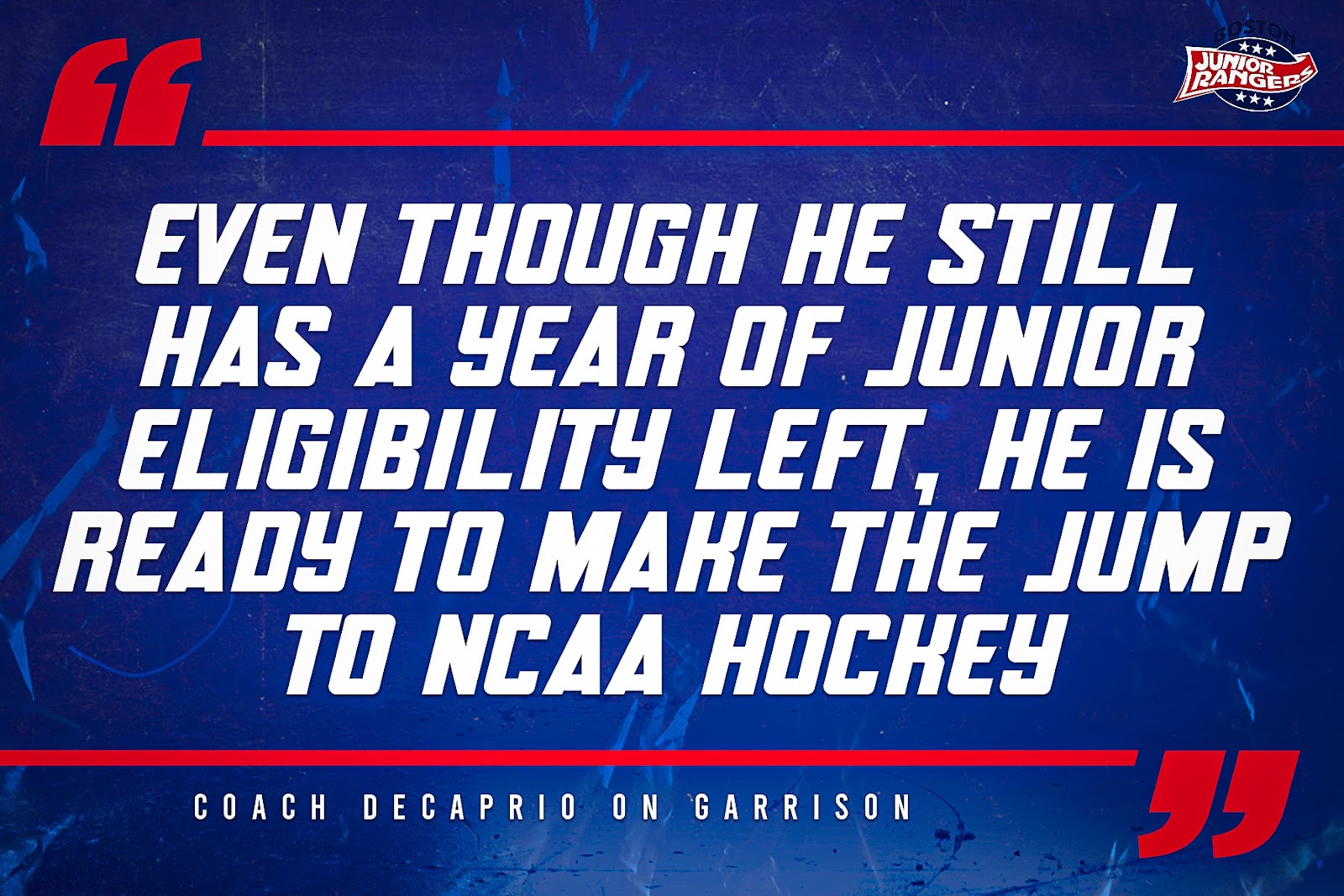 When looking for the perfect fit, Garrison searched for a genuine player-to-coach connection. He truly noticed that on his official visit on campus. “In my first moments arriving at Fredonia, Coach Meredith took me into the locker room where they have alumni plaques on the wall above the stalls,” said. Gagnon. “He was able to tell me everything there is to know about every single person on the walls including their lives after Fredonia now - this amazed me.” SUNY Fredonia is known for Coach Meredith’s connections to his players after they had graduated.

Aside from the coaching, Garrison mentioned his excitement for their compact campus, state of the art hockey rink and varsity lifting room. He is also looking forward to being a part of a school and a team that gives back to the community. “One thing I love about Fredonia is how giving they are to the locals in the neighboring towns,” Gagnon said.

His success does not go unnoticed as Garrison is sure to give credit to his coaches at BJR. He expressed, “Coach Decaprio has helped me to increase my plan to be ready for the next level by providing input and guidance through my college search.” 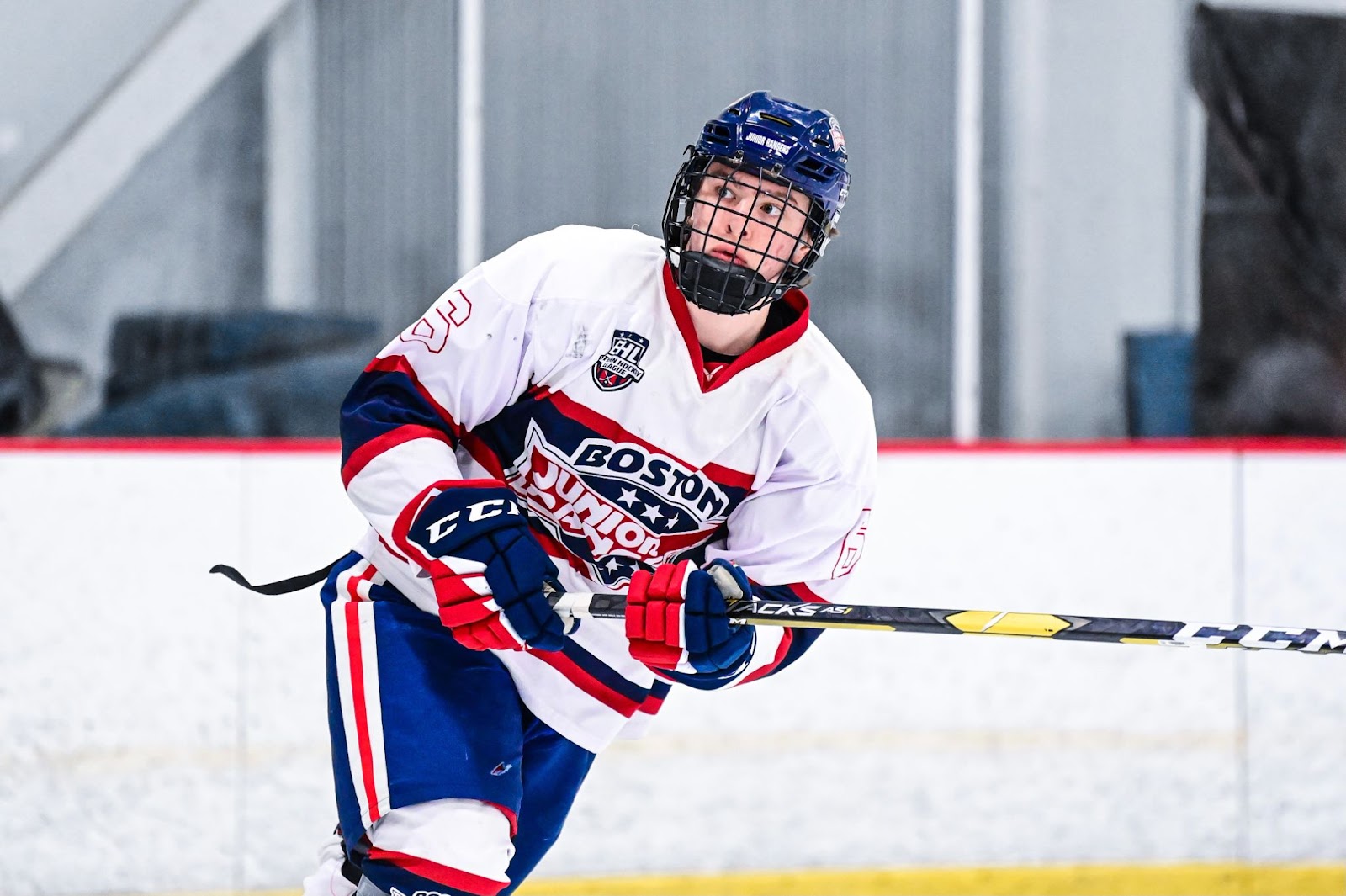 In 26 games, the ‘02 defenseman has put up 11 points. His ability to move the puck and powerful speed has helped the Rangers to improve their overall record to 24-11-2. “We are very happy for Garrison,” Coach DeCaprio explained. “He’s a high energy player that can really skate and defend well.”

Gagnon is planning to pursue a major in exercise science to further lead him into his goal of studying physical therapy.