BOSTON, MA - Dylan Miller, forward for the Boston Junior Rangers, has committed to LVC for the fall of 2022

“We are very happy for Dylan and his commitment to LVC,” said Rangers head coach and general manager Rich DeCaprio. “Coach Parsons is getting a great character kid and player.” 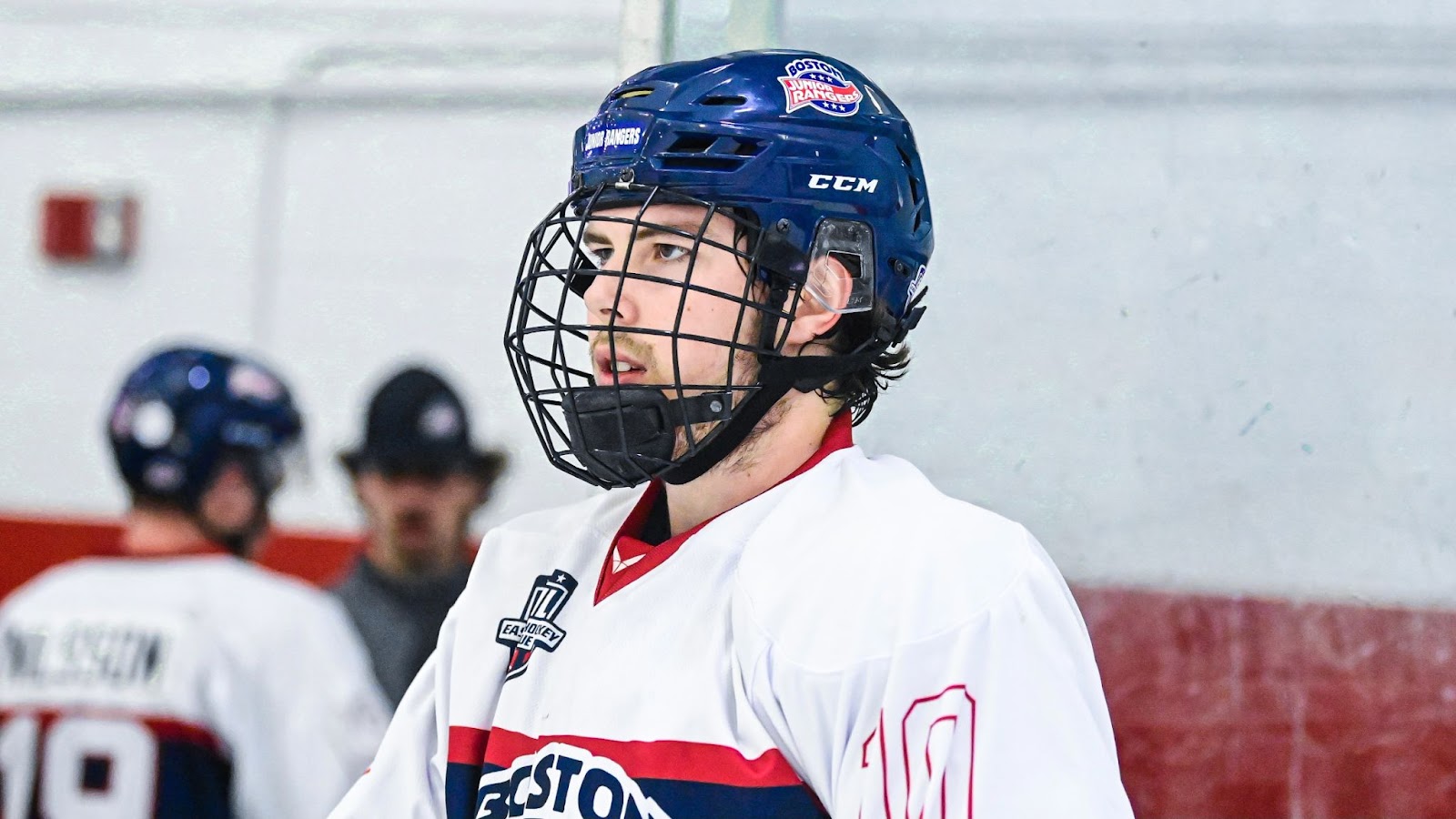 The Michigan native has been playing on the east coast since 2019. With experience in both Tier 2 and Tier 3 junior hockey, Miller is bringing his leadership and talent to LVC. The soon-to-be Flying Dutchmen looks forward to being a part of a UCHC DIII team. “I am really excited for the college atmosphere,” Dylan says. “Growing up playing AAA hockey, I never got the opportunity to play for my school or a team that truly feels like a community.”

Miller’s response to, “Why Lebanon Valley College?” is quite simple-  “It is a great school with a hockey team that is getting better and better.”

Although Dylan feels relief in locking a college for the next four, he emphasizes the importance of his current mentality with the Rangers. Miller explains, “I still need to prove why LVC gave me a commitment.” 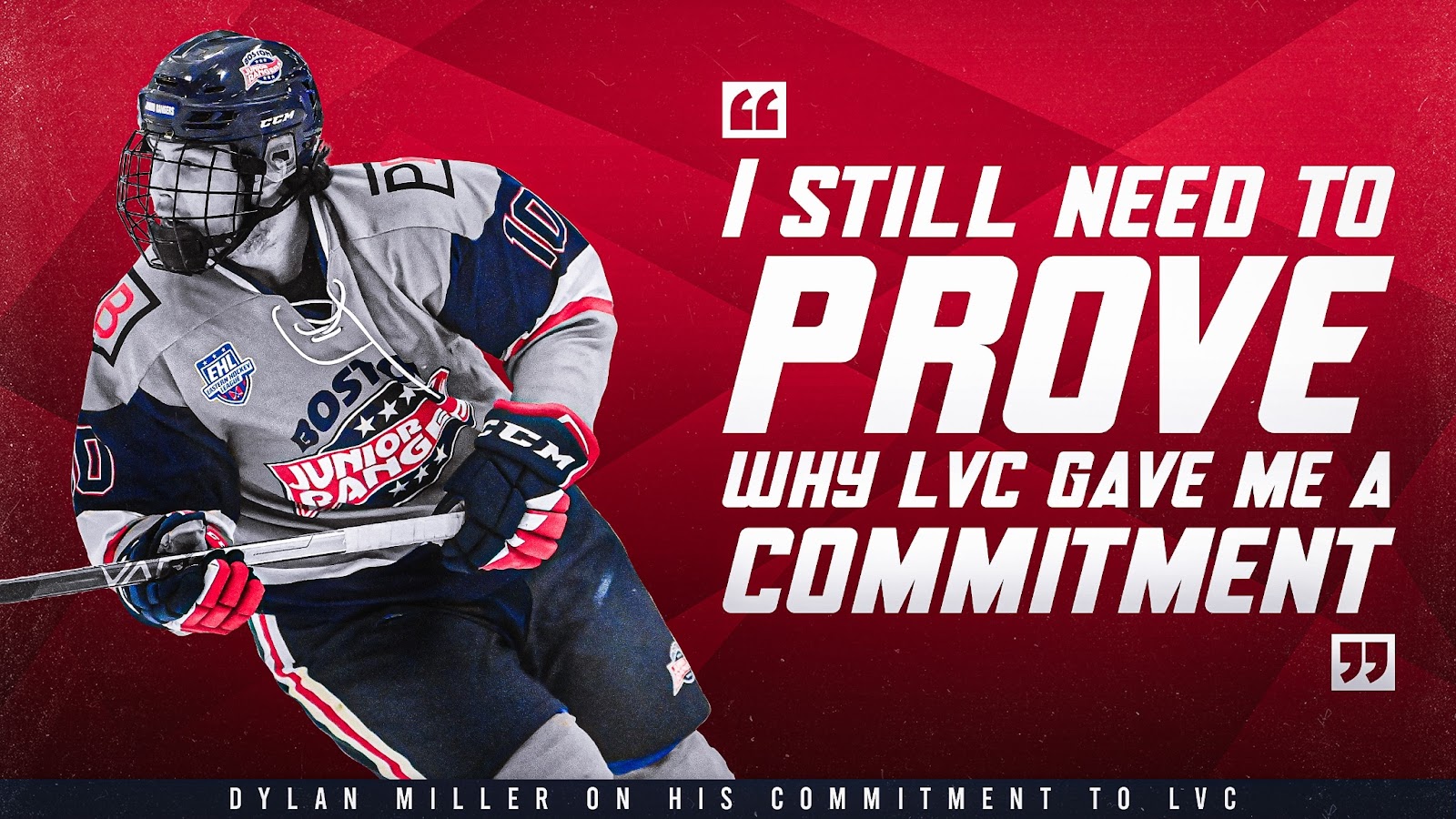 As for the rest of this season, Dylan has his mind set on bringing back another championship to Boston. According to Coach DeCaprio, “His size, skill and ability to see the ice sets him apart from a lot of the players.” With Miller’s talent, BJR is on pace to go back-to-back.

Miller and the Rangers are set for their first matchup against the Wizards this season on Saturday at 7:25 PM.

Tewksbury, MA - “We let last year’s championship settle in for a little while, but we very quickly got back down to business again,” said veteran Jack Karges. “Our title defense starts now.” 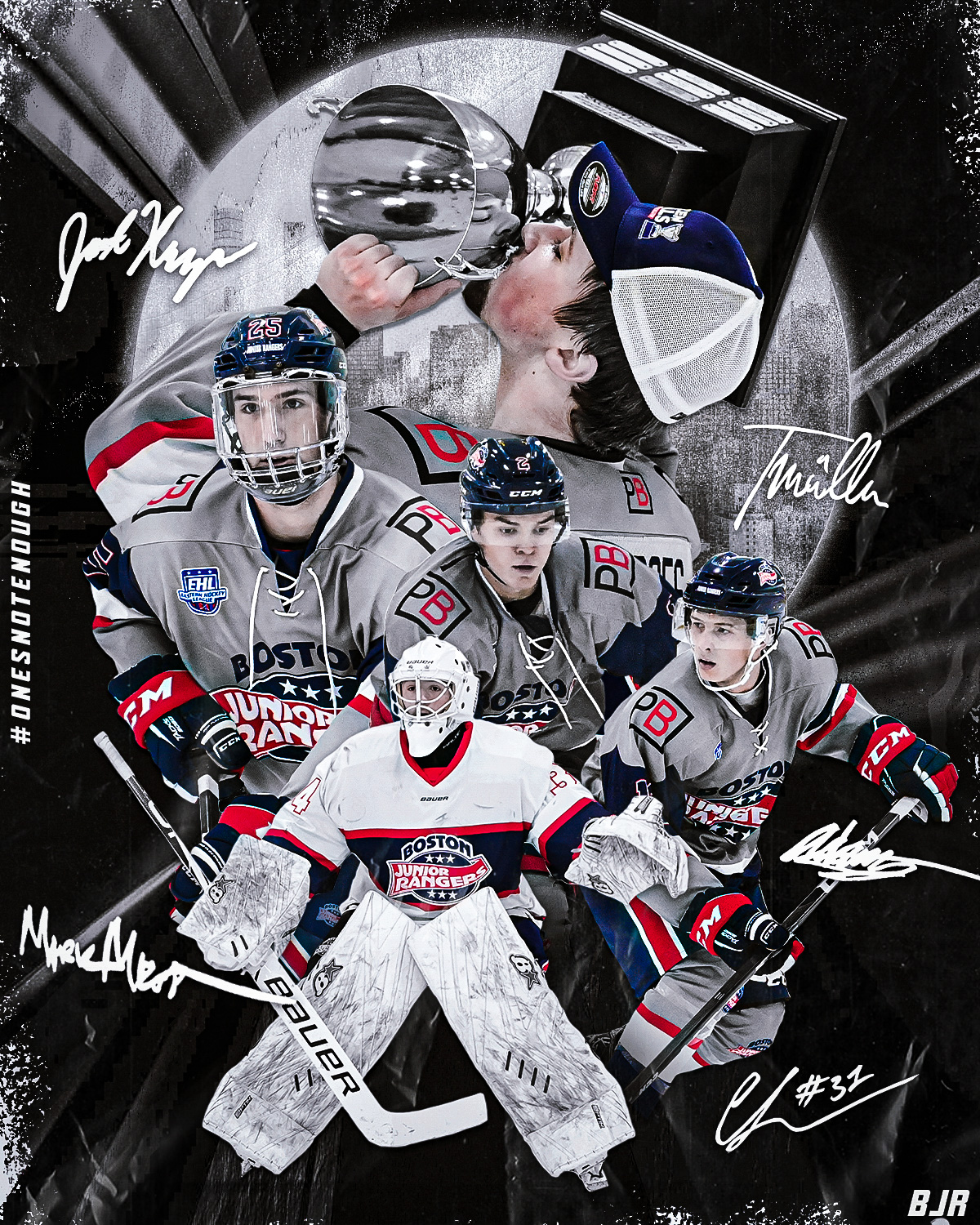 As the intense training camp comes to a close, it is apparent that the reigning EHL Champions are hungry to get back onto the ice. The Rangers officially began their road to back-to-back titles on August 25, 2021. The public were given a glimpse into the on-ice and off-ice training as well as their scrimmages against the New Hampshire Avalanche.

There’s no doubt that the Rangers will be faced with adversity this season. The obvious is that Boston has close to an entirely new roster. With only a handful of returners, five to be exact, the pressure is felt by the veterans to set the tone. Mark Meineke is one of the only defensemen returning from the championship team. “The chemistry is there already,” Meineke explained. “We knew that we were going to lose those big players when they went off to school, so we brought in the right guys to carry the torch.” One of the strongest attributes of the 2020 team was the defensive core. The powerhouse, led by players Jackson Legro and Tommy Carr, left very big skates to fill this season. The coaching staff seem to be very confident in the new guys to fill the gaps. 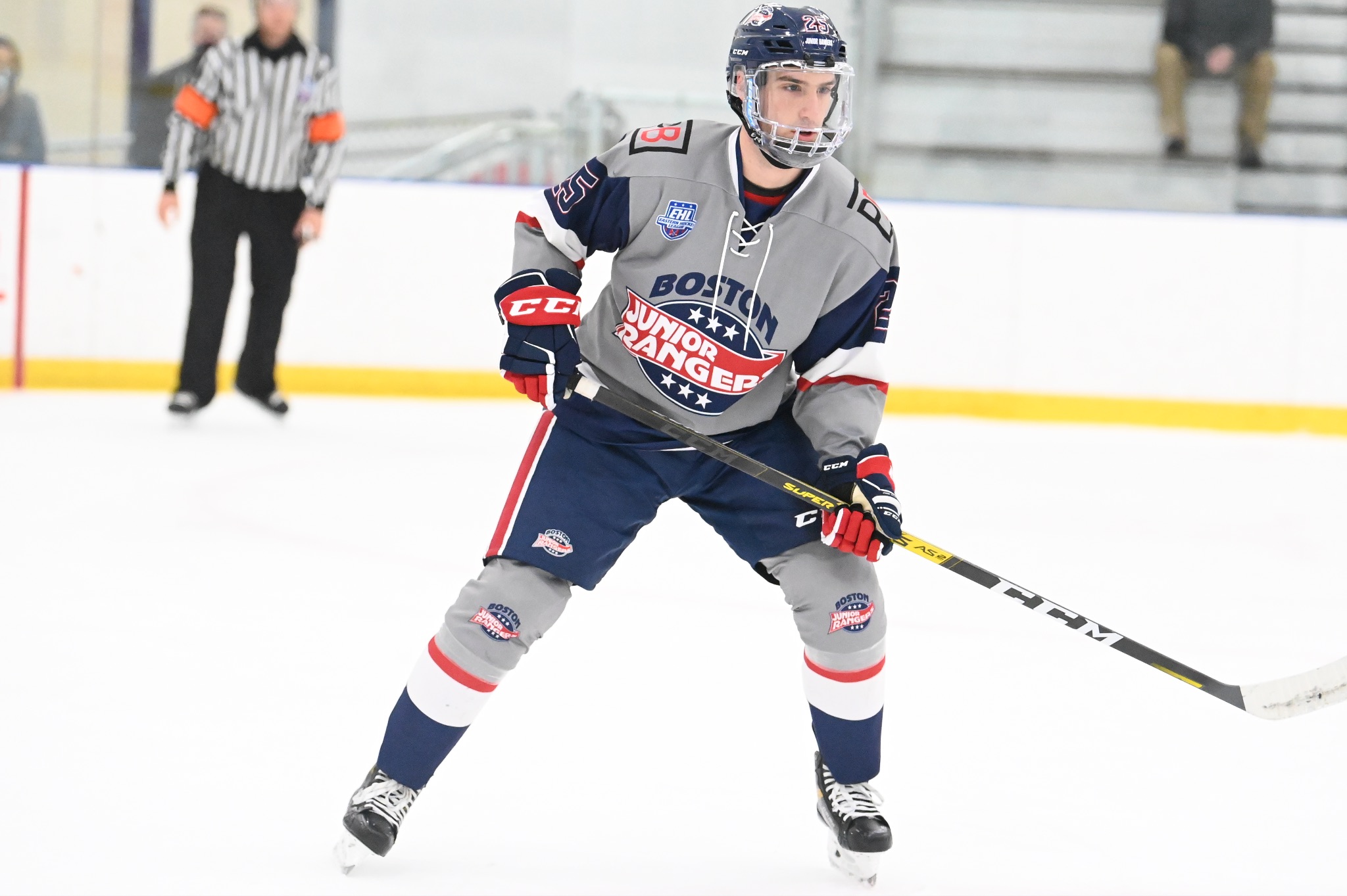 There is a lot of credit to be given to GM and Head Coach, Rich DeCaprio. “Coach Decaprio has been heavily recruiting and making certain to bring in the best players on and off the ice to ensure that we can repeat last year’s success,” said Karges. Throughout his many years of coaching and recruiting, DeCaprio has become adept at adjusting the playbook according to what he does or doesn’t have. What could be looked at as a tremendous challenge to others, Coach looks at it as an opportunity. “Being defending champions for the first time definitely puts a little more pressure on rebuilding a championship team,” Rich DeCaprio explained. “I feel we have a similar team to last year.”

The other biggest contrast between this year and last year is the schedule. Boston will be facing some unfamiliar faces early on in the 2021-2022 season. For the first time in two years the Rangers will meet Southern and Northern conference opponents in the regular season. “Our mindset is the same no matter who we’re playing,” Karges said. “It will be exciting to play new teams this year, but the best thing we can do to prepare for these upcoming challenges is to make sure we’re in the best shape possible as a team to handle any obstacles that come our way.” 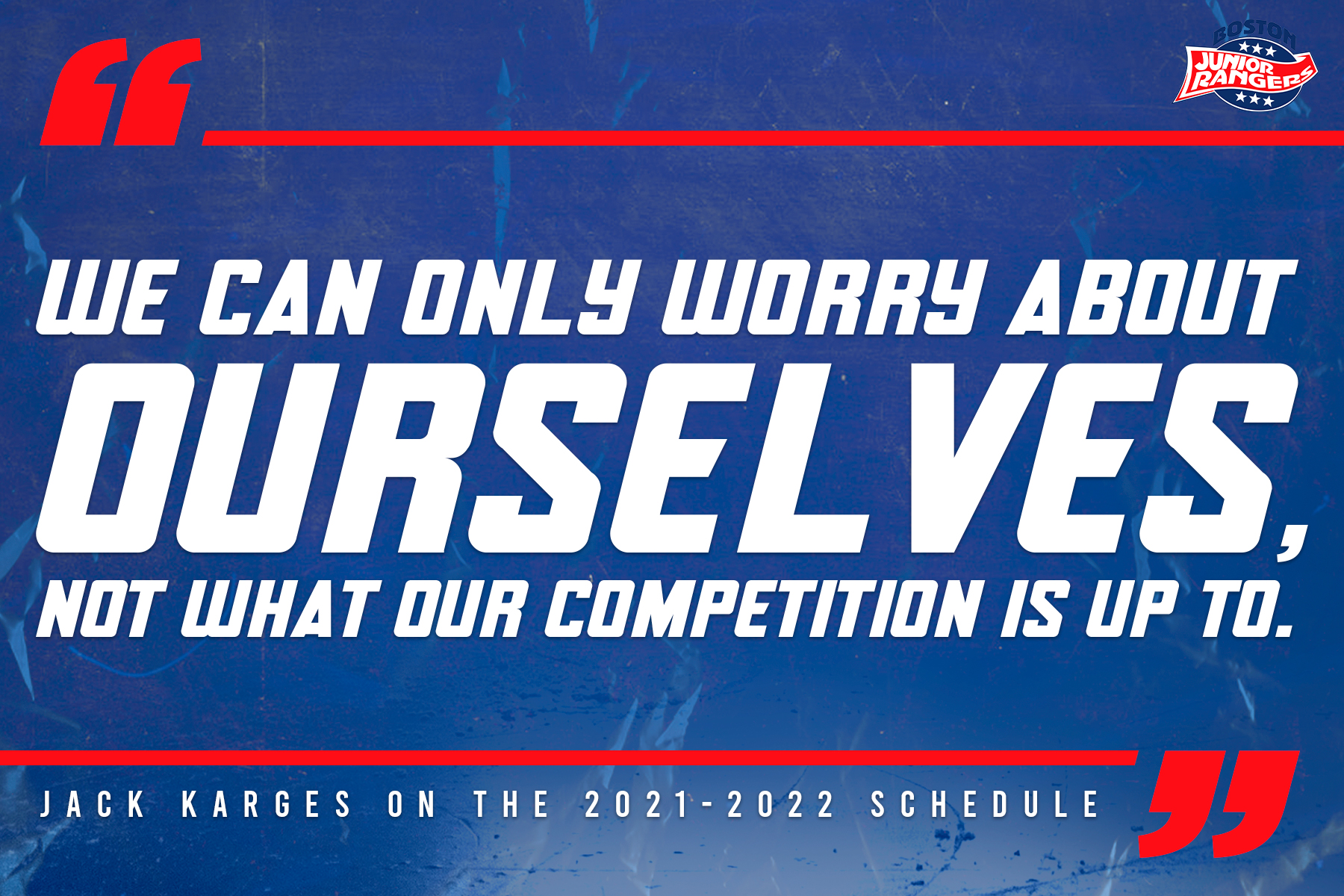 After “Finishing Business” last year with a monumental win in overtime and some championship hardware to prove it, the team has a new motto this season. “One’s Not Enough” will be the three words enforced by the Rangers’ EHL team. It serves as a reminder of what has already been accomplished in the red, white and blue sweaters. It also provides motivation for the hand selected players that have been chosen to represent BJR this season. “We have the opportunity to do something really special with the group we have this year,” said returning forward Adam Zukowski. “I plan to do everything in my power to repeat.”

The Rangers’ first game will take place in Exeter, New Hampshire as they face the Seacoast Spartans for Friday night ice on September 17, 2021.