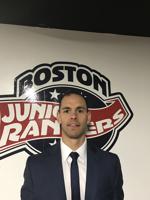 Coach Blair enters his 2nd year as an assistant coach with the Junior Rangers. Along with his coaching duties, Ryan is also the head strength and conditioning coach for Breakaway Total Hockey Training, the host training facility for the Boston Junior Rangers. Ryan comes to the Junior Rangers following an impressive playing career.

A 6'4" defenseman hailing from Ashburn, Virginia, Ryan played his collegiate hockey at The University of Massachusetts-Lowell (Hockey East), where he played in 141 games, and amassed 36 points. After his college career he played professionally in the East Coast Hockey League for three seasons (2011-2014) with several teams, including the Cincinnati Cyclones, Orlando Solar Bears, and the Wheeling Nailers.

Ryan joined the Junior Rangers Staff in June of 2015. His playing experience, along with his positive personality have helped him quickly become an excellent addition to the coaching staff, and an extraordinary asset in preparing players for the next level. 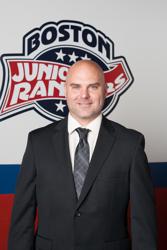 Coach DeCaprio is entering his 13th season as a coach and his 5th with the Jr. Rangers. He was the Head Coach of the MET team for 3 seasons, and is now heading into his 2nd season as the Head Coach and General Manager of the Ranger's top team. New this season, DeCaprio will also be taking over behind the bench for the Rangers' 18U team.

Rich's playing career was also very successful. He played 4 years of Division 1 College hockey at Niagara University, and in 2000 helped his team reach #6 in the country and the NCAA Championships, making it to the Elite Eight. Prior to his college career, Rich helped his team win the MVC Title and Division 1 State Championship as a player at Chelmsford High School (1995), and was named Boston Globe and Hockey Night in Boston All-Scholastic.

Rich also worked as an instructor for The Hockey Academy.